Benjamin Rodney Kevin Breadmore serves as Town Manager and Chief Building Official for the Town of Holden, Maine, population roughly 3,200.  Originally from a small town in western Massachusetts called Ware, he currently lives in Holden. He has a little sign in his home shop that says, “I wasn’t born here, but I got here as fast as I could.”

Breadmore is a graduate of the University of Maine with a bachelor’s degree in public management and minors in public policy and education.  During his time at college,  he had what most would call the best job on campus — the Zamboni operator at the Alfond Arena, home of the university’s Black Bears ice hockey team.

After graduating, he began his  career as a Permit Tech for the City of Brewer, Maine. Shortly thereafter he was promoted to Deputy Code Enforcement Officer, and within a year he was promoted again to Code Enforcement Officer/Building Inspector for the city.  In 2014, he transitioned to the Town of Holden to fill the vacancies of Town Manager and Building Official, and the Economic Development Director, Planner, Road Commissioner and Fair Hearing Officer.

Breadmore holds certifications in all 14 required code disciplines through the State of Maine, as well as being a Certified Health Officer, and a Certified Municipal/County Manager.  Breadmore feels that the best part of serving a small jurisdiction is the opportunity to diversify and learn new fields.  One of those opportunities developed into a passion for development within his community. His position allows him to  help individuals take a business from concept through planning, permitting, construction, and ribbon cutting.  This allows his municipality to add amenities to the community and taxable benefit to the tax payers.

Breadmore was fortunate enough to be a founding member of the International Code Council’s Emerging Leaders Membership Council and served as Chair in 2019. His other accomplishments include:

In 2021 Breadmore  was a contributing author to the 5th Edition of the Building Department Administration Handbook, focusing on Chapter 7 – Department Staffing.

Breadmore has had several great mentors in his life — from family to professional colleagues.  In the field of Building Administration, Stewart Brooks taught him many valuable lessons, but one always rings out above the others.  “An individual can be a spectator or a participant. Don’t be a spectator.”

Breadmore is very honored to be elected to the Board of Directors of the Code Council at 33 years of age and to be from a small jurisdiction.  Ben joined the Board with no promise to change the world, but to offer a perspective from a member that thinks of the Code Council not five or 10 years out, but 30 years and beyond. 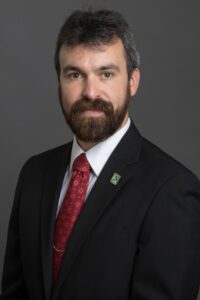