As a Director-at-Large, Phipps said he wants to provide better knowledge and information about what ICC has to offer, especially promoting cdpACCESS, the Preferred Provider Program and ICC’s Assessment Center (certifications). He also wants to make sure information about committees is available to members. 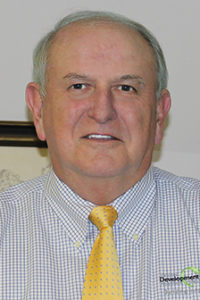 Donny Phipps’s fondness for construction dates back to his childhood, as he remembers.

“My dad was a builder,” he said. “When I was 8 or 9, I used to take pictures of the guys on his crew who weren’t working. Or that’s what he told me, as I don’t remember.”

He also worked with crews as he got older, laying out homes with his dad or older brother, digging footings, framing and insulation work. Clean-up was always his responsibility on job sites as well.

When he was 10 or 12, Phipps was helping on a lumber yard his dad managed. “I was stacking 1 X 4s as they came off the planer and out on a skid to be stacked,” he said. “Later, as they called out pay to the employees, they called my name. I was paid a dollar for about an hour of work.” Later, when he was 18 and 19, he worked the summer driving delivery and logging trucks, stacking slabs, using a cat hook to turn logs for the debarker and other tasks as needed.

After an honorable discharge from the miltary, Phipps went into hotel management for a few years. But he was drawn back into the fold when his father-in-law—who was business license manager for the City of Columbia, S.C.—told him there was a job opening for a housing inspector.

So Phipps began his career in 1975 with that job, and retired 29 years later as the Director of Inspections. He remembers the first person he called when he got the director’s job—after his mom—was his uncle, Fred Phipps, who was the first Building Official for the City of Columbia in 1950-51.

Before his current position with CC&I, a third-party provider that employs him as the building official for Inman, S.C., Phipps was Director of Building Codes and Inspections for Richland County in Columbia.

Phipps sees his election to the ICC Board as another opportunity and challenge to provide service. Phipps has served ICC on the ICC-Evaluation Service (ICC-ES) Committee, Council of American Building Officials, Board of International Professional Standards and the ICC-ES Board of Managers. He is active in the Building Officials Association of South Carolina and has served on its board as well as president. He served on the South Carolina Building Codes Council as Vice Chair, and the Board of Directors of the ICC legacy organization the Southern Building Codes Congress International.

As a Director-at-Large, Phipps said he wants to provide better knowledge and information about what ICC has to offer, especially promoting cdpACCESS, the Preferred Provider Program and ICC’s Assessment Center (certifications). He also wants to make sure information about committees is available to members.

Phipps said he continually keeps an eye out for young talent who can help the ICC in its mission. “I look around to see who wants to get involved; who wants to grow?” And he’ll often bring a couple of younger co-workers with him to state or national code meetings.

Phipps knows it is crucial to bring more young people into the business in general. Working with high school students and colleges is one way to do that. He and his staff hand out CODiE and CODEette Activity books to youngsters from booths at home shows and talk to others about a career in code enforcement. He feels we also need to look at military personnel who are leaving or retiring and have a construction background. The opportunity to bring trained craftsmen to the code industry through the military could be a valuable resource. He hopes to develop a plan with resources from Ft. Jackson, McIntyre or Shaw that are close to Columbia.

Outside of work, Phipps had to give up basketball a few years back under the threat of knee replacement. He still enjoys dancing, walking and a round of golf with friends.

He also enjoys spending time with family, Most of them, like Phipps, haven’t ventured too far from their roots in Columbia. He has a fourth and fifth grandchild on the way soon.

But what he really misses now that he is in administration is sitting down to a good code debate. “People aren’t always going to agree with you. You can discuss the reality that codes are written for their safety. You just have to be firm but fair.”