When Bill Bryant applied for the position of Plan Reviewer for Anne Arundel County, Maryland, it started him on a lifelong mission to create an atmosphere of cooperation and common sense with one goal in mind: “Keeping people safe.” 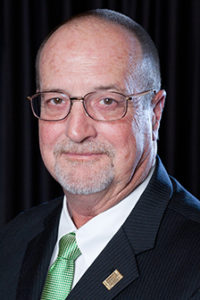 After a few years of observing code development from the industry point of view, Bill Bryant thought it might be time to try the regulatory angle.

By that time, he already had taught construction technology at the high-school level and was overseeing all phases of product design for a major commercial modular manufacturer, a job that required him to work on compliance with building codes throughout a 15-state region.

When he applied for the position of Plan Reviewer for Anne Arundel County, Maryland, in 1989, it started him on a lifelong mission to create an atmosphere of cooperation and common sense with one goal in mind: keeping people safe. Today, he is the Assistant Director of Inspections and Permits for Anne Arundel County.

Bryant helped to shape the consolidation of the three model code groups that resulted in the ICC. He was serving on the BOCA Board of Directors during the late 1990s, when he was named as one of ICC’s first board members.

Bryant remembers the move toward the consolidation as “painful at times. We all knew what the end result was supposed to be. We had to just keep our eyes on that as we trudged along. Each organization had its own way of doing things. There were so many compromises. There also was a lot of thought that went into each decision and a lot of gut feeling. But I think we came up with something pretty special.”

He said he ran for election to the ICC Board for the same reason he got into the business in the first place: He saw a need to find a way to make the codes even better so people can be safer.

“These are really challenging times,” Bryant said. “There is a great need for some clear thinking. We need to revitalize the membership. We have to find out what they want; what they need. We may not be able to give them everything, but we can at least give them an answer.”

The economy has hurt the construction industry and the regulatory industry as well, Bryant said. He remembered bringing co-workers with him to code hearings, “and they loved it. They ask if we can go back. And I have to tell them no, there’s no money.

“We are seeing fewer and fewer people at the code hearings. But when we get the new cdp ACCESS going, everybody will be on the same level playing field. Leading up to the votes, they will see all the documentations and arguments. And then they will be able to vote from wherever they are.

“Now, we have people who just buy the code books every three years. But with cdp ACCESS, they will have the opportunity to get more involved. They won’t be able to say, ‘How did that get in the code?’”

Code hearings often seem to be where building officials and others in the industry discover the fire in their belly that will drive them in their careers. Bryant was no different. Working for a modular manufacturer, he often attended code hearings in various states and for the various legacy organizations.

While he was working for Anne Arundel County, Bryant was mentored by Paul Radaskus, then Director of Inspections and Permits for Anne Arundel County and a BOCA Board of Director member. Paul demanded all management members of the department get involved with the Code Development Process of become a member of a committee. Bryant took those words of advice seriously. Several years later he was approached by then-BOCA Board President Paul Myers, who would become the ICC’s first Board President.

“He said he had seen me at some of the code hearings and on committees,” Bryant remembered. “He liked my passion, my leadership and technical expertise. He said, ‘I think you need to run for the BOCA Board.’ Already I had had some officials tell me that if I wanted to grow professionally, being involved in BOCA or another such organization is the way to go.”

So Bryant, who also served as the President of the Maryland Building Officials Association, was elected to the BOCA Board. After he helped guide ICC, as he says, through the “trials and tribulations” of the consolidation, he became one of the ICC’s first dozen certified Master Code Professionals (MCP).

Bryant wants to have that kind of effect on younger people in the industry. “You don’t see the younger people at code hearings,” he said. “You only see the core group. But with cdp ACCESS we will have the capability to reach out to them on their level through social media.”

Ironically, helping his son ultimately earn a Boy Scout Eagle designation years ago rekindled a passion he had put aside for many years: scuba diving. Now, he’ll dive around Florida for fun, or maybe up the coast a bit closer to home.

Out of the water, he enjoys spending time with his wife, Sherri, and his son and daughter, as well as fishing, hunting, shooting and his true passion: year-round barbecuing.

“I am a barbecue aficionado,” Bryant says with a smile. “When we had those big snows a few years ago, I dug a trench to the grill and around it to keep going all year. A guy has to eat, after all.”