The Educator of the Year Award

The Educator of the Year Award

The International Code Council is proud of the dedication and commitment of its members from around the world. Given in honor of Brent Snyder, a renowned Code Council educator and Past Presiding Officer, the ICC Educator of the Year Award recognizes excellence in promoting professional development.

The 2019 Educator of the Year is Bob Schutz, retired Building Code Official for the City of Columbus, Ohio. 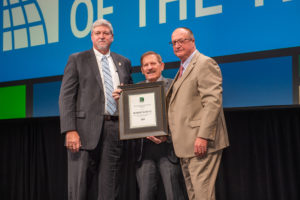