Alabama Nerdettes reach out to ICC 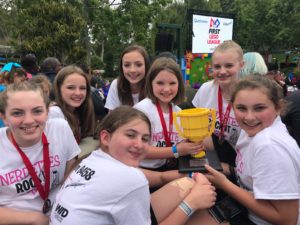 LEGOs have been around since 1950 and have spawned a subculture of movies, games, competitions, and six Legoland amusement parks. More than 600 billion LEGO parts have been produced and the company replaced Ferrari as the world’s most powerful brand.

For a group of young women in Huntsville, Ala., there’s nothing quite like the thrill of building an awesome LEGO creation. The Nerdettes FIRST LEGO League Robotics team is comprised of seven girls — ranging in age from nine to 13 years old — that recently placed first in the Strategy and Innovation category of the FIRST LEGO League International Open held on May 17–20, 2018, in California. The young ladies competed with more than 80 teams from around the world to not only program a robot to perform a series of tasks but also to demonstrate core values, complete and present a project, and discuss the design and strategy they used when designing and programming their robot.

Shawn Strausbaugh, director of PMG Technical Resources for the International Code Council, met with team coordinator Ashley Smith, the Nerdettes group — Ava McIntosh, Emily King, Grace Little, Lina Fernandes, Abigail Burnette and Charlee Burnette — and coaches Melissa and Darrin Burnette after they reached out to the Code Council for help and direction with their invention of a fats, oils and grease (FOG) sensor, which was recently filed for a provisional patent. ICC Evaluation Services President Shahin Moinian will help advance the team’s ideas on their FOG sensor product.

The FIRST LEGO League challenges elementary and middle school students to think like scientists and engineers and provides them and their adult coaches the opportunity to work and create together to solve a common, real-world problem problem. Throughout their experience, teams operate under a signature set of core values, celebrating discovery, teamwork and gracious professionalism. Congratulations to these young ladies on their accomplishments.