Coloring winners: Students illustrate what building safety means to them

Crickett Brinkman has worked in building safety for nearly 25 years; long enough to respect the importance and to know that not many people realize it.

“What we do saves lives,” said Brinkman, regional operations manager for CSG Consultants Inc., in Newman, Calif. “But we don’t get a lot of attention.”

A board member with the Yosemite Chapter of ICC, Brinkman knows Building Safety Month is a great time to heighten the visibility of code professionals. Through her company, she found a fun way to get the message across.

“I just had this brainstorm,” said Brinkman, who also helps the chapter with marketing. “I contacted our local school district, and gave them copies of the ICC activity book on the Building Safety Month website.

“They gave them to their third-graders to read and then decorate the certificate in the back with what building safety means to them.”

Brinkman was thrilled that 34 students participated in the contest. Her staff milled through the decorative submissions and picked a winner, a boy who turned out to have a very special day.

“He won a 24-inch mountain bike, and of course, a helmet, since we’re all about safety,” Brinkman explained. “It turned out he was about to become a big brother and, to top it off, it was his birthday. So of course, I had to get him a cupcake!” 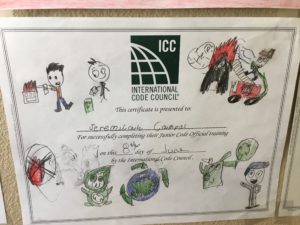 “Crickett is an amazing chapter member, and I think she had a fantastic idea by putting the kids to work to get them to think about what they had learned. And, wow, a bike as the prize! That’s next level!”

Brinkman said CSG Consultants plans to offer the event again. By partnering with local governments, private companies such as hers can provide resources to help other municipalities.

Planting that seed of building safety in youngsters could bear fruit when it comes time for them to consider careers. Brinkman’s company offers CSG Academy, which takes those interested in safe construction and helps them become building and code officials. Already, 10 people in the program have gone on to successful careers, she said.

Brinkman said she’ll continue to think about ways to raise awareness of the importance of what code and building officials do. Already, she has a suggestion for those ICC activity books.

“I’m going to ask if they can put a coloring page in there,” she said. “That’ll make it even more fun.”