An inclusive and transparent code development process relies on participation from a wide variety of stakeholders to submit code change proposals, offer public comments and vote online. But it’s often hard for them to find the time to participate.

Wise says he didn’t come up with the idea, but he certainly has made it his own over the years.

“I’m a generalist,” said Wise. “I tend to watch what other people are doing and synthesize their ideas. I don’t know who came up with the idea of a voting party, but I think I may have added the part about food.”

Originally, Wise scheduled the voting parties during lunch and provided free pizza. But recently he found that mornings worked better for his reps. Now he schedules his voting parties from 8:30 to 11:30 in his office’s conference room. Voting reps sign up for a two-hour session and are given a laptop to watch videos of hearings, read comments and testimony, and review their votes.

Wise even makes sure that an IT specialist is on hand to ensure that everyone’s connections to the cdpACCESS system are working.

Wise said that having the voting party in a separate area is a key component for success.

“If you work at your desks, people will distract you,” explained Wise. “I want to take them out of circulation and give them the time to do it.”

Wise said that he expects to get close to 100 percent participation this year — as he has in the past.

“To get the participation you have to give them the time,” he said. “You can’t expect them to do it in their spare time.”

“And when they finish, they are so proud of getting it done,” he added. 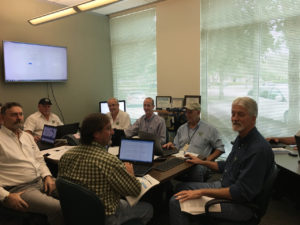