Building inspectors tour a jewel made with wood

The concrete and glass skyline of downtown Atlanta is iconic, but soon a new building will open that will stand out from its counterparts in a dramatic way. And recently, three building inspectors were granted an exclusive opportunity to tour it while still under construction.

T3 Atlanta, a seven-story, 205,000 square foot office building being built in midtown Atlanta’s trendy Atlantic Station neighborhood, will be the largest mass timber building in the United States when completed this fall. The building features floor and roof panels made from dowel-laminated timber, or DLT, installed over a glue-laminated, post-and-beam substructure.

“There aren’t words to express how gorgeous the building looks,” said Doug Maples, CBO, MSM, assistant director of the city of Atlanta’s Office of Buildings. “When you look at the plans, DLT is just another material. But when you see it in place, it’s actually breathtaking.”

Maples toured T3 Atlanta (“T3” stands for “timber, transit, technology”) in mid-March with his friends Mark Matheny, chief code official and building division manager for the city of Asheville in North Carolina, and Stephen D. Jones, CBO, regional manager of Government Relations for the International Code Council. Architects from Hines, the building’s developer, flew in from Chicago to personally guide them around the star attraction.

During the hour-long tour, the three building officials were able to inspect the largely complete DLT installations in the lower floors as well as the basic structures exposed in the unfinished upper floors. The inspectors were struck by how harmoniously the steel and concrete elements of the building complemented the natural wood tones of the DLT.

“It brings just a warm feeling to the building itself that another process wouldn’t,” Maples said of the DLT floors and roofs. “It’s going to be one of the jewels of Atlanta when it’s done.”

“The design uses exposed concrete, so it’s very industrial looking,” noted Jones. “The contractors used wood planks to form the concrete, and the panel grain shows up in face of the concrete. It’s a very nice look.”

DLT, also known by the trade name DowelLam, is an all-wood mass timber panel consisting of dimensional lumber that is joined by wooden dowels running the length of the panel. The dowels and lumber are then bonded by glue. DLT can be assembled into panel sizes of up to 12 feet by 60 feet and can be made from a variety of timber species. StructureCraft, the timber engineering and construction firm supplying the DLT panels for the T3 Atlanta project, provides DLT panels in thicknesses ranging from 3 inches to 11.75 inches and a variety of finishes and profiles to suit individual projects.

The DLT panels are installed in sequence with a lateral support system consisting of perimeter and internal steel-brace frames. “These things go together like an erector set,” said Jones.

Matheny explained that because DLT is a new product in the United States, the components must be sourced from several places — the beams from Austria and the floor systems from Canada.

“Part of the challenge with DLT right now is the logistics,” said Matheny, who organized the tour. “There were dimensional barriers and language barriers too.”

Although DLT promises to be cheaper to manufacture than other forms of laminated timber, Matheny said that scaling up to mass production will be necessary to accomplish that.

“You can’t do a one-off and expect it to be cost-effective,” Matheny said. “I think that part of the goal, among other things, is to get DLT to be a standardized product.”

As with any new building technology, Jones said, there will be a learning curve. He cites as an example the use of engineered lumber, which has become ubiquitous after initial trepidation. “People are more comfortable using technology that they know,” Jones said. “It’s going to be interesting to see, as this technology advances, how construction techniques change.”

“Time will tell if it’s a fad, but the data supports that this type of construction is compatible with the code,” Jones said.

Matheny agrees. “Any time that you can include a new building product into our industry, that’s an advantage,” he said. “It doesn’t have to be a complete system. Big or small, you’ve added to the number of tools available. And once we get to the point where we can standardize the product, it becomes easier to use for the whole industry.” 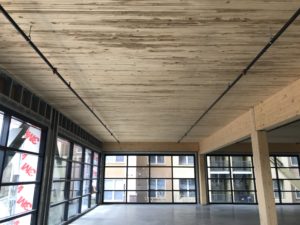