California town on the rebound after devastating wildfire 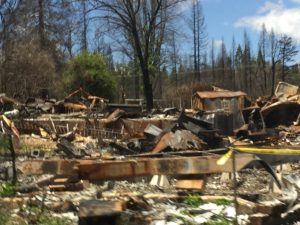 In the 10 months since nearly being destroyed by California’s deadliest wildfire, the Sierra Nevada foothill town of Paradise, Calif., is slowly coming back to life. Considering that only about 10 percent of the town’s original population remains, its rebirth is a testament to how far the town has come in that time — and also how far there is yet to go before life can return to something like normal.

Over the course of two weeks in November, the Camp Fire — named after the place where it started, Camp Creek Road — burned over 153,000 acres and killed at least 86 civilians. At its peak, the fire consumed around eight football fields of land every second. Several sources estimated the total amount of damage to be over $16 billion, and in the town of Paradise alone an estimated 14,000 homes were destroyed.

“Simply put, what I saw was just devastation,” said International Code Council Government Relations Senior Regional Manager Chris Ochoa, who toured the town in April. “I had the chance to go look at Santa Rosa after the Tubbs fire, and Redding after the Carr fire. Those were horrific as well, but Paradise was another level. In essence, it was the decimation of an entire town.”

A recent door-to-door survey found that just over 2,000 of the town’s pre-fire population of 26,000 remained. Only 1,300 original structures were left standing within the town’s 18 square mile boundary.

Ochoa reported that the single road in and out of town was “just a mess,” because the extreme heat of the swiftly moving fire had melted the asphalt. That damage had played a part in hindering evacuation of the town during the fire, he added.

Ochoa recalled visiting a restaurant in town that had been spared — but no one was allowed inside due to benzene contamination of the town’s water supply, which was likely caused by a combination of super-heated plastic supply pipes and contaminated debris washing into the water supply system. As a result, Paradise residents had to obtain their meals and drinks from an army of food trucks stationed in parking lots.

“In a way it’s almost like a mobile city right now,” Ochoa explained. “You see the resilience of the town, of the people who stayed. The cleanup alone is going to take a lot of time, but people are committed to rebuilding.”

As the town began to pick its way out of the ruins, Paradise’s town council entered into a four-year contract with the engineering firm 4LEAF to augment the town’s plan checking, permitting and building inspection staff, many of whom moved elsewhere because they had lost their homes and possessions in the fire. Craig Tole, the director of development services at 4LEAF, said that the company has established a separate permitting department to expedite rebuilding. Thanks in part to 4LEAF’s assistance, the town was able to issue its first permits for new construction less than four months after the fire.

Tole said that although it’s hard to compare the aftermath of the Camp Fire with those of other past wildfires, that amount of foot traffic is a heartening sign that the town is rebounding.

“It’s tangible for sure,” Tole said. “It translates into rebuilding. I think it will come back.”

That’s not to say the rebuilding will be a painless process. For Lucas Chapman, 4LEAF’s chief building official and senior building inspector, the Camp Fire was a very personal experience. The fire consumed the house that Chapman had spent many years building by hand, killed the child of a neighbor and nearly killed his wife who was among a contingent of residents who had been notified of the impending fire too late to evacuate and took refuge in the town’s Kmart, which was ringed by firefighters who stood their ground as a last line of defense against the blaze.

“We have 1,100 permits that have been issued,” Chapman said. “We’re doing building inspections on new buildings, and we’re doing some remodel and permitting and inspection work on commercial buildings. These permits are for people who are coming back to build, to re-establish.”

Paradise was established in 1979, and most of the homes that were lost to the fire dated from the early 1980s, when the state’s fire codes were much less stringent than they are today. 4LEAF and the town council are ensuring that the permits being issued now will result in the construction of safer, more resilient homes.

“It is crucial for me that these people understand it isn’t like it used to be,” Chapman said. “We follow plans and codes now.” That includes the establishment of combustible-free defensible spaces around homes and installation of fire alarms, sprinkler systems and fire-resistant roofing materials in accordance with the latest International Codes and National Fire Protection Association standards.

From talking with fire marshals about the outcomes in Paradise and other fire-ravaged towns in California, Ochoa said that most of them feel that the current codes work. “One thing that is clearly needed is education,” Ochoa explained. “We need to educate people that it’s great to live out here, but you have to take precautions.”

Among the most important of those precautions, Ochoa said, is ensuring that a home’s built-in defenses aren’t compromised. “Some of these homes are built to the highest standards of fire protection, however what we don’t know is whether, when the fire was upon the home, did the owners leave a window or a door open while evacuating?” Ochoa said.

For example, in the Tubbs fire of October 2017 — which, until the Camp Fire, had been the most destructive wildfire in California history — some people were forced to drive through their garage doors to escape the fire after power outages had trapped their cars inside. The resulting hole in the home’s defenses provided an easy point of entry for the fire after the residents had fled. 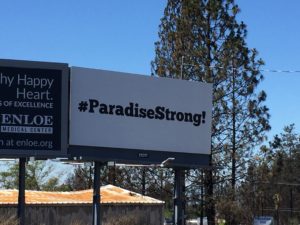 “The fire marshals I’ve spoken with believe that the state fire code is working for the most part,” Ochoa said. “The State Fire Marshal’s Wildland Urban Interface Task Group, of which I’m a member, has been working all year to discuss revisions and potential new options for the Wildland Urban Interface code in California as well.” California’s Wildland Urban Interface code, which went into effect over a decade ago, mandates the use of defensible space and ignition-resistant structures to help reduce the risk of loss by fire. Tole and Chapman said that the town is committed to ensuring that all new buildings in Paradise will be built to those strict standards.

Looking at Paradise’s future prospects, Chapman predicted that, “in three to five years from now, we’re going to have a viable town. But it’s going to take a while.”