Many code officials know that Chicago is home to the Central Regional Office of the International Code Council. What many don’t know, however, is that until this year, Chicago was the only major American metropolitan area that had not yet adopted the International Building Code.

“Being a world-class city and attracting the talent and businesses that keep our economy growing requires that Chicago is at the top of national standards from the ground up,” Emanuel said in a press release announcing the code update. “We are modernizing our building code for the 21st century to advance sustainability, make construction more cost-effective, and continue our city’s reputation for innovative design and world-renowned architecture.”

Not only that, but America’s Second City is also one of the nation’s first to adopt the 2018 International Building Code, leapfrogging many other jurisdictions in ensuring that it will be on the cutting edge with modern construction technologies and streamlining its code implementation and enforcement. The Chicago Building Department — led by Commissioner Judy Frydland with Deputy Commissioner Grant Ullrich — put time and resources into the project. The review process was organized and inclusive. We are thankful to the diverse building community comprised of architects, engineers, realtors, builders, contractors, labor, fire service and many other stakeholders who urged and then fully supported the mayor’s decision to move forward with the update of the Chicago Building Code.

This double-barreled accomplishment represents not only a major milestone for the Code Council and the city of Chicago, but also for Sara Yerkes, senior vice president of Government Relations for the Code Council. This is something that she has been aspiring to see happen for over a decade.

Although the Code Council had been encouraging Chicago to adopt the International Codes (I-Codes) since they were first published in 2000, a number of factors made that a challenge, Yerkes said. The city did adopt part of the International Plumbing Code, but that was about it.

That all began to change following the election of Mayor Emanuel in 2011. During his first term, Emanuel appointed Judy Frydland as the department commissioner, and she has remained there since then. Focused on reforming the city’s complex permit processes, Frydland was quick to grasp the benefits of updating the city’s idiosyncratic building code.

At the same time, Yerkes had been meeting with stakeholders in the city’s building community to gauge their support for a major code update.

“We asked them a single question: ‘If the ICC put the effort into working with the city to introduce the International Building Code, would you be supportive?'” Yerkes said. “Obviously we weren’t going to do this without their support.”

“There was not a single no,” Yerkes said.

Such was the enthusiasm and support for the idea that whenever Emanuel spoke before the building community, someone would inevitably raise the question of when Chicago would start the process of adopting the codes.

“It got to the point where the mayor finally came to Judy [Frydland] and said, ‘I don’t know what these I-Codes are, but you have to look into this,'” Yerkes recalled. 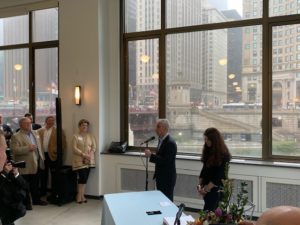 In April of this year, (at Mayor Emanuel’s last City Council meeting) the Chicago City Council unanimously voted to approve the the comprehensive modernization of the city’s building code. The rewritten code will introduce new requirements for a wide range of building materials, require the installation of sprinkler systems in all new non-residential construction and apartment buildings, and adopt risk-based structural design requirements for single-family homes.

The new code will also address the conversion of basements and attics into living spaces, broaden the options for preservation and rehabilitation of historic buildings, and overhaul the city’s guidelines for constructing energy efficient buildings. Just as importantly, the new building code will adopt seismic design requirements for public safety facilities and tall buildings and — to the applause of architects, engineers and developers across the country — adopt the International Building Code’s standardized terminology and classification systems.

“This modernization advances building safety in the city, contributes to creating consistent codes across the state and will help Chicago attract more business,” Yerkes said when the city council voted to approve the code overhaul. “We’re proud to support the city of Chicago as it moves forward with this historic update.”

“I think this is going to be a great step in the right direction for Chicago in terms of business development, economic success and attracting more companies to the city,” she added.

The transition period moving from the old code to the new code will get underway in June and is expected to run through August of next year. Next, the city will undertake another round of updates to other codes, including mechanical and plumbing.

“The commissioner was very clear that this is not the end,” Yerkes said. “This doesn’t end here for us with the adoption of the I-Codes. This is just the beginning of our relationship with Chicago. We will support the city with code interpretations, with training on the codes, and by helping the staff transition from what was old to what’s new.”

“There will be a lot of information that is very new to their inspectors and users of the code, both for the regulators and the regulated community,” Yerkes added. “But we’ll get there.”

Did Yerkes and her staff consider last month’s announcement to be a symbolic accomplishment as well, considering that Chicago is where the Code Council’s Central Regional Office is located?

“Absolutely, and we’re going to have a big party this summer to celebrate with members and our employees in the Chicago office. I worked with a great team and had wonderful representation in the city. It is important that the staff behind the scenes get to share the success. Every person at the Code Council contributes to our successes with the work they do day-in and day-out to facilitate the code development process, provide training, code interpretations, government relations, business development – everyone plays a role – so we want everyone to celebrate Chicago,” Yerkes said. “It’s a big deal exactly for that reason. This is our own backyard. Chicago is a major city, and an iconic city; the whole world knows Chicago. I love the city and have a lot of respect for the city employees there who are so committed to their city and dedicated to public safety.”

It’s also a matter of personal pride for Yerkes, during whose tenure all 50 states and major jurisdictions have adopted the I-Codes.

“I have told my colleagues that I could not retire without bringing Chicago on board,” Yerkes said. “It was on my bucket list.”