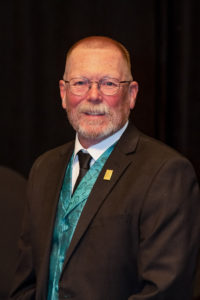 Jim Brown didn’t start out wanting to be a building official. That desire built slowly and steadily, as if he were tracking a 10-point buck in the woods. After gaining the discipline and focus necessary, he was able to capture certifications, experience and, ultimately, the respect of his peers who elected him to the International Code Council Board of Directors during the ICC Annual Conference in Portland, Ore. He is the first Code Council board member to serve from the state of Wyoming, including the legacy code organizations, according to Wyoming Chapter historian Bruce Wilson.

As deputy building official for the city of Gillette, Wyoming, Brown was “proud and humbled” by his election as a director at large. He believes a lot of it had to do with the fact that he was instrumental in pulling together Region II for the Code Council, which includes Alaska, Washington, Oregon, Montana, Wyoming and Idaho.

“People had been trying to do it for years,” Brown said of organizing Region II. “But this time, it was the right time. And we had the right people.” Those people included his mentor John Darnall — a Gillette, Wyo., native; former Code Council board member, and building and fire official for Tumwater, Wash. — and Bruce Wilson, chief building official in Cheyenne, Wyo. “And the board recognized Region II at the Annual Conference in Portland.”

That trail began in Carroll County, Md., where Brown was born, attended high school and worked until he entered the United States Air Force in 1976. He was trained as a life support specialist/forward air controller/survival instructor, responsible for the inspection and maintenance of air crew life-support equipment such as flight gear, parachutes, survival kits and ejection seats. He also trained recruits as a survival instructor.

But after four years and attaining the rank of sergeant, Brown said he passed on a military career like his father, who served 35 years with the U.S. Army. Instead, he decided to go back to general contracting around Carroll County, something he had done just before he entered the Air Force. He helped build homes in the county, included in the Baltimore–Washington Metropolitan Area, where the rural atmosphere attracted high-profile clients.

“We built for several players on the Baltimore Orioles,” he said. “One of them was (Hall of Famer) Eddie Murray. They were 5,000 to 10,000 square feet. I also worked on some McDonald’s and Wendy’s restaurants. That’s where I got some experience in commercial work.”

As he was building these McMansions, Brown became intrigued with the code process and code officials, even after becoming a lead carpenter. “I liked the longevity of their business,” he said. “Meanwhile, my back, hands and arms were hurting.”

So, when Carroll County was looking for a building inspector in 1988, Brown applied. And to his shock, he was hired. But county officials knew he needed training. “And that’s when my formal education in the codes began,” he said. “With the Council of American Building Officials’ One and Two Family Dwelling Code.” Brown was also assisted in his early years by the county’s plans examiner Richard (Dick) Owings, who took him under his wing setting the stage for what was to come.

After a promotion to commercial plans examiner in Carroll County, Brown jumped at the chance to become commercial and residential plans examiner for the city of Gillette, Wyo., in 2005. He found out about the position opening in Wyoming through the Code Council’s online career center. After teaming up with Wilson and Darnall, whom he had met at an Annual Conference in Baltimore, Brown continued his mission of forging alliances among building and fire officials, but this time it was for the membership of the Wyoming Conference of Building Officials (WCBO) and the International Code Council. He remembered how fired up he got watching the old Building Officials and Code Administrators International hearings. “They opened up a whole new world.” He wanted to do the same for others.

Before he knew it, Darnall was nominating Brown for a director’s position on the Code Council board while at a WCBO meeting in Cody, Wyo. Brown was thrilled with the possibilities, including moving full speed ahead on cdpACCESS. “cdpACCESS is absolutely critical for engaging more of our membership,” he said.

The move to Wyoming also gave Brown a chance for another passion: hunting. “I grew up hunting,” he said. “Bear, deer… Maryland, Virginia.” Now, he’ll get out to fill his tags for deer, and maybe get some elk along the way. He and his wife Patty also enjoy trail riding. Brown plays acoustic stand-up bass — a special gift from his parents — which is a 1938 Kay model that has brought him many years of joy.

They also enjoy their grandson, Wyatt who was born in Wyoming, courtesy of daughter Amy and her husband Josh. Wyatt already has been out prairie dog hunting, fishing, four-wheeling, and on horseback Brown said. “And I love it all.”

And maybe someday he’ll have the chance to tell Wyatt about codes and how they’ll continue to help keep him, and the rest of the world, safe. And the Code Council can grow with him.

“The ICC is relatively young,” Brown said. “We will be setting a course that will take us through 2025. We have very, very exciting times ahead.”