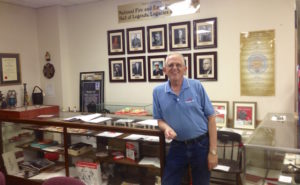 After a distinguished 30-year career at the U.S. Fire Administration (USFA) and its National Fire Academy, Powell now is the executive director of the National Fire Heritage Museum in Emmitsburg, Md. During his years with the USFA, he served as chief of citizen and community preparedness with responsibility for all things fire prevention, including the promotion and use of construction safety codes.

Rob Neale, vice president of ICC National Fire Services Activities, said, “I worked with Wayne at USFA and have never met a person more passionate about instilling prevention and protection strategies into the men and women who attended the National Fire Academy. To many of us, Wayne is indeed ’Mr. Fire Prevention.’”

Powell’s career spans more than 50 years and has included responsibilities in operations, prevention, training, administration, sales and fire protection leadership advocacy. He is an integral participant within the National Fire Heritage Center archival project based in Emmitsburg. The project preserves historical written documents from the history of fire in America — all related disciplines — and provides mechanisms for public access for purposes of research and formal documentation.

Powell travelled worldwide for Marriott International as a fire and life safety specialist for eight years conducting fire inspections in Marriott’s 21 different hotel brands. Previously, he had been one of the longest-serving members of the USFA and its National Fire Academy where he served for nearly three decades.

He spent many years with the fire services in Silver Spring, Montgomery County, Md., and the Angus Fire Corporation. He also was an instructor for the University of Maryland Fire and Rescue Institute. From 1968–69 he served in the military as an U.S. Army infantry staff sergeant in Vietnam. During his time at the National Emergency Training Center in Emmitsburg, Powell also served more than 30 years as an active member of that community’s all-volunteer fire department, the Vigilant Hose Company. He holds life member status in both the Silver Spring VFD and the Vigilant Hose Company. Additionally, he is a member of the steering committee for the Vision 20/20: National Strategies for Fire Loss Prevention initiative, and serves on the National Advisory Committee for FIRE CORPS.

Robert Neale served as the vice president of national fire service activities for the International Code Council. He was responsible for strategic guidance to help local fire organizations adopt and enforce the most recent version of the model codes and build relationships among code enforcement entities. In 2015, Neale retired as Deputy Superintendent for the United States Fire Administration National Fire Academy in Emmitsburg, Md. He led the development of curriculum aimed at improving the professionalism of America’s fire service.