The three new types of construction are defined and included in Section 602.4, Chapter 6 — Types of Construction of the 2021 IBC. Additionally, requirements were added to other chapters of the IBC, including Chapter 5 — General Building Heights and Areas, Chapter 7 — Fire and Smoke Protection Features, Chapter 17 — Special Inspections and Tests, Chapter 23 — Wood, and Chapter 33 — Safeguards During Construction, among others. Collectively, these new requirements allow the use of mass timber and cross-laminated timber (a type of mass timber) for buildings of taller heights, more stories above grade and greater allowable areas compared to existing provisions for heavy timber buildings. Up to 18 stories and 270 feet for Type IV-A construction in certain occupancies. 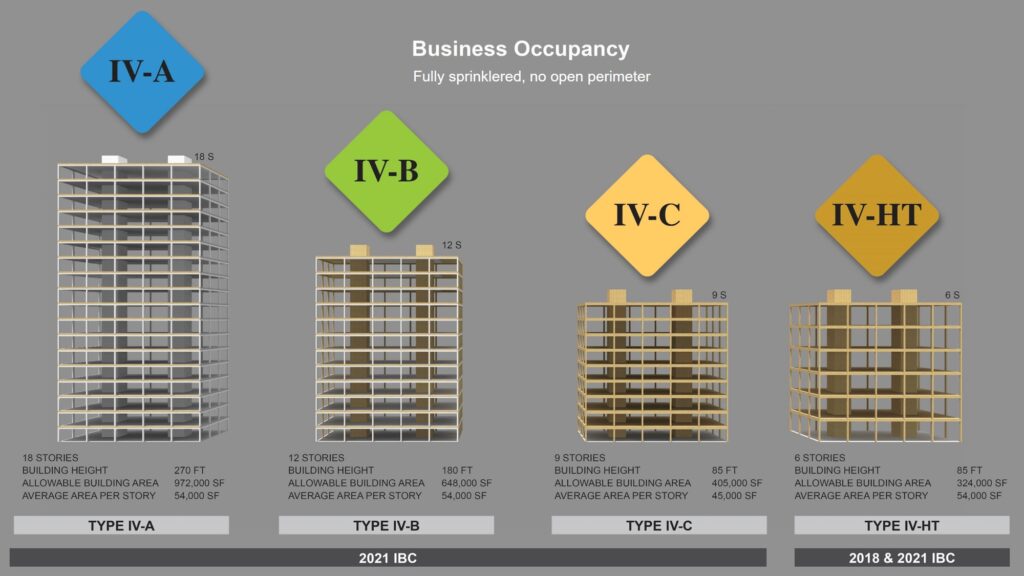 The 1927 Uniform Building Code (UBC) — published by the legacy model code organization the International Conference of Building Officials — included five construction types as shown in the table. In the 1949 UBC, “Type IV — Metal Frame” was changed to “Type IV — Light Incombustible Frame.” The 1952 UBC introduced Table 17-A, a precursor to IBC Table 601, which redefined construction types based on fire-resistive requirements. In the 1976 UBC, Table 17-A was revised to define Types I and II as noncombustible and Types III, IV and V as combustible. This format remained through the 1997 UBC.

Given the anticipated demand for taller mass timber buildings, it was deemed in the best interest of the building safety community to develop comprehensive and enforceable construction requirements. At the July 9, 2015, meeting of the Code Council Board of Directors, the American Wood Council requested the establishment of a technical committee to study the introduction of building and fire code requirements to permit construction of taller mass timber buildings. Consistent with Council Policy #07-04, anyone may petition the Code Council board for the establishment of a technical committee when “…an issue of concern to the International Code Council” is brought to their attention. The Code Council board decided to survey its membership on the need and support to study tall wood buildings during the fall of 2015. “The Code Council board carefully considered more than 160 comments from stakeholders prior to establishing this committee,” explained Code Council Board President Alex “Cash” Olszowy, III. “Many of the comments emphasized the need for the Code Council to comprehensively investigate all aspects of this new construction technology, acknowledging its design flexibility, significant sustainability attributes and the potential economic impact to our nation’s built environment.”[1]

In recognition of the array of benefits provided by large mass timber buildings, but also cognizant of the fire safety implications of taller buildings constructed with combustible materials, the Code Council board established the Ad Hoc Committee on Tall Wood Buildings (AHC-TWB) in December 2015. The AHC-TWB was tasked with exploring the building science of mass timber and, if supported by the science, investigating the feasibility of, and act on, developing code changes for safe tall mass timber buildings. Any such proposals were to provide assurance to the public and the fire service that code-compliant tall mass timber buildings have rigorous and redundant systems of fire protection, both passive and active, suitable for the mission of protecting the public and fire responders.

More than 60 applications were received for membership on the AHC-TWB. In March 2016, the Code Council board announced committee appointments. The AHC-TWB was ideally suited to the task of exploring the science and creating proposed code changes, consisting of subject matter experts, including members of building departments, architects, structural engineers, representatives of testing laboratories, representatives of multiple structural materials, and the fire service, including firefighters, fire chiefs, and fire protection engineers.[2]

To address these criteria, and in response to the very large body of technical subject matter to evaluate, four workgroups were formed; anyone with an interest in tall mass timber buildings could participate. These workgroups included: Standards/Definitions, Fire, Code (Height and Area) and Structural. AHC-TWB members were surveyed to develop an extensive list of issues and concerns to be addressed during the study period. Eighty-two specific items were identified and assigned to the most appropriate workgroup. Each issue was thoroughly discussed at the workgroup level and findings were provided during each of nine in-person meetings held by the AHC-TWB over the course of three-and-a-half years of study.

As anticipated, the greatest challenge for the AHC-TWB involved developing an approach to compensate for the combustible nature of the material while recognizing its inherent fire resistance and fire performance. The first step was to develop a protection system that would result in a performance akin to that of existing Type I-B construction,  then, assigning fire resistance requirements to a proposed new construction type (IV-B) for mass timber buildings. The same process was used to evaluate IV-A and IV-C in turn.

One AHC-TWB guiding principle was that it would not propose any requirement that had not been tested and they determined fire testing was necessary to validate their established performance objectives. Consequently five, full-scale, multiple-story fire tests were developed to simulate the three new construction types (Types IV-A, IV-B and IV-C). The successful results of those tests, as well as testing for structural performance in accordance with ASTM E 119, Standard Test Methods for Fire Tests of Building Construction and Materials, and additional testing by others, helped establish the basis upon which the AHC-TWB developed new mass timber code provisions.

Mass Timber Buildings and the IBC 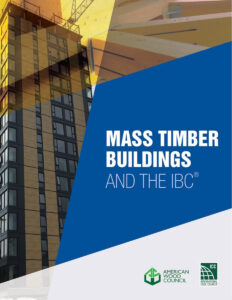 In July 2020, a document titled Mass Timber Buildings and the IBC was published cooperatively by the American Wood Council and International Code Council culminating several years of effort. This document provides an overview of provisions for mass timber construction as found primarily in the IBC. Cross-laminated timber (CLT) is a relatively new engineered wood product increasingly being found in U.S. construction markets. Changes to the 2015 IBC to recognize CLT and reorganization of heavy timber provisions in the 2018 IBC set the stage for historic changes in the 2021 IBC and International Fire Code (IFC) for tall mass timber construction.

This document is valuable for instructor-led programs on mass timber and new tall mass timber design and construction. For training, the document, the IBC and material standards can be the basis for instruction. Similar to ICC Significant Changes documents, each chapter begins with a summary, the specific sections of the code under consideration and background on the code change significance or topic being discussed. Each chapter addresses specific IBC chapters where mass timber construction is applicable and may include provisions from the 2015, 2018, and 2021 IBC (or 2021 IFC or 2021 IECC).

As noted, the 2021 IBC will include new provisions in Chapter 17 for special inspection of tall mass timber buildings. Realizing the need for people experienced and knowledgeable in this new area of construction, ICC established an Exam Development Committee (EDC) responsible for developing the certification exam for Tall Mass Timber Special Inspectors. The EDC is already hard at work (virtually of course) developing and scoring exam questions with a goal to launch the new program on PRONTO this fall.

“Our committee has had some insightful discussions during the development of this exam and we are very excited to see this exam come to fruition,” said Eirene Knott, MCP, CBO, CFM, chair of the Tall Mass Timber Special Inspector Exam Development Committee and director of Code Services for BRR Architecture. “It is an honor to serve as a chair of this committee as we create a new exam for a newly created construction type. We feel it further serves the vision and mission of the Code Council.”

Ray O’Brocki, Manager of Fire Service Relations for AWC and member of the Tall Mass Timber EDC had this to say about the special inspector certification program: “Because adhering to the building code is essential in all types of construction, the American Wood Council is eager to work with ICC in the development of the Mass Timber Special Inspector curriculum. This type of construction is a sea change in tall building construction. The special inspector certification will ensure that the individuals conducting these inspections will have the necessary knowledge to verify critical elements of a mass timber building were constructed safely and as per the code.”

Several full-day webinars on new tall mass timber provisions have been provided via ICC’s learning center. Also a cooperative effort between ICC and AWC, the course dovetails with Mass Timber Buildings and the IBC. Attend a full-day virtual course in August or November and receive the book and six hours of education credit.

Back to the original question about the last time a new construction type was added to the codes. Perhaps this is a first. Are we seeing history in the making? These are exciting times in the code development world! 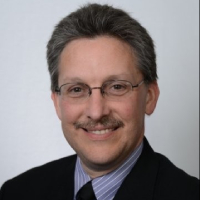 Buddy Showalter is a senior staff engineer with the Code Council's product development group. He develops technical resources in support of the structural provisions of the International Building Code and International Residential Code. Showalter reviews publications authored by the Code Council and engineering groups, while also developing publications and technical seminars on the structural provisions of the International Codes for building departments, design engineers and special inspectors. He is the project lead in the development of Mass Timber Buildings and the IBC and associated education programs, jointly developed by the Code Council and the American Wood Council. A graduate of Virginia Tech, Showalter has also been a member of the editorial board for STRUCTURE magazine for more than 15 years. Before joining the Code Council, Showalter spent 26 years with the American Wood Council where he oversaw its technology transfer program with oversight responsibility for publications, website, helpdesk, education and other technical media. He has more than 34 years of experience in the development and support of building codes and standards, publishing more than 60 technical articles for industry-related trade journals.

During the maintenance window, these intermittent outages may impact an exam candidate’s ability to purchase, view, schedule, and/or launch an examination from the ICC website, including myICC. Also, the access to services like Digital Codes Library may be impacted. We apologize for the inconvenience and thank you for your patience