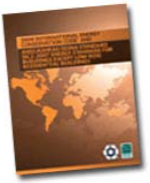 The International Code Council and the American Society of Heating, Refrigerating and Air-Conditioning Engineers (ASHRAE) have teamed up to publish the 2009 International Energy Conservation Code (IECC) and the ANSI/ASHRAE/IESNA Standard 90.1- 2007, Energy Standard for Buildings Except Low-Rise Residential Buildings in one book. The new publication results in a powerful document that government can use to qualify for federal energy grants, and a guide for the construction industry to build or retrofit homes and buildings to be more energy-efficient.

The decision to create the joint publication resulted from the recent “economic stimulus” legislation passed by the U.S. Congress, known as the American Recovery and Reinvestment Act of 2009 (ARRA). The Act establishes an energy efficiency goal of 90 percent compliance with the IECC and Standard 90.1-2007 in all 50 states by 2017. In establishing this goal, the federal legislation recognizes the 2009 IECC and Standard 90.1-2007 as the energy efficiency benchmarks for residential and commercial buildings.

Because the Code Council and ASHRAE documents complement each other, publishing them in one book benefits architects, designers, engineers and code officials. It makes it easier to choose between design options, and ensures new and renovated buildings are in compliance with the latest references and local building safety codes.

Experts agree increasing energy efficiency in the built environment is an effective way to reduce energy use and carbon emissions. Residential and commercial buildings use more than 70 percent of electricity consumed in the United States, and small increases in building efficiency can achieve major energy and carbon emission savings, according to the Code Council and ASHRAE.

“As green and sustainable design have become increasingly central to the definition of building safety, our charge—and it is, I believe, the great professional calling of our generation—is to establish what role building codes should play in facilitating, promoting and regulating energy efficient buildings and this expanded concept of safety,” said Council, CEO Richard P. Weiland. “We are pleased to partner with ASHRAE to serve the goals of our government and the needs of our planet.”

“Since being published more than 30 years ago, Standard 90.1 has been one of the building industry’s most important benchmarks for energy efficiency,” Jeff Littleton, ASHRAE executive vice president, said. “The publishing of the standard and the IECC as one document will build on that strong history, driving the development of more energy efficient buildings and building codes.”

To purchase a copy of the 2009 International Energy Conservation Code (IECC) and the ANSI/ASHRAE/IESNA Standard 90.1- 2007, Energy Standard for Buildings Except Low-Rise Residential Buildings as one publication, visit www.iccsafe.org/IECC90.

ASHRAE, founded in 1894, is an international organization of some 51,000 persons. ASHRAE fulfills its mission of advancing heating, ventilation, air conditioning and refrigeration to serve humanity and promote a sustainable world through research, standards writing, publishing and continuing education. ASHRAE and the Illuminating Engineers Society of North America jointly developed Standard 90.1.