May is Building Safety Month. As part of this celebration, we want to recognize professionals whose combined efforts contribute to the awareness of building safety.

Test Developer/Program Manager Doug Hatch may live and work in California, but he’s much more a Doer than a Dreamer. Doug, who has been with the Code Council for 27 years, has worked as a high school history teacher and master electrician before joining what is now ICC.  A tireless and passionate worker, Doug offers a rich perspective on his tenure with ICC- as well as some photographic treasures!

AC: ICC was established in 1994, merging three code organizations into one model family, which included BOCA, ICBO, and SBCCI.  When did you join what is now ICC, and what was the name of the code body?

Doug: I joined in March 1991 working for the International Conference of Building Officials (ICBO) in Whittier, CA.

AC: What was your first position with the company?

Doug: I worked as Senior Certification Coordinator and then later was over Test Development and marketing of exams to new jurisdictions. 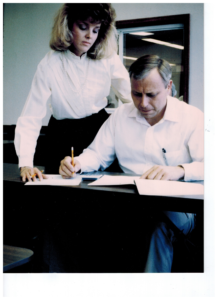 AC: What period in your tenure with ICC have you seen the most change as such affects our customers and stakeholders?

Doug: Of course, the merging of the three model code groups into ICC was one of the most significant changes.  We were all code publishing organizations doing the same kind of work.  But when we merged, it became like blending families where we all had our own ways of doing things and then worked at becoming one big happy family which we are today.  Now I can call a co-worker in another office in another state who I hardly know, except for their name, and feel that we’re connected.

AC: If one was to travel back to the early days in your job, what would be most surprising about the company and the testing department?

Doug:  We all dressed up for work each day.  When I first started, the men all wore white shirts and ties every day.  We had company picnics every three or four months where the staff’s families were invited on an evening or weekend for family games and food.

When I first started, we didn’t have email so we would step over to the co-worker’s or boss’s office and talk.  What a concept; actually talk about the work projects!  If we needed to have something in writing, we wrote memos and dropped them in the person’s in-box on their desk.  We’d look for new things in our in-box on the corner of our desks like we look for emails in Outlook today.  In the testing department, we only did paper/pencil testing.  We didn’t think of it as paper/ pencil testing but just testing, until computer-based testing came along.  A big change was CBT where the candidates could get their results immediately.

AC: What gets you the most excited about your job?

Doug: The best part of my job is working with co-workers and with the committee members.  The Exam Development Committee members are the top in their fields or professions.  It has been such a rich experience working with them and developing friendships that have lasted over many years.   Also, what is steady is the idea that my job is based on the principle of public safety which we sometimes take for granted.

AC: What would you want younger people considering a job in the code industry to know that might be a surprise?

Doug: For someone brand new from the public who doesn’t know much about building code enforcement; that inspectors are not mean.

AC: Do you ever sleep?

Doug: I try to, but with so much on my mind and so much work to do, I don’t get as much sleep as I’d like.