A true story of a fire service giant 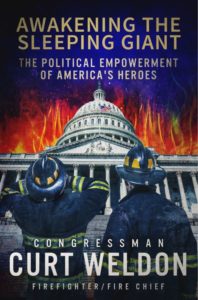 Fire fighters and first responders are the backbone of the United States, serving in 32,000 departments mostly as volunteers and protecting communities every day from numerous types of disaster. A new autobiography by Wayne Curtis “Curt” Weldon — “Awakening the Sleeping Giant” — puts a modern spin on the history of the fire service and the creation of the Congressional Fire Services Caucus. Founded by Weldon in 1987, the Caucus works closely with the Congressional Fire Services Institute to unite Republicans and Democrats in an organized, nationwide support of fire service legislation that benefits all first responders.

The Caucus does not push partisan legislation — although members are free to introduce and support legislation as they see fit — but instead exists to support the fire service in each member’s district. For more than 30 years, it has been one of the largest and most successful bi-partisan caucuses in Congress, supporting national, state and local firefighters and raising funds for the families of both professional and volunteer fire men and women.

Composed of real tales filled with tragedy and pain, emotion and passion, humor and good will intertwined with true stories from his own life as a fire fighter and fire chief, the book tells Weldon’s story from growing up in a fire service family, joining the fire department, becoming politically active and making a difference in Washington, D.C. The book details the values, beliefs and ethics that drive his life; outlines how local fire departments can gain proper recognition and support; and documents the vision, creation and success of the Congressional Fire Services Caucus as a passionate advocate for the country’s fire service and first responders. Weldon demonstrates that fire fighters and first responders in America and around the world can build bridges of understanding and cooperation so needed in today’s conflict-ridden times.

A lifelong resident of southeastern Pennsylvania, Weldon has visited fire departments in all 50 states, and as a member of the United States House of Representatives from 1987 to 2007 representing the 7th district of Pennsylvania, he established the Congressional Fire Services Caucus to ensure that fire fighters and emergency workers have the resources they need to protect Pennsylvanians and people throughout the country. His bill that implemented a federal grant program for local fire departments evolved into the Assistance to Firefighters Grant Program. And he has fought for mandatory safety sprinklers in college dormitories and training of fire departments to deal with terrorism incidents involving chemical and biological weapons.

Weldon was the recipient of the International Code Council’s Founders Award in 2003; was honored by the association’s members at its first ICC Annual Conference in Nashville, Tenn., for his encouragement of the ICC mission and his personal commitment to the safety of the built environment; and served as the keynote speaker for the conference. In addition, he was honored two years later with the International Code Council Foundation’s Silent Defender Award in 2005. 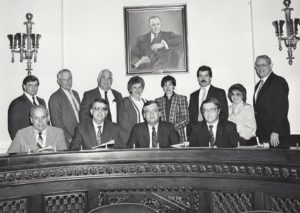 Each year, the Code Council attends the Congressional Fire Services dinner in Washington, D.C., to show its commitment toward all segments of the fire service — career and volunteer, labor and management, affinity organizations, vendors, various governmental agencies and members of Congress — for education and advocacy.

The book is available on Amazon. All proceeds generated will be donated to One World for Life, a non-profit foundation dedicated to empowering firefighters and first responders in the United States and worldwide.