Veterans can help keep us safe as civilians, too 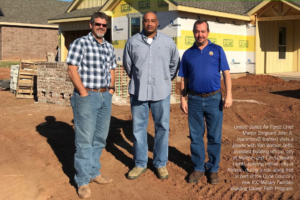 By now, most in the building industry know there is a shortage of qualified candidates due to a booming construction sector and retirements. This shortage presents an incredible career opportunity for dedicated, hardworking individuals looking for jobs.

But what if there were a group of people who already possess some of the “soft” skills—personality, discipline and drive—who not only could help fill this void, but also are looking for career changes?

Sara Yerkes and Ron Piester of the Code Council are leading a new initiative, the ICC Military Families Building Career Path Program, to help veterans who are transitioning to civilian life and their family members learn more about building safety career options.

“We need new blood,” Yerkes said. “And they need jobs. We know people in the military have the characteristics we’re looking for: discipline, integrity, character, teamwork, technical knowledge, strong work ethic and the ability to follow procedures.”

So what’s the best way to let veterans know of all these options as well as provide them the path to finding careers in building safety?

Yerkes led a discussion session at this year’s ICC Annual Conference in Columbus, Ohio, with a group of more than 40 people, including those already in the business— some of whom are veterans or spouses of active military personnel—as well as representatives of the military.

Out of that group came an advisory group that meets several times a year to discuss how to shape the program. In the works already is a webpage explaining options available to returning veterans and their families as well as a toolkit to help them each step of the way.

One veteran who attended the roundtable in Columbus already has taken the project to the next level. Liz Rider, an Air Force veteran and building official for CSG Consultants Inc., said, “Veterans are perfect for the building safety community.”

“During my career, I find that the best type of employee to hire is a veteran,” she said. “Our veterans have integrity and are able to follow directions, and end up becoming exemplary building inspectors.

Veterans are coming from jobs which they have to follow manuals, checklists and procedures, and that is the same thing we are asking them to do with the building code and inspections.”

After the Columbus roundtable, Rider ran into John A. Hammonds at an Air Force reunion in Charlotte, N.C. Hammonds, a Chief Master Sergeant, said he was about to retire as superintendent of the 317th Maintenance Group based at Dyess Air Force Base near Abilene, Texas.

“It was like he just dropped in the right place at the right time!” Rider remembered. Later, he told her his goal was to take the skills and discipline he learned in the military and transfer them to a career where he can again protect the health, safety and welfare of American citizens.

Rider contacted the Code Council to set up a ride-along with a building official in Abilene. ICC Government Relations Regional Manager Kelly Sadler, said, “Abilene city officials could not have been more cooperative in helping support the Military Families Building Career Path Program.”

“Abilene City Manager Robert Hanna and Chief Building Official Tim Littlejohn as well as other city staff were integral to organizing the ride-along opportunity and the hands-on introduction to the building industry for Chief Hammonds,” Sadler said. “Building industry support like this is not only needed, but deserved for veterans transitioning to new careers.”

Abilene city officials said they were honored to help.

“With all of the sacrifices that our veterans have made, we are more than willing to do anything we can to help our servicemen transition and encourage our profession as well,” said Littlejohn. Charles “Tobey” Dyer, Abilene’s Plumbing/ Mechanical Inspector, said, “The Military Families Building Career Path Program is a good fit for the building industry.”

“The building profession has come a long way in the last 20 years, and we need good people with skill sets like those in the military to continue to improve it,” he said.

“We need a lot more people in this industry,”he said. “It would be an honor and invaluable to the building profession to have Chief Hammonds and others like him in this industry. Enforcing building codes keeps the playing field even, and strong people like our veterans are ideal to supporting the industry.”

What did Hammonds think after his ride-along? Sadler was thrilled when he told her: “He said, ‘I’m sold, I’ll start tomorrow as a building official or inspector. I’ve been proudly protecting the safety of the United States for most of my life, so I’d be proud to keep doing it through the building industry.’”

Sadler said the folks in Texas will continue to be a resource for him. When he relocates to Tucson, Ariz., the Code Council will be there to introduce him around as well to help him accomplish his goal of becoming a code official.

“So that’s the plan,” Rider said. “Give our veterans the dignity of a new career as a building inspector, while helping ourselves out with superior candidates for the job.”

Yerkes said they hope to have the website up soon, so other veterans can find connections such as these. Meanwhile, the Code Council is working with military and veteran support organizations such as the Society of American Military Engineers to inform military service personnel and their families of opportunities available in the building safety profession.

Code Council members also were surveyed this year for suggestions about how ICC can assist military personnel who are interested in becoming building safety professionals.

Those interested in helping with the program or veterans looking for new careers can contact Yerkes at syerkes@iccsafe.org or (888) 422-7233, ext. 6247.

“We owe our veterans a lot,” she said. “We want to make this program as accessible and available as possible.”

View photos from the ride-along.