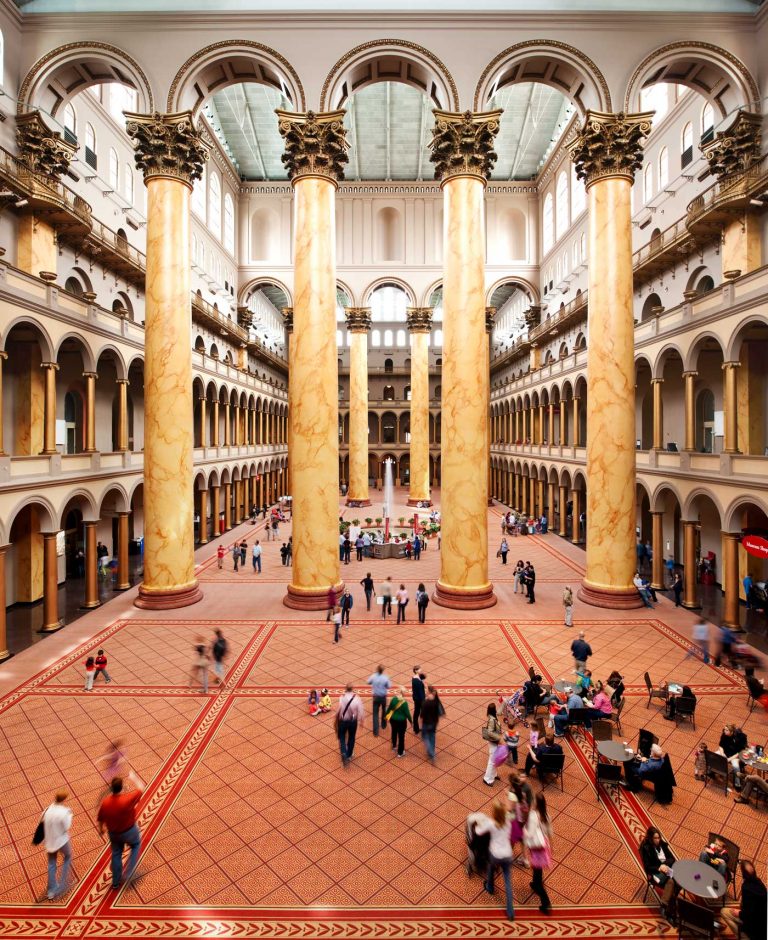 The National Building Museum is America’s leading cultural institution devoted to the history and impact of the built environment. Located just four blocks from the National Mall, the museum was created by the United States Congress in 1980, and is a private non-profit institution that tells fascinating stories of architecture, engineering and design, construction, and urban planning.

Following the completion of renovations to the historic Great Hall — that involved replacing the concrete floor with a modern foundation — the reopening marks the beginning of a year-long 40th-anniversary celebration with a full slate of exhibitions, public programs and special events.

During the renovation, museum staff took advantage of the closure to convert second-floor classrooms into exhibition space. The museum will also debut a new ticketing gallery on the ground floor. Housed in a renovated space with new lighting and electrical, acoustical treatment and durable flooring, this gallery features a display of objects from the museum’s collection, a new ticketing desk and a seating area. Later this year, an orientation exhibition will welcome visitors with an introduction to the museum’s mission and special exhibitions.

Following the reopening, the museum presents the Architecture & Design Film Festival: D.C. from March 26 to 29, 2020. This is the third annual presentation of the popular series of film screenings and discussions with filmmakers. Just in time for Women’s History Month, the 2020 festival will open with City Dreamers, a film about the contributions of Phyllis Lambert, Blanche Lemco van Ginkel, Cornelia Hahn Oberlander and Denise Scott Brown — four trailblazing women who taught, mentored and inspired thousands of professionals. Two spring exhibitions will explore issues of social justice in architecture and design.

Completed in 1887 and designed by U.S. Army Quartermaster General Montgomery C. Meigs — it was his last and most important architectural work and the one of which he was most proud — the space accommodated approximately 1,500 clerks and officers who serviced 324,968 Civil War pensioners.

Meigs was inspired by two Roman palaces. The exterior is modeled closely on the brick, monumentally-scaled Palazzo Farnese, completed to Michelangelo’s specifications in 1589. The building’s interior, with open, arcade galleries surrounding a central hall, is reminiscent of the early-16th-century Palazzo della Cancelleria. For the colossal Corinthian columns that divide the Great Hall, Meigs took his inspiration from the church of Santa Maria degli Angeli in Rome built by Michelangelo in the mid-16th-century.

Meigs chose to use bricks for their low cost and fireproof qualities, but employed expert bricklayers to achieve the building’s regular, smooth face. An ingenious system of windows, vents, and open archways allows the Great Hall to function as a reservoir for light and air. He also considered the building’s day-to-day functions: the stairs between the first three floors of the building were designed with wide treads and low risers to accommodate wounded veterans who might arrive on crutches.

The building was used for federal government offices until the 1960s when it had fallen into a state of disrepair and was considered for demolition. After pressure from conservationists, the government commissioned a report by architect Chloethiel Woodard Smith of possible other uses for the building. In her 1967 report, “The Pension Building: A Building in Search of a Client,” Smith proposed that the building be converted to a museum of the building arts.

The building has hosted several presidential inaugural balls and was designated a National Historic Landmark in 1985. It is notable for several architectural features, including the spectacular interior columns and a frieze, sculpted by Caspar Buberl, stretching around the exterior of the building and depicting Civil War soldiers in scenes somewhat reminiscent of those on Trajan’s Column as well as the Horsemen Frieze of the Parthenon.