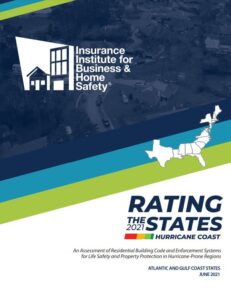 Last year was a hazardous one for homeowners, producing both the most destructive west coast fire season and the most active Atlantic hurricane season on record. Driven by warmer temperatures, hurricane season alone inflicted at least $60 billion in damages and threatened every mile of the Atlantic coast from Texas to Maine. With hurricane season beginning this month on June 1, and forecasts predicting it could be another busy one, now is the time to examine our preparedness and make improvements — and a strong building code is critical to reducing the damage and destruction caused by hurricanes each year.

Every three years following the building code update cycle of the International Code Council, scientists at the Insurance Institute for Business & Home Safety (IBHS) produce a Rating the States report assessing building codes, the administration of code provisions and related practices in the 18 Gulf Coast and Atlantic seaboard states vulnerable to hurricanes, along the “hurricane coastline” from Texas to Maine. The signature report scores the states based on a set of questions and not only compares the actual statewide building codes that are adopted, implemented and enforced but also the way individual states regulate practices related to code, such as training and licensing of both building inspectors and contractors. It also provides a roadmap each state can follow to improve residential building regulations and reduce the cycle of repeated losses resulting from hurricanes and other severe weather events.

In the recently released 2021 edition of Rating the States, Florida has again taken the top spot for strongest building code with Virginia right behind in second place and South Carolina coming in third. Florida and Virginia have vied for the top two spots in all four editions of Rating the States. South Carolina has been identified as a state to watch, with IBHS citing “significant positive code advances” between 2012 and 2015. Rounding out the top five are New Jersey and Connecticut. Meanwhile, neighboring North Carolina rates as most improved in the 2021 edition, gaining five points over its 2018 rating.

Massachusetts saw the largest decline of any state coming in three points lower than in the 2018 edition because the state removed the wind-borne debris requirements for coastal areas. Of the 18 states ranked, eight are categorized as “poor” receiving less than 70 points. Those states — including Georgia, New York, Maine, New Hampshire, Texas, Alabama, Mississippi and Delaware — lack a mandatory statewide building code. 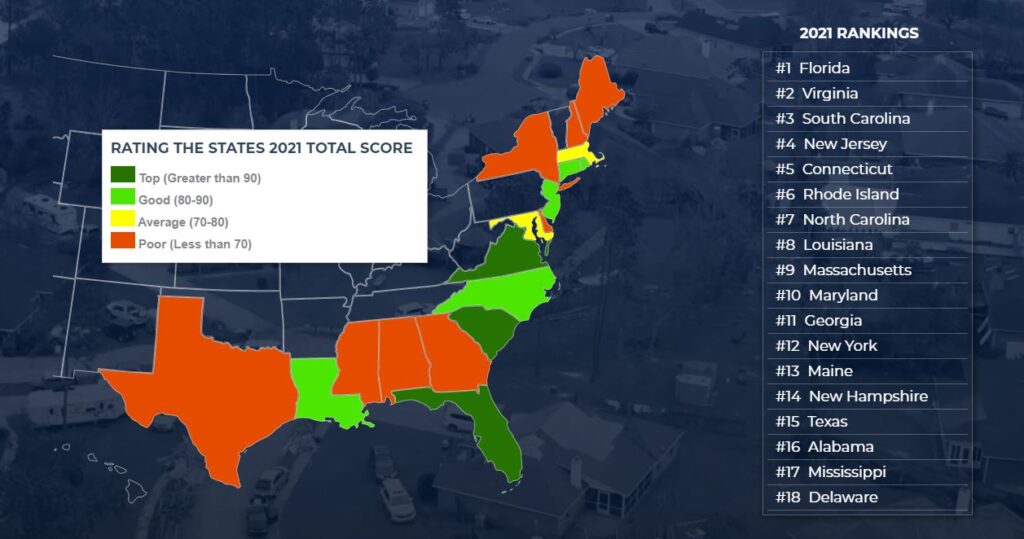 “Building science has advanced significantly over the last decade, providing cost-effective strategies to reduce the impact of Mother Nature. Modern building codes are core to addressing the known risks of high winds and heavy rain that invariably come with these systems,” said Dr. Anne Cope, chief engineer at IBHS. “Strong adopted and administered codes apply the latest science and engineering knowledge to protect homes and families from the catastrophic damage hurricanes bring and make our coastal communities more resilient for the future.”

Learning from the stark lessons of Hurricane Andrew that hit South Florida in 1992, Florida now boasts the most robust loss-prevention standards in the country and the strongest building codes among the coastal states. Hurricane Andrew revealed the deficiencies of the state’s building code compliance and enforcement processes at the time and broke all records for insurance losses. It became obvious that building codes and their administration and enforcement was a statewide issue with statewide implications. Poor compliance or enforcement in a single county could wreak havoc with homeowners, developers and commercial interests in every corner of the state.

For Florida and other regions that rank highly, the real worth and effectiveness of the codes can only be determined by putting them to the test. When Hurricane Irma hit Florida in 2017, a Mitigation Assessment Team Report by the Federal Emergency Management Agency (FEMA) noted that structural damage observations were almost exclusively limited to homes built before Florida’s statewide code took effect. It’s also completely in line with the post-disaster research by IBHS, which consistently shows homes built to more modern codes outperform older homes.

As science advances, code updates put research to work in communities. The latest edition of the International Residential Code, as well as the Florida Building Code, integrates key research from IBHS and now includes a sealed roof deck in high wind zones. The sealed roof deck provides an extra line of defense against costly water intrusion and has shown in lab testing to keep out up to 95 percent of water even when the primary roof cover is damaged.

This study uses newly available nationwide data on actual buildings and jurisdictional building code adoption. It provides a real-life quantitative understanding of the impact of adopting the International Codes (I-Codes) introduced in 2000. Buildings that adopted the I-Code standards demonstrated reduced damage, resulting in savings to building owners, insurers, the community at large and the nation. These savings represent the cumulative losses avoided from property damage associated with using the I-Codes or similar building codes during floods, hurricanes and earthquakes. FEMA projects by the year 2040, the annual savings nationwide will grow to nearly $3.2 billion. This adds up to $132 billion in total losses avoided from 2000 to 2040.

“Community resilience is something we should all care about — it is not only about protecting people and homes, it is also important to the economic health of our towns, cities and counties,” said Sara Yerkes, senior vice president of government relations at the International Code Council. “The faster a community can recover from a natural disaster, the faster life returns to normal. The 2021 IBHS Rating the States report is a great advocacy tool for state disaster mitigation plans that incorporate the adoption of current codes, strong administration of those building regulations, and the importance of licensing and training for all building industry professionals.”

Damage reduction resulting from the adoption and enforcement of strong building codes helps keep people in their homes and businesses operating following natural or manmade disasters, reduces the need for public and private disaster aid, and preserves the built environment. The IBHS Rating the States report is intended to help provide a roadmap states can follow to improve their system of residential-related building regulations by following best practices.

Local jurisdictions and homeowners whose states come up short on statewide building codes can use the FORTIFIED Home construction standard to make their homes more resilient. The standard is based on years of research at IBHS’s state-of-the-art research center and post-event damage investigations. It outlines the steps to achieve one of three progressive levels of protection starting with the roof, which is any home’s first line of defense against severe weather.

Homeowners who would like to learn more about building codes in their area can use the Federal Alliance for Safe Homes (FLASH)’s Inspect 2 Protect tool to understand building codes at the local level. The new consumer resource includes building code lookup to help determine which code the builder followed to construct a home. The site provides current code and code history for communities and offers a risk profile, disaster history, and suggested renovations, retrofits and upgrades that can make your home safer and stronger against natural disasters, including hurricanes, floods, tornadoes, earthquakes and wildfires.

Explore the full 2021 Rating the States report to see where coastal states rank and how each state can improve.