That should make LaPorte residents and their properties more secure. For Kelly Sadler, senior regional manager of International Code Council Government Relations, who headed a Code Council team of resources and local plumbing and mechanical experts, it marks the end of a long journey interrupted by floods, hurricanes, high winds and a worldwide pandemic. “It has been a tough year for all,” Sadler said. “Thanks to thoughtful industry collaboration and strategic communication technologies, we were able to provide La Porte with a knowledgeable team of building safety experts as well as excellent educational information and presentations in support of the city’s goal of protecting its citizens and its structures now and in the future.

“In the end, the La Porte City Council voted unanimously to adopt the 2018 editions of the correlated family of International Codes, including the IPC, the IMC, the IFGC and the ISPSC. The Code Council was equipped to provide the relevant data needed to assist the city in this important endeavor and we commend La Porte for its proactive steps to protect its citizens not only during uncertain but at all times,” Sadler said.

The unanimous vote to switch the plumbing and mechanical codes followed hearings before the La Porte Building Codes Appeals Board in July. The board voted three to two on July 21 to advise the city council to adopt the 2018 Code Council family of codes, including the IPC, IMC, IFGC and ISPSC. Code reviewing for the 2018 updates and preparation for the adoption of the IPC and IMC started earlier in the year. As one city council member said later, many of the beneficial reasons for switching to the IPC and the IMC had been cited during the past several code updates. In the 2020 hearings, city leaders acted.

This year, the Building Codes Appeals Board stressed the easy correlation between the IPC and IMC with the International Building Code (IBC) and the International Residential Code (IRC). In fact, the IRC contains the plumbing provisions of the IPC in its text, making it easier to use for designers, contractors and installers on housing projects. The adoption of the family of I-Codes is also consistent with Federal Emergency Management Agency guidelines and correlates with the I-Codes adopted by the Texas Facilities Commission and the Texas Department of Insurance. 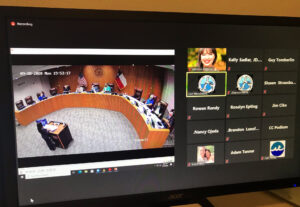 At the September 28 city council meeting, the Code Council team and some Houston region plumbing experts provided testimony to the council members. “I’ve worked in the plumbing industry 25 years going back to the Southern plumbing code, and the International Plumbing Code is the best code that I’ve ever worked with,” said Tommy Rice, Jr., president of C&B Utilities, Inc. “It offers to me and my contractors more tools and solutions to the problems that we come in contact with every day — which 90 percent of the time are caused by poorly coordinated plans using multiple different codes. If there’s anything that I can say — from a contracting standpoint working in multiple cities at the same time — is that adopting the International Plumbing Code would make the products we build better. They will be done more efficiently, they will cost your contractors less and eventually will cost your end tenants less with a more efficient and better design. I just can’t restate how good the International Plumbing Code is and I think it’s clear why everybody is moving that way.”

Merrill Crawford, owner of Charlie’s Plumbing of South Houston, has 40 years in the plumbing business and works with 63 communities within the Greater Houston Region. She said her industry has been suffering from a shortage of licensed plumbers in recent years and that training apprentices to the IPC is less expensive than to the Uniform Plumbing Code. Crawford prefers to see all of the communities in the Houston region adopt the IPC to eliminate confusion for apprentice plumbers as well as licensed plumbers and contractors who have found the IPC to be the superior plumbing code for several reasons. “It’s confusing if communities have differences in their sets of codes. A consistent IPC code among communities would help lower the cost of training,” Crawford said. “Having regulations that cost more money is hard on consumers and hard on small businesses. The adoption of the IPC will reduce a lot of those costs. I’ve talked to no less than 11 master plumbers and business owners in the Houston area and, wholeheartedly, they would like to see the IPC adopted on a widespread basis.”

Scott McDonald, building official in Denton, Texas, said his community switched its plumbing code to the IPC after careful study involving a coalition of stakeholders, contractors, installers and a city employee who is a master plumber. McDonald, who is also a board member of the National Institute of Building Sciences, described the two-week field study as rigorous and thorough. “[Our previous] plumbing code was very rigid, requires too many penetrations through the roof and a lot of technical components that are not necessarily required in the International Plumbing Code,” he said. The IPC is more performance-based and allowed for innovation with “more flexibility, less pipe and materials, lower costs of installation, and ultimately, reduced costs to our citizens.”

“The plumbers were able to complete their work in less space, less pipe — ultimately saving time on installation — thus reducing our costs to the citizens,” McDonald testified. “The plumbing community was very grateful that I was persistent in going to the IPC and had no desire to go back.”

Guy Tomberlin, vice president of Code Council PMG activities, said the comments heard by the city council were common among code officials and industry leaders who’ve had experience in the field using the IPC. He said the performance-based nature of the IPC allows designers and contractors more flexibility and alternatives in construction at a lower cost of installation. “They provide easy implementation. We have more flexibility. We’ve got more technology available, more options available,” Tomberlin said. “We have a proven track record of enhanced public safety across not only Texas but throughout the United States and beyond.”

Fourteen organizations also sent in written letters supporting the adoption of the 2018 IPC, IMC and IFGC, along with the addition of the ISPSC. They included:

Kelly Sadler said La Porte is joining the rest of Texas communities, which have found the IPC, IMC and IFGC as the best in their class. “With the I-Codes, the council members are providing their community with greater resiliency against the elements. For contractors, builders, designers, installers, inspectors and building owners, they chose safety, consistency, greater flexibility and completely correlated and updated codes,” Sadler said. “This is a major win for all concerned.”

Richard Hauffe is a senior regional manager for Government Relations of the International Code Council whose region includes Iowa, Minnesota, Nebraska, North Dakota and South Dakota, and Wyoming. He is a resident of Sioux Falls, S.D. Before starting with the Code Council in April 2011, he had been involved in non-profits, fundraising, political campaigns, polling, and research and marketing. He has a bachelor's degree in journalism from South Dakota State University and worked nine years as a reporter and photographer on a daily newspaper. He is also a former ironworker.