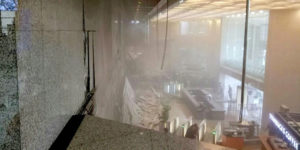 A preliminary report by the Public Works Ministry has found that loose or corroded joints may have caused the sudden collapse of a mezzanine floor at the Indonesian Stock Exchange building on Jan. 15, 2018, that sent visiting students plunging to the ground. Dramatic CCTV footage aired on television showed a floor shearing away in a matter of seconds beneath the students. Many of the students reported feeling a tremor just before the mezzanine floor collapsed into the building’s lobby.

The ministry’s report said the suspended walkway fell because several cables broke away from the ceiling due to a “concentration of weight” in one spot where nearly 100 university students visiting the exchange on a study tour from the island of Sumatra had gathered. “The burden could not be borne by the… structure and triggered a building failure,” said the report.

“It may be because of degradation of materials over time and because of earthquakes, and to prevent that we would have to develop more foolproof materials and connections,” said Davy Sukamta, head of the Indonesian Society of Civil and Structural Engineers. “If a building has a special construction like this, it must be inspected more regularly for wear and tear.”

The Public Works Ministry based its report on interviews with building management, visual observations and analysis of CCTV footage on social media, but added that its team did not have direct access to the site. “Further and closer observation is required on-site, and of construction documents,” the ministry’s press department said in a statement. “We would like to convey that this report is a preliminary report of the results of a review by ministry staff; that is, unofficial.”

Tulus Abadi, chairman of the Indonesian Consumers Foundation, called on authorities to investigate the management of the exchange building for alleged negligence. “We urge the authorities to question parties from the building management to find out whether any laws pertaining to buildings have been violated. It may indicate the party responsible has failed to properly maintain the building,” Tulus said in a written statement. “We urge the Public Works and Public Housing Ministry to conduct a thorough inspection of all public buildings in the capital, such as shopping malls, hotels and offices, to ensure they have followed proper safety standards.”

The Indonesian Stock Exchange, one of a two-tower, multi-story complex constructed in the late 1990s, is a landmark located in the heart of Jakarta’s financial district and houses dozens of other offices, including the World Bank. Jakarta Governor Anies Baswedan told reporters that the building was last inspected by authorities in May 2017. The preliminary ministry report stated that the walkway was part of the original structure and not added later.

“Building standards are an issue in Indonesia,” said ABC’s Indonesia correspondent Adam Harvey. “This is not a new building. This has been here for a long time. There have been no recent earthquakes in Jakarta that might have sparked something.”

Until the end of 2002, the Indonesian government did not have a proper national building law. While the Seismic Resistance Design Standard for Buildings (SNI 03-1726-2012) is Indonesia’s national building code and is implemented regionally, safety standards are often loosely enforced in this archipelago of thousands of islands. Last year, a fire that ripped through a fireworks factory on the outskirts of Jakarta killed around 50 people in one of the country’s worst industrial accidents. The fire was caused by sparks from welding equipment. A police investigation found multiple safety violations.

Willem Rampangilei, head of the Disaster Management Agency of Indonesia, noted that 150 million Indonesians live in danger of earthquakes, 60 million from floods, and four million at risk from tsunamis in the disaster-prone country. The number of casualties and economic loss due to earthquakes such as the 2007 Bengkulu and West Sumatra earthquakes is very high due to a to minimum reference to standards and codes.