As national attention focused on wildfires in Southern California that consumed thousands of acres of land, homes and businesses, sending some 200,000 people to find shelter, building officials in Northern California are—comparatively—quietly helping thousands of residents and businesses displaced by massive wildfires figure out the long process of remediating and rebuilding.

For weeks in October, Northern California—specifically Napa, Lake, Sonoma, Mendocino, Butte and Solano counties—was the national media focus, as some 250 separate fires fueled by 50 to 60 mph winds, single-digit humidity, and dry wood and brush reached temperatures of up to 2,000 degrees in some areas.

Fire so intense, it produced its own weather system, vortexes of smoke so thick, waterbearing planes needed to battle blazes in remote areas initially had to stay away.

Strong, but fickle winds sent sparks and flames dancing around some structures, while vaporizing homes and other buildings, reminding emergency responders and building officials of the similar capricious nature of hurricanes and tornadoes.

In all, the fires destroyed nearly 9,000 structures and leveled more than 200,000 acres. Officials say many of the 44 who died and nearly 200 injured suffered their fates during the first hours of the fires, which began late in the evening Oct. 8, 2017.

“I live about 35 miles southeast of Napa,” said Lowell Brown, past president of the International Code Council’s Napa-Solano Chapter. “At 1:30 a.m., the smoke smell was so strong, I thought my neighbor’s house was on fire. That’s how thick the smoke was.”

It was days before building officials could get into the area to help with tagging homes in various stages of damage. Brown said his office was speaking with the various NorthBay building officials about providing support as needed after the fire was extinguished.

“I had sent out a notice to all of our chapter members requesting names of individuals who would be available for deployment,” he said. “I received about two dozen responses with contact information. I forwarded the list to the Office of Emergency Services (OES) and I understand it was used to assist in getting readily available individuals out as soon as the following Monday.”

Glenn Schainblatt, building official for the city of Sebastopol, said the fires already were so strong early Oct. 9, 2017, fire officials couldn’t even set up a perimeter. The focus was on evacuation.

But the winds were so fierce, attempts by some residents trying to make a last stand before getting out were futile, and nearly fatal.

“You’d see them trying to hose down some of the sparks before they hit their houses or the landscaping around them. Those that had a 100-foot clearance around their homes generally did better. Those homes weren’t touched. We saw a lot of that.

“Some people barely got out. One resident was carrying a couple cases of cat food and her cats.”

Once Brown and his crew got to Napa, they were updated by Mike Zimmer, chief building official for Napa County. He informed them of the areas where Cal-Fire was still working, and they were given packets for red and yellow tags and the forms necessary for the Federal Emergency Management Agency (FEMA) and OES record keeping.

Zimmer said temperatures during the fire reached 1,600 to 2,000 degrees, with flames moving at 250 feet per second over an excess of brush fed by a wet summer, followed by an extremely dry fall. Emergency responders evacuated everyone they could.

The last major fire in Napa was in the 1980s, Zimmer said, and some people rebuilt then according to stronger codes.

Napa, a valley with narrow inlets and mansions on hills, has its challenges for emergency responders, especially narrow, private roads leading to mansions built in the 1920s.

Fire trucks couldn’t get up the roads, Zimmer said, and there are no hydrants up there. Yet residents have not wanted to pay the extra fees to widen and improve their roads, he said, adding county officials may opt to take over those roads.

Brown said Napa County gave them everything they needed: red and yellow tags for buildings; even boxes of one-gallon, zip-lock bags to put the tag and informational sheets into and attach to a stake at the front of the property or driveway entry.

Napa County also had respirators and goggles to use in some of the areas where smoke still was a problem, Brown said.

“It was very strange when working through whole neighborhoods and have no one else around,” he said. “It was so quiet, to observe how the fire burned up the ravines and would spread laterally to the adjoining homes where defensible space and rock walls were not installed.

“My understanding was that many of the rock walls were built by immigrants who were employed to excavate ponds in the ravines to capture the seasonal water flow in the 1800s. These rock walls saved many properties well by stopping the advancement of the flames.

“We used Google earth to identify additional structures on each site and were able to be most accurate when that system was available. Some more remote areas were without any cell service or GPS service.

“Occasionally, we would put out small hotspot fires in the brush when no first responders were available,” he said.

In general, building officials said properties where residents kept a 100-foot clearance of shrubbery and other landscaping from their homes fared better than those that didn’t. That recommendation—based on the ICC’s International Wildland-Urban Interface Code (IWUIC)—was incorporated into California’s building codes, but not until 2012.

Homes and outbuildings with wooden siding and decks often were totaled, even those structures with 18-inch-thick walls, Schainblatt said.

Those that had some sort of brick or stucco type siding did better at turning the fire away, as did homes with brick decks and patios instead of the popular treated redwood.

In some cases, the fire was so hot, fire prevention didn’t help. Schainblatt said some sprinklers not only didn’t work, they melted.

Wes Daniels, a code consultant from Santa Rosa, was among many in that community who lost their homes in what became known as the “Tubbs Fire,” the most destructive of the October 2017 wildfires.

“Upon reflection, the fire that destroyed my home is really a tale of two fires,” he said. “My fire was a wildland fire where the trees and chaparral meet the vineyards and scattered houses. As the fire progressed unchecked into dense suburban housing, it changed character. 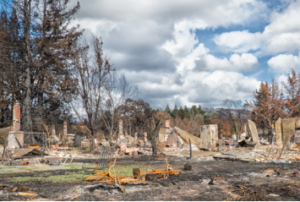 “The suburban fire affected many more people and destroyed more property. According to witnesses, the flames from the suburban fire leap-frogged from eave to eave, and wall to wall.

“Two witnesses with exceptional defensible space, and nerves of steel, stood outside without protective clothing and extinguished myriad small fires. In the suburbs where there are relatively narrow side yards, radiant heat flux probably played a serious role in the spread to every single home in subdivisions. The flames were higher and the embers were probably somewhat bigger.”

Daniels said the defensible space and stucco façade requirements in later state codes—again, taken from the Code Council’s IWUIC—helped a lot. But, in some cases, the fire just was too hot for any type of prevention. Daniels lost all of his code books in the fire, and ICC helped him replace the set.

Given the Tubbs Fire experience, Daniels recommended some changes to the state codes that would allow more time for homeowner safety and fire response.

Resiliency will be part of the rebuild, said Stephen Jensen of Bureau Veritas, which has contracts in Santa Rosa and Napa County to make sure new structures are built not only to the more recent state/IWUIC, he said, but to strict lawn-reduction rules California adopted in 2015—based in part on irrigation standards developed by the ICC—due to drought and water use concerns.

With some 3,000 structures to review and rebuild, Jensen said, it could take up to five years for all people to get back into their homes.

Zimmer said residents are working with the Environmental Protection Agency on cleaning their home sites, some of which may have asbestos residue.

One insurance underwriter said the October 2017 Northern California wildfires were the costliest—some $8 billion—in terms of covered loss in U.S. history. As such, Zimmer said, insurance companies are very interested in making sure homeowners they insure rebuild more resiliently.

Building officials say the thousands who lost their homes—everything—aren’t fighting any increased costs, either. Many still haven’t found permanent lodging.

In the first days of the fires, motels far enough away to escape damage were soon filled. And people went from relatives to friends to wherever, carrying whatever they could grab with them.

Schainblatt said they saw a lot of recreational vehicles where people retreated to after leaving their homes. Others went from friend to friend. “You can’t find a place to rent.”

“When it was safe, we saw people drive up to their homes, or where their homes were,” Brown said. “It was very emotional.”

“What people don’t prepare for when rebuilding is how we deal with the victims who have lost their homes,” said Patrick Healy, building inspector for the city of Pleasanton.

Pleasanton wasn’t affected by the wildfires, but Healy knows what they have in store for them, having dealt with rebuilding following massive fires while he was working for the county of San Diego in 2003 and 2007.

As residents and business owners in Northern California struggle to resume their lives, no one still knows how the fires started.

Regardless of how wildfires start, Zimmer said, “prevention is where it’s at.”