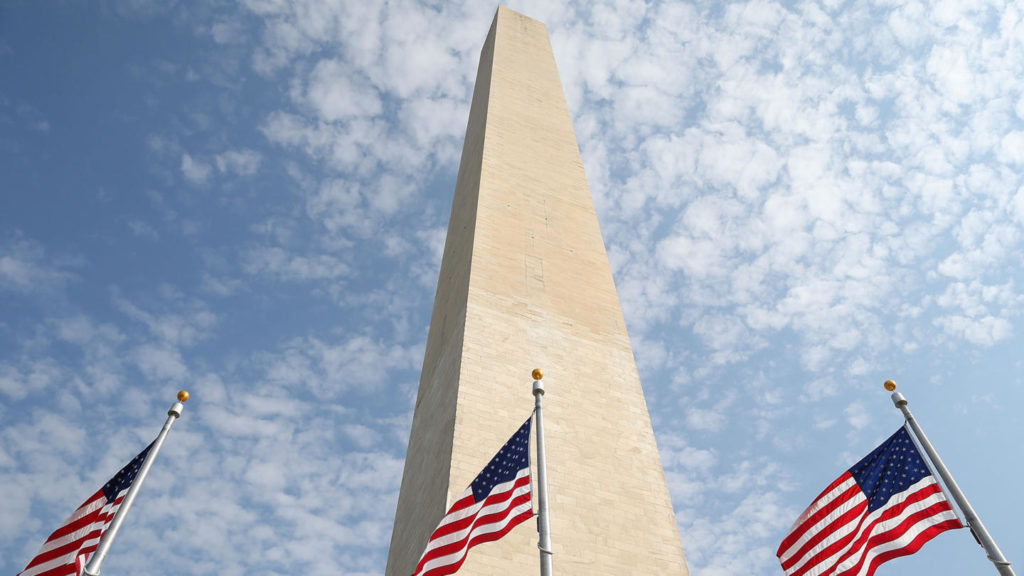 The Washington Monument, built in honor of America’s revolutionary hero and first president George Washington, was dedicated in Washington, D.C., on Feb. 21, 1885.

The 555-foot-high marble obelisk was first proposed by the U.S. Congress in 1783. When Washington asked architect Pierre L’Enfant to lay out a new federal capital on the Potomac River in 1791, L’Enfant left room for it in his designs at the western end of the sweeping National Mall (near the monument’s present location). After George Washington’s death in 1799, plans for a memorial were discussed, but none were adopted until 1832 — the centennial of Washington’s birth.

In 1832, a private Washington National Monument Society was formed. After holding a design competition and choosing an elaborate Greek temple-like design and hollow Egyptian obelisk by architect Robert Mills, the society began a fundraising drive to raise money for the statue’s construction. These efforts raised some $230,000, far short of the $1 million needed. Construction began anyway, on July 4, 1848, as representatives of the society laid the cornerstone of the monument: a 24,500-pound block of pure white marble.

Work on the project was interrupted by political quarreling in the 1850s, and six years later, with funds running low, construction was halted. Construction ceased entirely during the American Civil War. No further progress was made until 1876 — the centennial of American independence — when Congress passed legislation appropriating $200,000 for completion and President Ulysses S. Grant authorized construction to be completed. On Dec. 6, 1884, in Washington, D.C., workers placed a nine-inch aluminum pyramid atop a tower of white marble, completing the construction of the impressive monument. In February 1885, the Washington Monument was formally dedicated, and three years later it was opened to the public.

Made of some 36,000 blocks of marble and granite stacked 555 feet in the air, the monument was the tallest structure in the world at the time of its completion. In the six months following the dedication ceremony, over 10,000 people climbed the nearly 900 steps to the top of the Washington Monument. Today, an elevator makes the trip far easier, and more than 800,000 people visit the monument each year. A city law passed in 1910 restricted the height of new buildings to ensure that the monument will remain the tallest structure in Washington, D.C. — a fitting tribute to the man known as the “Father of His Country.”

Architect Robert Mills designed a first Washington Monument, located in Baltimore, Md., as well as the better-known monument to the first president in the nation’s capital, Washington, D.C.

Robert Mills (August 12, 1781 – March 3, 1855), was a South Carolina architect best known for designing the Washington Monument. One of the first American-born professional architects, he was associated with Thomas Jefferson, James Hoban and Benjamin Latrobe.

A Neoclassical architect, Mills generally followed the principle, enunciated by Jefferson, that antique classical architectural forms best befitted a reincarnation of ancient republics — i.e., the new United States. He used classical forms with originality. Mills’ more than 50 major works included colleges, prisons, hospitals, houses, canals, bridges and breakwaters. His best-known structures are the Treasury and the Old Patent Office (now part of the Smithsonian Institution) in Washington, D.C.; the wings of Independence Hall in Philadelphia; and the monuments to George Washington in Baltimore, Md., and Washington, D.C.