At 12:18 p.m. on Feb. 26, 1993, a terrorist bomb exploded in a parking garage of the World Trade Center in New York City, leaving a crater 60 feet wide, opening a 100-foot-wide hole through four sublevels of concrete and causing the collapse of several steel-reinforced concrete floors in the vicinity of the blast. The detonation velocity of the bomb was about 15,000 feet per second, or 10,000 miles per hour. 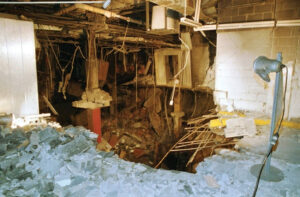 The bomb — a 1,336-pound urea nitrate-hydrogen gas enhanced explosive device — was intended to send the North Tower (Tower 1) crashing into the South Tower (Tower 2), bringing both towers down and killing tens of thousands of people. Although the terrorist bomb failed to critically damage the main structure of the skyscrapers, it did instantly cut off the World Trade Center’s main electrical power line, knocking out the emergency lighting system. Hundreds were trapped in elevators in the towers when the power was cut. Thick smoke rose to the 93rd floor of both towers — including through the stairwells (which were not pressurized) — and smoke went up the damaged elevators in both towers, making evacuation difficult for building occupants. Authorities eventually evacuated 50,000 people from the buildings, hundreds of whom suffered from smoke inhalation. In total, six people were killed, more than 1,000 were injured, and the World Trade Center itself suffered more than $500 million in damage.

The mastermind of the attack — Ramzi Ahmed Yousef — remained at large until February 1995, when he was arrested in Pakistan. On the flight back to the United States, Yousef reportedly admitted to a Secret Service agent that his only regret was that the 110-story tower did not collapse into its twin as planned — an eerie supposition that came to pass just 13 years later on Sept. 11, 2001, when two groups of al Qaeda terrorists finished the job begun by Yousef, crashing two hijacked airliners into the north and south tower of the World Trade Center. The structural steel of the skyscrapers could not withstand the tremendous heat generated by the burning jet fuel, and both collapsed within two hours of being struck. The catastrophe claimed the lives of close to 3,000 in the World Trade Center and its vicinity, including a staggering 343 firefighters and 23 policemen who were struggling to complete the evacuation and save the office workers trapped on higher floors. Only six people in the World Trade Center towers at the time of their collapse survived. Almost 10,000 other people were treated for injuries, many severe.

Completed in 1972 and 1973, the original 110-story twin towers were the fifth and sixth tallest buildings in the world (after its construction in 1972, One World Trade Center was briefly the world’s tallest building). Many innovations went into the design of the World Trade Center towers in the 1960s, including one of the earliest applications of computer stress analysis. Structural engineer Leslie Robertson considered jet impact when working on the World Trade Center and the towers were designed to withstand the impact of a 707, the largest commercial airliner that existed in the 1970s. 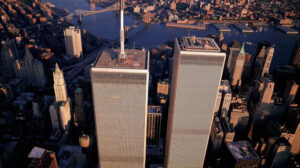 Architect Minoru Yamasaki and engineers John Skilling and Les Robertson worked closely, and the relationship between the towers’ design and structure was clear. Faced with the difficulties of building to unprecedented heights, the engineers employed an innovative structural model: a rigid “hollow tube” of closely spaced steel columns with floor trusses extending across to a central core designed to resist winds of up to 80 miles per hour. The columns, finished with a silver-colored aluminum alloy, were 18 ¾ inches wide and set only 22 inches apart, making the towers appear to have no windows. Chicago’s Aon Center (formerly the Amoco Building), completed in 1973, uses a similar support system.

Also unique to the engineering design were its core and elevator system. The twin towers were the first supertall buildings designed without any masonry. Worried that the intense air pressure created by the buildings’ high-speed elevators might buckle conventional shafts, engineers designed a solution using a drywall system fixed to the reinforced steel core. For the elevators, to serve 110 stories with a traditional configuration would have required half the area of the lower stories be used for shaft ways. Otis Elevators developed an express and local system, whereby passengers would change at “sky lobbies” on the 44th and 78th floors, halving the number of shaft ways.

The structural system, derived from the I.B.M. building in Seattle, Wash., was impressively simple. The 208-foot-wide facade was, in effect, a prefabricated steel lattice, with columns on 39-inch centers that acted as wind bracing to resist all overturning forces; the central core took only the gravity loads of the building. The very light, economical structure kept the wind bracing in the most efficient place, the outside surface of the building, and didn’t transfer the forces through the floor membrane to the core, as in most curtain-wall structures. Office spaces had no interior columns. In the upper floors there were as much as 40,000 square feet of office space per floor. The floor construction was of prefabricated trussed steel, only 33 inches in depth, that spanned the full 60 feet to the core, and also acted as a diaphragm to stiffen the outside wall against lateral buckling forces from wind-load pressures.