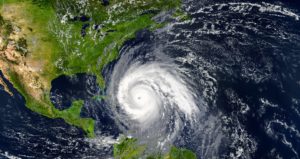 Hurricane researchers at Colorado State University (CSU) are predicting an above-average 2020 Atlantic hurricane season in their seasonal hurricane outlook. Specifically, they expect it to be 140 percent of the average, calling for 16 total named storms. Of those storms, the CSU team is forecasting eight hurricanes, four of them being major hurricanes (a Category three storm or higher with sustained wind speeds of 111 to 129 mph).

The outlook also states that the water temperatures in the Atlantic are warmer than average, which leads to greater amounts of moisture and atmospheric instability. This will also encourage tropical storm development. Hurricanes are giant heat engines that require massive amounts of warm water and moisture to form. Warmer sea surface temperatures are significant because an increase in storm intensity does not just cause a modest increase in damage, the change can be exponential. For instance, a storm with winds of 150 mph can produce 250 times the damage compared to a storm with winds of 75 mph. So, if water temperatures remain far above normal for the season it is logical to assume, a landfalling storm will likely cause more damage.

The forecast states: “As is the case with all hurricane seasons, coastal residents are reminded that it only takes one hurricane making landfall to make it an active season for them. They should prepare the same for every season, regardless of how much activity is predicted.”

It also adds “The CSU forecast is intended to provide a best estimate of activity in the Atlantic during the upcoming season — not an exact measure.”

The 2020 seasonal outlook — formally entitled “Extended Range Forecast of Atlantic Seasonal Hurricane Activity and Landfall Strike Probability for 2020” — was published on April 2, 2020. To create the forecast, the team relies on a variety of meteorological factors as well as several specialized computer models and decades of data from past hurricane seasons.

This is the 37th year that the CSU hurricane research team has published the outlook. In 2019, the CSU researchers called for the season to be 120 percent of the average in a season that led to Hurricane Dorian, which devastated the Bahamas and significantly impacted much of the U.S.