Roundtable attendee Joseph Montoya, chief building official for the town of Castle Rock (Colo.), and panelist Curtis Dady, technical manager of the Business Development Group at Viega LLC, shared their insights regarding the issues raised during the forum.

As a code geek and a plumber who also serves as chief building official for a small jurisdiction, I appreciate the effort behind, and the valuable discussion that took place at, the April 27 roundtable meeting and I would like to take the opportunity to provide my feedback.

I agree with a majority of the discussion in regards to the topic. Almost everyone on all three panels had a theme in their collective responses to the questions asked of the panel. The codes and standards already provide the guidance, and in many instances the specific (prescriptive) ways to construct a compliant piping system. However, no one (homeowners, non-experienced trades) that would benefit from them reads them. Quite simply, you cannot “can” the expertise and knowledge of an experienced craftsman or tradesperson and pass that on to a novice or a weekend DIY person who went to a big box home improvement store. The science of pneumatics is not learned in a day or weekend.

I think the report that drove the PMG roundtable is very telling in itself. It shows (in my opinion) that the catastrophic failure in piping systems comes down to three things: poor installation (first and foremost); poor maintenance by the owner or owner’s representative; and lack of skill in the repair and maintenance of piping systems.

Looking at these three things, the first one is the biggest issue. I think the panels collectively agreed that the standard and code provide exactly what we expect them to provide: faith in the product made to a standard; and faith that the product will perform to the standard when installed correctly. However, when installed incorrectly (52 percent of the time plus or minus) the systems fail. 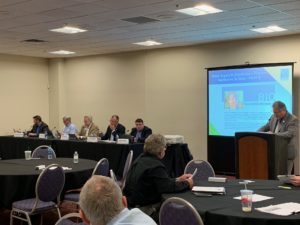 The second one is just as big as the first one. Most plumbers and code geeks know that the code requires you not put anything into a piping system that will be detrimental to the piping system. However, as highlighted in the roundtable discussion, most homeowners do not have that knowledge. Also highlighted was quality of water; however, we cannot control that. I have always said that even installed incorrectly a piping system will typically still work. Having said that however, the piping system will ultimately fail because the pipe and the fittings were not installed or maintained to the product standard. There was also discussion of the required inspections. I will not go down that rabbit hole; however, I cannot resist a small comment in that regard. If piping systems were always inspected by people who have knowledge of piping systems and the standards involved, including the science of pneumatics (plumbers), then failure of said systems may very well be less than what was presented in the report.

The third one is probably the most telling. When a system is repaired incorrectly, it is the same as number one (poor installation) combined with poor maintenance and these piping systems fail faster.

I find it interesting that the insurance companies look at codes and standards first as potentially being the fix. The codes and standards do not need to be fixed because they perform exactly when applied correctly. However, how many jobs are done without the knowledge of the local jurisdiction because a permit was not obtained and inspections were not performed? I am well versed in the International Plumbing Code and I can tell you definitively the authority and regulation is there as well as the prescriptive guidance when read.

I think you can look at the discussions and come away with a better question. How can we educate the homeowners to understand what is already there? It will take a partnership between the insurance industry, code professionals and the Code Council. The medium used today are the many websites sought out by users searching for information. If someone were to use a search engine to find out how to install something, how cool would it be if the first search were a video put out by the collective on proper installation of the product to the standard? The information already there needs to be readily available to the masses in a usable format. The reality? It is already out there by DYI websites and videos, and it is 50–50 on whether it is correct or not. However, if a video produced by the industries and the collective were to be endorsed by the industry it would be more credible than what is out there now.

On April 27, the International Code Council PMG resource team hosted a forum for the purpose of exploring solutions related to mitigating water leaks in premise plumbing systems. I was honored to participate on one of the three panels for this discussion. The topics were well thought out and forwarded to us in advance for preparation. Subsequent to the meeting, all feedback I heard was enthusiastic to the point that each of us knew our time had been well spent for the purpose of making a positive impact for our industry. Kudos to Dominic Sims, Neil Burning, Lee Clifton, Shawn Strausbaugh, Jim Cika and others for endorsing, selecting and organizing another great event.

Beyond that, I would like to add that the Code Council has made a significant impact on my desire to be involved with model code development. In 2012, Viega asked me to attend my first code hearing (the ICC Code Development Hearings held from April 29 – May 8, 2012, in Dallas, Texas). After several days of watching, Viega asked if I would be interested in becoming involved with code development. I agreed and started the process of learning how to make code proposals, review proposals, understand meeting proceedings, etc. I found this could be tedious, but interesting. It was a whole new world for me.

I especially remember attending a pre-conference assembly in San Diego where leaders such as Guy Tomberlin addressed those in attendance. They conveyed a sense of purpose that was energizing and that infected me with the vision that I had become involved with something that was both important, and making a difference.

Click here to view photos from the PMG roundtable.