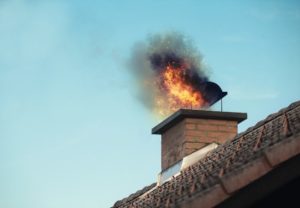 With spring beginning on March 20, the season for using chimneys and wood-burning stoves is almost over, but fire fighters say it’s always good to check your chimney. Chimney fires often occur in the late fall or early winter during the first cold spell of the season. They often involve fireplaces that haven’t been used for months.

Chimneys become blocked due to the buildup of creosote — a flammable, tar-like liquid produced from wood — and are a major cause of fires. In fact, there is an average of more than 22,000 known chimney fires annually in the United States; and chimney fires account for 75 percent of home heating fires.

Many chimney fires that don’t spread to the home go undetected, damaging the chimney and leading to expensive repairs and creating blockages that can lead to a house fire. It’s estimated that 80 to 90 percent of the chimneys inspected are not up to code due to minor or major violations. The Chimney Safety Institute of America recommends homeowners have their chimneys checked by a certified chimney sweeper annually. A typical cleaning costs about $200 and takes about an hour.

Temperatures in a chimney should never exceed 700 degrees and the installation of a chimney cap over the chimney is recommended to protect the flue. Homeowners should not attempt to unclog a chimney blockage by putting more wood in a fireplace, which can start a fire or damage the chimney.

Chimney fires can burn explosively — noisy and dramatic enough to be detected by neighbors or people passing by with loud cracking and popping noises and an intense, hot smell. Flames or dense smoke may shoot from the top of the chimney. Homeowners report being startled by a low rumbling sound that reminds them of a freight train or a low flying airplane.

Below are 10 tips to prevent chimney fires: