Today in history: The Chi Chi Earthquake of Taiwan 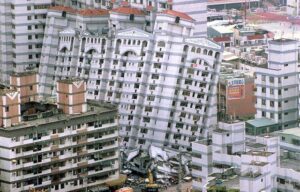 On the morning of September 21, 1999, the island nation of Taiwan was shaken awake by a 7.6-magnitude earthquake in Jiji (Chi-Chi), Nantou County, which killed 2,415 people, injured 11,305, caused NT$300 billion worth of damage and left an estimated 100,000 people homeless. It was the second-deadliest quake in recorded history to hit Taiwan since the 1935 Shinchiku-Taichu earthquake that killed 3,200 people. Known as the Chi-Chi earthquake (or also as the Jiji Earthquake and the Great 9/21 Earthquake), the catastrophic tremor was centered in central Taiwan along the west coast near Nantou and Taichung, but serious damage was found throughout the island. Roads buckled and landslides diverted rivers, causing the impromptu formation of lakes. To make things even worse, there were five aftershocks measuring at least 6.0 in magnitude in the 30 minutes following the major quake.

Buildings all over the island proved to be vulnerable. A 12-story hotel in Taipei was completely destroyed. A 14-story building in Dongshi was toppled. The quake exposed the fact that much shoddy construction had occurred during Taiwan’s construction boom in the 1990s. The worst-hit area was Tungshih, where virtually every building was damaged and the population of 60,000 was left without electricity, water or telephone service.

There was evidence of serious damage throughout the country. A new waterfall sprang up instantly on a river near a collapsed bridge, several Buddhist temples gave way and, in the capital city of Taipei, there were many fires. Because the quake had caused a vertical displacement of land of up to 26 feet in some places, new small hills were formed suddenly across the countryside. 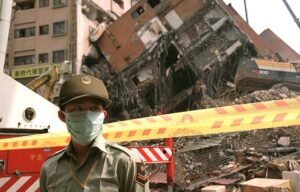 Rescue groups from around the world joined local relief workers and the Taiwanese military in digging out survivors, clearing rubble, restoring essential services and distributing food and other aid to the more than 100,000 people made homeless by the quake. With thousands dead, there was not enough freezer capacity in the country’s morgues to hold all the bodies. Tent cities popped up in fields and parks because many people were afraid of being in buildings while aftershocks continued. There were more than 8,000 aftershocks in the months following the quake. The disaster, dubbed the “Quake of the Century” by the local media, had a profound effect on the economy of the island and the consciousness of the people. The quake is often referred to simply as 9-21 after the date it occurred.

The government’s response to the disaster was less than satisfactory to the people. Nations from around the world offered and provided assistance. The immediate rescue efforts were still ongoing when public anger began to mount at shoddy construction that many felt was responsible for the high number of casualties. Legal building codes, enforcement of those codes, and the construction companies themselves all came in for criticism. Constructors and architects of modern buildings that collapsed were detained by the authorities, their assets frozen and travel documents seized.

One of the issues highlighted after the quake was “soft stories”: high, open ground floors in high-rise buildings with little structural support. This led to the ground floor collapsing first in a quake, either toppling the other floors or starting a pancake collapse. Buildings in Taiwan over 160 feet tall require a peer review process; no building that had undergone this process collapsed, contrasting with a number of dramatic failures of buildings just under 160 feet in height. Subsequent construction in Taiwan has been more closely monitored to ensure that future earthquakes will not cause such large-scale destruction and loss of life.