The increased frequency of natural disasters — and the monetary damage that is caused — is setting records in the United States. As of July 8, 2020, the National Oceanic and Atmospheric Administration (NOAA) reported in its Billion-Dollar Weather and Climate Disasters: Overview that the U.S. has already experienced 10 weather disasters this year that exceed $1 billion in damages. This makes 2020 the sixth year in a row with at least 10 weather events so extreme. Overall, these severe weather events resulted in the deaths of 80 people and had significant economic effects on the areas impacted.

The NOAA report takes into account damage from tropical cyclones, floods, droughts, heat waves, severe local storms, wildfires, crop freeze events and winter storms. The first billion-dollar weather event of 2020 was an outbreak of tornadoes in the South, and Northeast flooding and storms that struck on Jan. 10-12. February and March were fairly quiet with severe weather hitting the South, East and Northeast on Feb. 5-7, and the Midwest and Ohio Valley on March 27-28. The month of April picked up pace with three severe weather events — including hail storms and a tornado outbreak — in the North Central and Ohio Valley, and the South, Southeast and Eastern U.S. May saw even more extreme weather, including tornadoes in Tennessee and related weather in the Southeast on May 2-4, outbreaks in the Central and Eastern U.S. on May 3-5, and severe weather in the South, Central and Eastern U.S. on May 20-23. The most recent were hail storms in South Texas on May 27. The data does not yet include information from July. 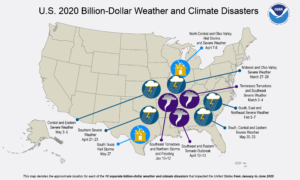 According to NOAA climatologists, the U.S. may continue to see more severe weather than ever before during the remainder of this year, including a widely predicted hyperactive hurricane season in the Atlantic Ocean and the Gulf Ocean states, and the looming wildfire season out West.

New building codes and designs have been able to minimize damage through the use of stilts on beach homes, metal roofs that limit snow and hail damage, and features that prevent a roof from being easily lifted off during a hurricane or tornado, but buildings that are not up to the new codes and standards are still susceptible to the dangers of severe weather. Unfortunately, there remains a high percentage of homes that are not built with any measures to limit damage from flooding or wind storms and the results can be catastrophic.

As natural disasters increase in frequency and severity, strategies for pre-disaster mitigation will save lives, reduce economic costs and support more rapid recovery after a major disaster. Multiple studies have confirmed that adopting and effectively implementing current model building codes is one of the nation’s best defenses against hurricanes, tornadoes, earthquakes, flooding, fire and other natural disasters. A Federal Emergency Management Agency analysis from 2014 estimated approximately $500 million in annualized losses avoided in eight southeastern states due to the adoption of modern building codes.

With respect to natural hazard events alone, a National Institute of Building Sciences study demonstrated that for every $1 invested in mitigation from a specific set of hazard mitigation grants, the nation receives $6 in benefits as avoided future losses — a benefit-to-cost ratio of 6 to 1.

Resilience in the built environment starts with strong, regularly adopted, and properly administered building codes. Study after study confirms that adopting and effectively implementing current model building codes is the nation’s best defense against hurricanes, tornadoes, earthquakes, flooding, and other natural disasters. Strong building codes save lives and protect people’s homes. They ensure that businesses stay open by minimizing interruptions and damage to property, and they help keep emergency responders safe. They are locally tailored — both through hazard mitigation provisions that tie to a given jurisdiction’s location and land features as well as through the ability of an adopting jurisdiction to amend model codes to reflect local considerations. They are regularly updated to reflect the latest in building science, hazard maps and best practices. Communities cannot be resilient without resilient buildings.