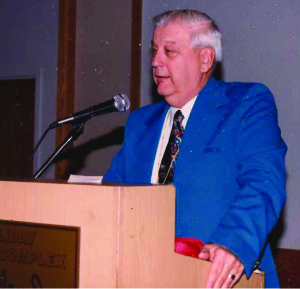 “Early in his term as CEO, he took a second mortgage on his home to keep cash flow going,” said former BOCA board member Paul Myers. “He put it all on the line for BOCA.”

Bechtel passed away at age 91 on July 27, 2019. When he retired as chief executive officer in 1993, he left the Country Club Hills building named in his honor to pursue travel with his wife Dorothy, golf and other relaxations.

The name on the building — now the Code Council’s Central Regional Office — is about the only thing Myers still recognizes when he visits. But he and others who knew “Beck” said everyone in the building safety industry should remember who Clarence Bechtel was and how he took the organization founded in 1915 and presided over its period of most phenomenal growth.

Originally from Chaska, Minn., just outside the Twin Cities, Bechtel started out as a plumber, and even at retirement from BOCA, still held a master plumber’s license. Bechtel served four years in the United States Marines Corps and remained in the reserves for years. He carried that Marine can-do attitude throughout his life. “Oh yes. Once a Marine, always a Marine,” his widow Dorothy said chuckling.

But there was one time when Bechtel brought a tear to her eye, as he suffered from dementia in his final years. “We were watching a Veterans Day ceremony at our home from Washington, D.C. They played all the hymns from the different branches of service. When they got to the Marines, he stood up slowly, saluted and started singing along.”

Dorothy and Bechtel stayed in the Twin Cities area after they were married in 1950, ultimately raising four children together. He worked as a plumbing inspector in Minneapolis, as well as a plumbing instructor at the Dunwoody Industrial Institute. After Bechtel became supervisor of housing inspection in Minneapolis, officials in Paterson, N.J., came calling, Dorothy recalled. So they moved to Paterson, where he became coordinator of community improvements. 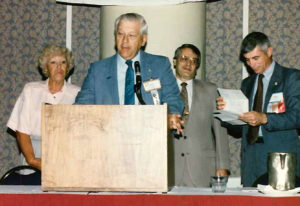 But then BOCA noticed him as well, offering Bechtel a position, which meant a move to the Chicago area. Sue Bechtel, their youngest, said she loved New Jersey and didn’t want to move. So much so, she’s back there now, as is her mother after her father’s passing. Being the youngest, Bechtel and Dorothy had to bring her along to conferences and other meetings since her siblings were grown and out of the house. “I went to a lot of conferences,” Sue Bechtel said, “but I met a lot of nice people!”

At that time, BOCA was on the University of Chicago campus on the city’s South Side. The family moved to Beecher, then and now a small town south of Chicago. Bechtel picked that spot because it had a Missouri Synod church, Dorothy said.

Beck quickly moved up the ranks at BOCA, starting as director of Membership Services in late 1972, then on to managing director and associate director for Governmental Affairs before being named executive director in 1978.

Sue also mentions her father putting a second mortgage on their home to help save BOCA after he took the helm. “How many people would do that?” she said. “That shows you how much he cared.”

In a 1993 BOCA story on his retirement, Dorothy put his feelings for BOCA in perspective: “Beck just plain loves BOCA. I’d call it a marriage. It’s been his life for 20 years. He’d change office light bulbs or make sure the windows had been cleaned with the same enthusiasm he had for an annual conference or a board of directors meeting.”

The same article mentions Bechtel maintained a grueling travel schedule, spending virtually seven or eight months of each year on the road promoting BOCA, nurturing relationships with chapters and individual members. “He is the most naturally talented public relations person I’ve ever met,” a BOCA staffer said at the time. 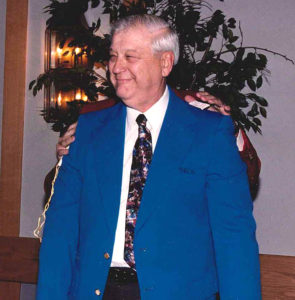 Gregarious is how many of those who knew Bechtel describe his personality. Down to earth also comes up often, as well as approachable and receptive. Myers remembered when he was a young man from Cincinnati, who worked his way up from local BOCA leadership to the board in the early 1990s. “The first time I met him was at an annual BOCA conference,” Myers said. “Here he was, the ‘Big Dog’ and I was wet behind the ears. But he told me, ‘People elected you to be here. You’re going to do great.’ He could put you at ease in a heartbeat.”

Myers said Bechtel also made it a rule for the board to spend part of an annual conference at a golf outing. “It built a sense of camaraderie,” Myers said. “And he was a good golfer!”

Myers said Bechtel also was able to get along with leaders of the other legacy groups, despite the natural competition. And he was a big proponent of working with the World Organization of Building Officials, which was formed in 1984 to share knowledge of safe construction throughout the globe.

In 1988, the BOCA Board of Directors formally changed Bechtel’s title to that of chief executive officer. While Bechtel had a more administrative and outreach role, Paul Heilstedt, his eventual successor as chief executive officer, handled the technical side. “I first met Beck when he became executive director of BOCA,” Heilstedt recalled. “From the very beginning, Beck made our efforts clear that BOCA is a service provider to the members of the organization. All of BOCA services were to advise, assist and train those members. Beck’s refocusing of the organization’s direction was a key to the growth and well-being of the organization for the subsequent four decades.”

“Beck was charismatic, generous and devoted to his friends and family,” Heilstedt continued. There is a good reason why the Code Council Central Regional Office is named the C.R. Bechtel Building.”

Bruce Larcomb, former Ohio regional office manager for BOCA, remembered how he and Bechtel got to be fast friends out of the gate. Bechtel asked him to be regional manager based on conversations with other Ohio code officials. “So basically, I was hired that day,” Larcomb said. “Two weeks into my tenure, Beck calls the new office at about 10 a.m. Now remember, Beck didn’t really know me yet. He asked how it was going. I replied ‘Oh, I just got to work, so I’m not sure. I plan on taking lunch between 11 a.m. and 1 p.m. I’ll take a nap between 3 and 4, and that should end my day.’ Needless to say it got very quiet on Beck’s end. Finally, he asked, ‘You are kidding, right?’ That was the beginning of a terrific relationship, both professionally and personally. I’ll miss him.”

Former Code Council Board President Henry Green recalls how welcoming Bechtel and Dorothy were to him and his wife Angela when they attended Green’s first code conference. “They did not know us but gave us a sense of comfort in a vast new world in which we entered,” Green said. “Throughout our relationship, they showed great friendship and thoughtful direction in the BOCA family.

“I am thankful for the time with Beck,” Green continued, “as he is one that I count in helping me achieve the many stages of growth along my career.” According to Green, that was pretty typical of Bechtel. “I remember my early days in code administration, how he mentored upcoming professionals who aspired to become leaders in code administration and in BOCA. He set a standard for leadership that is still evident today among leaders in our profession.”

Kathleen Mihelich started with BOCA in the late 1980s to coordinate training, education and certification. She was impressed at how approachable Bechtel was, noting he would do what he could to make sure staff and membership felt appreciated. “He was really good at planning annual meetings,” she said. “He wanted to make things special for the members.” 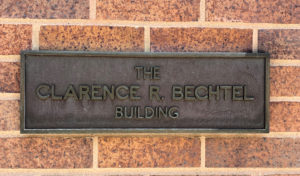 Leppellere said Beck approached him a few years before he retired to tell him he would be planning annual meetings, a tall order to be sure considering Bechtel’s attention to detail and fondness for the members. “He had a way with the members,” Leppellere said. “He was one of them. He made sure to address their needs. But he had a group of friends from the BOCA board all over the country. The board was a close, close family. I was invited to go fishing with them one time, and it didn’t really matter what the environment was. Beck was Beck.”

Michael Perrone, a past BOCA board president, said even after he retired, Bechtel’s presence was strong throughout the organization. “He commanded a certain respect, but he didn’t ask for it,” Perrone said. “He made you feel like you were part of something special.”

“Thanks to individuals like Clarence Bechtel, the International Code Council stands as a valued association for construction professionals and organizations throughout the building safety industry,” explained Code Council Chief Executive Officer Dominic Sims. “While we mourn the loss of one of our founding visionaries, we also celebrate his accomplishments that continue to benefit our association and the members and jurisdictions we serve. His legacy will remain strong among those who remember him.”