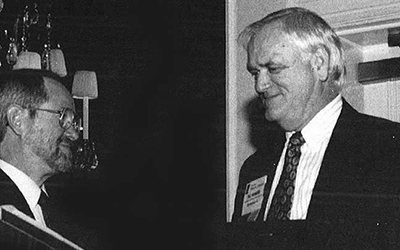 Manning also served as President of SBCCI’s Public Safety Testing and Evaluation Services, Inc. (PST & ESI) during his 25-year career with the legacy organization. He was a former chairman of the National Hurricane Conference and a longtime member of the American Society for Heating, Refrigerating and Air Conditioned Engineers (ASHRAE).

“When Billy became ASHRAE president, the title of his inaugural address was ‘Building on the Shoulders of Giants,'” explained Code Council CEO Dominic Sims. “Today, ICC stands on the shoulders of giants such as Billy, whose contributions have had an enduring effect on our association and public safety in the built environment. He was a good engineer and an even better person.”

“Thanks to individuals like Billy Manning, evaluation services has evolved into a core function of ICC and is a valued service for professionals, manufacturers and organizations throughout the building safety industry,” added Code Council Board of Directors President Stephen D. Jones. “While we mourn the loss of one of our giants, we also celebrate his accomplishments that continue to benefit our association and the Members and jurisdictions we serve.”

After graduating from Virginia Tech University in 1956, Manning served in the U.S. Army for two years, attaining the rank of First Lieutenant in the Corp of Engineers. Following his military service, Manning continued to serve his country through his work for the Defense Civil Preparedness Agency as part of the U.S. Department of Defense, where he received a Distinguished Service Citation.

Prior to joining SBCCI in 1975, Manning worked as Director of Building and Zoning for Hillsborough County, Fla., where he also served on the Board of Directors of the Central Southwest Coast Chapter. Before joining Hillsborough County, he was Director of the Professional Advisory Service Center for Auburn University’s Engineering Extension Service, where he organized and conducted workshops on hazard resistant construction for building officials, architects, engineers and local, state and federal government officials.

Former NES CEO David Conover said he first met Manning in 1977 at an SBCCI Mid-Year Hearing and developed a personal and professional relationship that lasted over the years. “I had no hesitancy calling the Birmingham office and asking to speak to my ‘Grandpa,'” Conover said. “He was very personable and was not adverse to pitching in and helping people.

“He certainly wasn’t bashful about giving you his opinion, either, but you listened because he was always very professional and very courteous,” Conover continued. “When I look at the five fingers on my hand representing the mentors in my career, Billy is certainly one of them.”

Manning received multiple honors from organizations in the states of Alabama, Georgia, Kentucky, Tennessee and Texas for his work in engineering and code development. At the 1992 National Hurricane Conference, he was the recipient of the Neil Frank Award, which recognizes individual achievement in improving coastal construction building standards and code compliance.

Gary Nichols, current Vice President of Engineering and AC Development for the ICC Evaluation Service (ICC-ES), said Manning was instrumental in hiring him as an engineer at SBCCI in 1983. While working together on projects such as the development of SBCCI’s Deemed-to-Comply Standard for Single and Multifamily Dwellings in High Wind Regions and during the aftermath of Hurricane Hugo in 1989, Nichols said Manning’s commitment to excellence was apparent. “He was a take charge kind of guy,” he said. “If he didn’t like what you had done, he would let you know about it, and in a lot of ways I always appreciated that.”

“Mr. Manning ran a tight ship and expected people in the departments he supervised to do their best and present themselves properly,” added former PST & ESI employee Rosalind Fazel, who now works with ICC-ES in Birmingham. “And he wanted the end product, from all of the departments, to be the best we could put out. He said our products represented us and we should do our best to put out the very best to bring credit to our organization.”

With his steadfast approach, Manning also is remembered as a loyal and caring manager to his staff. “He was very focused on his work and expected the same from his staff, but he did have a soft side,” said his former administrative assistant Joanna Roberts, who now works as a Member Services Representative for ICC. “He remembered birthdays. If I asked for advice, he would give it. If I had a problem, he helped me find a solution. If I wanted to vent, he would let me. If I just wanted to talk, he would listen.”

“As a veteran himself, he was very supportive of the employees who were in the Reserves or National Guard,” added Fazel, who served in the Navy Reserve. “It made our service easier, knowing our employer was behind us in our endeavors.”

“He mellowed a little bit as he got closer to retirement,” Nichols chuckled.

An ASHRAE Fellow, Manning was a recipient of the organization’s Distinguished Service Award that recognizes members for their time and talent on behalf of the society. He was a past chairman of the ASHRAE Standards Committee, a member of the ASHRAE Board of Directors, and served as ASHRAE president from 1994-95, which included the society’s centennial celebration in the second year of his presidency. “Billy was especially proud of his service to ASHRAE and displayed a copy of his picture on the cover of ASHRAE Journal on his office wall,” Sims said. “He advocated constantly for improving relationships between our organizations to benefit building safety.”

Conover said Manning contacted him in 1997 and asked if he would be interested in working with NES. “Billy started getting contract work from the (Washington) D.C. crowd,” he said. “All of a sudden NES had some fairly significant work that the legacy groups and CABO did not. Because NES was an umbrella subsidiary, it made life easier for government departments such as Housing and Urban Development to give us work and not show favoritism to one of the code organizations.”

Former BOCA Evaluation Services Executive Director Tom Frost said Manning’s impact on NES was enormous. “While very sociable, when it came to the success of the NES, Billy was a serious guy,” Frost said. “The success that the NES enjoyed was due to his focus and commitment to excellence. I value the time we spent together.”

Added Conover: “The NES stock that went into the ICC in 2003 was a lot stronger than it would have been because of Billy Manning.”

“While saying ‘thank you’ is appropriate, it does not underscore the importance of individuals such as Mr. Manning and the impact they had on the evaluation service industry,” continued ICC-ES President Shahin Moinian. “Today, standing on the foundation they built, ICC-ES has evolved into the United States’ leading evaluation service for innovative building materials, components and systems.”

Over the course of his career, Manning traveled extensively across the U.S. and around the world advising building officials on how to construct safer buildings and homes through his work with SBCCI, ASHRAE, and as part of the People-to-People program. Following his retirement in 2000, Manning and his wife Shirley relocated to Hayesville, N.C. “When he traveled abroad, he would bring back souvenirs for the staff,” Roberts said. “When they moved to North Carolina, Mrs. Manning gave me a cutting from her gardenia bush. Today, my little cutting stands six feet tall, and every time I pick one of the flowers I think about them.”

In addition to his wife Shirley, Manning also is survived by a son and daughter-in-law, Michael and Lynne Manning of Murphy, N.C.