Ed Lisinski is drawing other young leaders into the codes 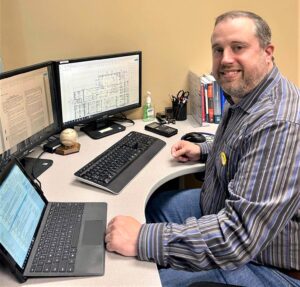 Ed Lisinski can’t remember a time when he wasn’t involved in building in some way. “My Dad had a construction company, so from an early age, I can remember being on job sites,” said Lisinski, director of Building Inspection and Neighborhood Services for the city of West Allis, Wis., a suburb of Milwaukee, where he was raised. “I think there’s a picture of me hanging drywall when I was pretty young.”

Still, Lisinski’s father had some life-changing advice for him. “He would always tell me not to go into construction. Save my knees. Save my back. Use my brain.”

Lisinski used his brain, confidence and fascination with building codes to achieve not only leading West Allis’ Building Inspection and Neighborhood Services Department into the 21st century, but drawing in current and potential colleagues with a zeal to help spread the word about building safety.

He currently serves on the Governing Committee for the Building Membership Council as vice chairman, the IBC Structural Committee as chairman, and as chairman on the Continuity and Outreach ICC subcommittee. Perhaps most significant though is his close work with the International Code Council’s Emerging Leaders Membership Council. The building safety community is sorely in need of young people to help replace inspectors and safety officials who have retired or soon will be.

Lisinski can tell prospective new code officials and inspectors how he achieved all he did by age 43, starting pretty much right after graduating with a bachelor’s degree in architectural engineering from the Milwaukee School of Engineering. While starting out in the design field in West Allis, Lisinski was shocked when city officials asked him to sit on its Plan Commission. “I was the only one under 60,” Lisinski remembered. “But they wanted me for new ideas. Until then, plans for the city had been the ‘same old, same old,’ and they wanted someone who would accept some fresh ideas, like building with more brick and glass. And bike racks. They wanted bike racks. Each plan I would ask, ‘Where are we putting the bike racks this time?’”

In between approving bike racks, Lisinski’s day jobs included drafting building plans as an architectural designer with Anderson Ashton, Inc., and teaching drafting and computer-aided design at the ITT Technical Institute, Greenfield Campus. After a few years, he heard about an opening with West Allis as a plan reviewer, so he threw his hat in. “The director at the time didn’t think I had the experience and I came across as arrogant,” Lisinski said. “I guess I was cocky at that time, but to me, it was confidence. I had a lifetime of background in construction and learned a lot as a member of the city’s Plan Commission.

“Earlier in the day of my second interview, I had taken my Commercial Building Inspector exam. The director interviewing me wasn’t too impressed, knowing it was difficult to pass. But I did. And when two other guys turned down the job, they were stuck with me.”

About that time, a couple of Lisinski’s colleagues from nearby towns urged him to get involved with code hearings. “I attended a few in person and through streaming, and I fell in love,” he said. “I learned so much about the codes through those hearings. That was my best education.”

The code hearings fueled his desire to get more involved. Ultimately, Lisinski became involved with the Building Membership Council subcommittees and task groups, and then spent time volunteering with a portion of conference calls throughout the year. From there, Lisinski became a part of the structural committee for the code change proposals. And it didn’t take long for his involvement to snowball. Soon after, he went on to the Building Membership Council Governing Committee and took on additional roles on the structural committee.

When he took over as president of the Wisconsin Code Officials Alliance, Lisinski encouraged participation from all building sectors throughout the state; not just around Milwaukee. “We are all sharing ideas because of the building inspection side, or rather the building official side, where you have similar efforts between the different quadrants of the state,” he said. “The idea was to just get everyone together and create one big organization.”

By the time Tim Schmitz, lead senior regional manager for government relations with the Code Council, met him in 2015, he could see that “Big Ed” had his act together. “It was great to see someone so young with so much drive,” said Schmitz. “Even today, Ed still has his foot on the pedal. He’s very knowledgeable and very willing to share his experience with others.”

Lisinski said he’ll get calls from colleagues in other towns asking how to approach a certain plan. And smaller contractors will call him for advice on code interpretations. “We’re all together in the same business, to keep people safe,” he said. “I love helping others.”

With his involvement in the Emerging Leaders Membership Council, Lisinski said he’s been able to help bring younger code officials into the fold, just as he was. “Emerging Leaders are truly out there; they contribute a tremendous amount and have a lot to say. They have new perspectives on everything, and it’s been great working with them.”

Even as director of Building Inspection and Neighborhood Services for West Allis, Lisinski still makes time for hiking, hunting and community involvement, including the city of West Allis Historical Conservation Commission, the Crime Stoppers Board of Directors, West Allis Historical Society, Little League and the West Allis Old Timers Baseball Association. On top of that, Lisinski also started a side company with a friend two years ago, doing third-party plan reviews for other local municipalities and code consulting on nights and weekends.

“Basically, as the director of the department in West Allis, I found myself getting away from the codes, and that was killing me. I really missed diving into a code book and reading the beauty of it. I love how the chapters build on each other and are related. So, this gives me the opportunity to stay current on codes, and stay sharp every night.”

With that, Lisinski knows he has the best of all worlds. “I’m doing my dream job in the town where I grew up.”