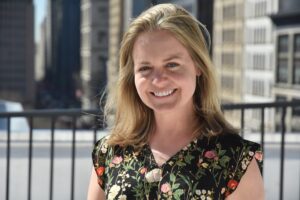 By design, it’s not easy to reach consensus on code change proposals. Even the smallest tweaks could have significant repercussions on building design, construction, maintenance and safety. And that means project budgets and schedules will feel the effects, too. When considering the potential benefits of a proposed code change, one of the most important things that consensus committees look for is abundant supporting evidence to back it up.

“We all have opinions, and we can go around in circles for days talking about them, but if we ultimately want to come to a consensus, there has to be something in front of us to look at,” said Emily E. Hoffman, P.E., CEM, LEED AP, the incoming vice chair of the International Code Council’s Commercial Energy Code Consensus Committee, which is charged with reviewing code change proposals for the 2024 International Energy Conservation Code (IECC). “That’s really the deciding factor.”

Hoffman, the director of energy code compliance for the New York City Department of Buildings, has seen firsthand how supporting evidence — or the lack of it — can make or break a code change proposal. “When we were working on the 2016 energy conservation code, there was a really big push to make air-leakage testing mandatory, and initially, there was pushback against that proposal,” Hoffman recalled. “The consensus committee requested that a cost-benefit analysis be conducted, and based on the results, the committee decided to only require testing for a specific subset of buildings for that edition. Over the next three years, we continued to collect and examine data, and as a result, in the 2020 code we were able to make it a mandatory requirement for many more buildings.”

“It took another code cycle, but we have it now,” Hoffman declared.

To ensure New York City’s energy conservation code continues to reflect the latest professional consensus, the code committee has established good working relationships with code officials across the country and will regularly solicit their opinions and expertise on proposals. Learning how other jurisdictions have dealt with similar proposals, Hoffman said, ensures greater uniformity across the country.

Even when the evidence is there, sometimes the industry is not ready to support the change. In that case, the committee can use the supporting documentation to educate people in an effort to build support for the next code cycle. For example, Hoffman recalls how, during the last code revision cycle, several committee members advocated for the inclusion of thermal bridging standards in the city’s energy conservation code, as a way to mitigate heat loss caused by gaps in insulation, air movement and other factors. “There was a lot of pushback on that,” Hoffman said. “People just weren’t ready. So we said, ‘Okay, we’ll require the documentation now and start doing outreach to get designers familiar with what thermal bridging is and how to document it.'”

When Hoffman joined the New York City Department of Buildings eight years ago, there was no program in place for reviewing and approving code changes for energy conservation. Since then, Hoffman has overseen three code update cycles. “Over the last eight years, we went from having nothing in place to being one of the leaders in the nation,” Hoffman said with pride. “Our consensus committee has been pushing people to provide research and evidence, and it’s worked well. My feeling is that since it has worked so well here, maybe it’ll work nationally, too.”

New York City differs from other jurisdictions in that its energy code is shaped by legislation. “We have what you could call a policy lever in New York City,” Hoffman explained. “We have laws that dictate what our next energy code needs to look like.” For example, the city council recently passed a law that requires the Department of Buildings to adopt a stretch energy code developed by the New York State Energy Research and Development Authority. The model code, called NYStretch, is intended to help jurisdictions meet their energy and climate goals by establishing requirements that are roughly a cycle ahead of the next statewide energy code.

Looking ahead, that will eventually mean the adoption of a performance-based energy code that will set greenhouse gas emission caps on existing large buildings over 25,000 square feet — though it’s up to the jurisdiction to define applicable performance metrics. “We know right now that our energy code doesn’t meet those caps for new construction,” Hoffman said. “If a building is constructed according to the current code, it may not meet this new emissions cap and the operators will end up paying a fine for non-compliance. When we start planning for the 2023 code, that’s going to be on everybody’s mind: How do we improve the code so that a new building or a retrofit aligns with these greenhouse gas emissions targets?”

Hoffman sees that kind of foresight as a viable planning tool for the Code Council’s energy conservation codes as well. “We keep hearing that if we’re going to reduce our greenhouse gas emissions, then codes are going to be a very important tool for accomplishing that,” she said. “In the last decade or so, we’ve been taking incremental steps in efficiency improvement. But if we’re really serious about reducing our greenhouse gas emissions, then the code needs to go a lot farther.”

Hoffman sees the growing interest in performance-based options as having the twin advantages of providing designers with more flexibility, while also encouraging the more widespread adoption of energy conservation codes. “There are a lot of unknowns right now, but we have an opportunity to really set some standards for the future — not just in terms of the codes themselves, but also in terms of how consensus is reached,” Hoffman explained. “It’s an exciting time to be involved in shaping the future of the IECC, and I’m excited to be participating on this committee.”