Steve Tafoya has had various high-level, high-pressure jobs throughout his career. Regardless of where he was serving, he always has been interested in safety inspections. “When you think about it, you can live in a home or work in a building and never have to call police or fire for help,” said Tafoya, building official and director of public safety for Fayette County, Georgia. “And that’s nothing against police and fire; they do a wonderful job. But a building inspector makes sure that a structure is safe to live or work in, setting the tone for a lifetime of safety.”

For all his work in making sure his department is as safety conscious as he is, Tafoya earned the International Code Council’s Excellence in Public Safety Award for 2020. Given in honor of four individuals who exemplified the qualities cited for granting this award — Ron Burton, John Fies, Wilbur H. Lind and Alton Riddick — the award is presented to a member of the building industry who consistently demonstrates the qualities of integrity, professionalism and dedication in their services to the profession and whose personal standards represent the spirit of public service to the development of codes and standards in the interest of public safety.

Tafoya, an ICC Master Code Professional with 33 certifications, said he earned his first three before even starting his career in inspections. For a time, he had his own home inspection company, but left that because, he said, “there is a big difference between home inspections and building inspections.”

And the department’s mission spells out clearly what Tafoya’s expectations are: To deliver a service to the citizens of Fayette County that will verify structures are constructed in accordance with the construction codes and standards for the purposes of safeguarding the safety, health and general welfare of the public from hazards attributed to the built environment.

One of Tafoya’s first projects when he became assistant director six years ago was to address a problem that annoyed him to the point of distraction ever since he started with the county 15 years ago as an inspector. “Paperwork. I looked at all the positions in the department, and I saw where we could eliminate paperwork. Before, an inspector would go out with a pad, write down notes and give the contractor a carbon copy. Then, he’d go back to the office and type it all in. Just a waste of time. Or a person will come in with plans, and something will be missing. We’ll have to send them home. Sometimes that happened two or three times. Meanwhile, the work is piling up.” 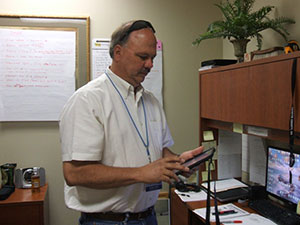 Tafoya implemented an electronic permitting system that allows inspectors to make notes on-site using iPads, which also contain copies of the project plans. That’s important to have when making an inspection, he said. “I tell my staff to pay close attention to the plans,” he said. “I spend most of my time on enforcement.”

The electronic system was critical when the COVID-19 pandemic restrictions came down in late winter. Business wasn’t hurt at all, he said, and even has picked up. “My manager asked me what we would have done without the electronic permitting system,” Tafoya said. “I told him we’d be in big trouble.”

With 33 Code Council certifications to his credit, it’s no surprise Tafoya wants to make sure the county hires the most qualified, and that those hires keep up on their training. “After someone passes a certification, I’ll tell them that paper means nothing without the experience,” he said. “So, we’ll take them out and show them how to do certain inspections. “A lot of times, I’ll see a project and pull in one of the less-experienced inspectors and say, ‘Come on. Let’s go see what this is all about.’”