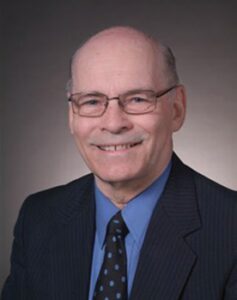 Dr. Porter serves his community and is actively involved in several professional associations. Some positions that he currently holds include chair of the King-Am Neighborhood Association in Ames, Iowa, (a position he has held for nearly 25 years) and chair of the Fiber Composite and Polymer Standards Committee of the American Society of Civil Engineers (ASCE). He has chaired several standards committees, including the Steel Deck with Concrete of ASCE; the Masonry Joint Standards for The Masonry Society (TMS), the American Concrete Institute (ACI) and ASCE; and the Administrative Committee of the Codes and Standards of ASCE. Besides chairing these standards committees, he has served on several other standards and building code committees and is still active on several of them.

He is also a distinguished member of the ASCE and a member of the Committee on Ethical Practices of ASCE and the Committees of Fiber Reinforcement for Concrete Structures and of Fiber Reinforced Concrete of ACI. He is also a fellow of ACI, TMS and ASCE. He has served as president of the Structural Engineering Institute and president of TMS. He has served in multiple terms on his church board of trustees, including president and is currently the vice president.

When he isn’t doing assessments for IAS, or participating in committee or community work, Dr. Porter enjoys playing and following sports (his favorites are football, basketball, and racquetball), collecting model trains, and adding to his stamp and coin collections. His consulting, investigation and inspection work has taken him to different locations in the U.S., however Ames, Iowa, has been his home base since 1961 where he currently lives with this wife (also an ISU graduate and employee) of 51 years. Here’s what he had to say about doing IAS assessments.

IAS: What is your favorite part of doing assessments?

Porter: The rewarding feeling of being able to help improve a laboratory or facility or process during the assessment. I try to aid in the process to make improvements as well as making an evaluation at a facility.

IAS: What is the most challenging part of doing assessments?

Porter: When there is a loss of the signal or internet during a remote assessment. Another challenge is to squeeze in all the items to review within the limited time frame.

IAS: How did you start doing assessments for IAS?

Porter: I was recruited by a long-time acquaintance on one of the mutual code committees who worked for the ICC-ES system who told me when I decided to give up teaching, I would be eligible to be considered as an assessor for IAS. He asked me if he could submit my name, and after passing multiple courses and exams in the IAS system, I was “sucked in”.

IAS: What did you enjoy most about being a professor?

Porter: The most rewarding experiences were my opportunities to pursue research in areas related to building codes; namely, structural engineering, composite structures, FRP, composite steel deck floor slabs, reinforced concrete, structural steel, masonry structures, and disaster investigations. My most fond memories were the awards received from these activities and the outstanding people that I’ve had the privilege to work with on the national code committees, leading to fruitful contributions to the building codes resulting from my research.

IAS: What skills did you take from your time as a professor to becoming an IAS assessor?

Porter: The experiences from being a president of seven organizations from speaking at numerous conventions, national meetings, and being an invited speaker of special meetings, including, e.g., ethics presentations based upon my work on the national ethics committees, and the opportunities to work with a lot of great people in the various professional organizations.

IAS: In your opinion, what is the best value of becoming accredited?

Porter: The international reputation and recognition of a facility to carry out a testing or other procedure according to prescribed recognized criteria, such as those standards developed via the consensus process.