During its annual Fall 2017 conference, the Wyoming Conference of Building Officials (WCBO), a chapter of the International Code Council, honored retiring president Keith Bowar for his 25 years of service and dedication to building safety in the state of Wyoming.

Originally from Mitchell, South Dakota, Keith relocated to Gillette and started his career in 1978 as a plumber. Prior to his move to Wyoming, Keith’s job in South Dakota required long hours on the road, away from his wife and child. With his family at the forefront of his decision, Keith made Gillette his new home creating more flexibility within his schedule to spend more time with his family. 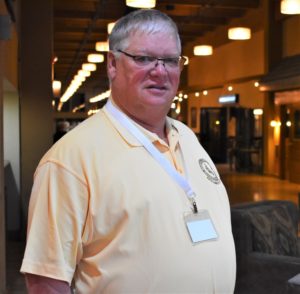 In 2012, Keith accepted the position of Building Code Official for Campbell County. When asked about his experience he said the transition from plumber to building code official was smooth due to the connections he made over the years with fellow contractors. “I spent a lot of time in the field with contractors so when I went to the other side, I understood all their problems. If you treat the contractors well, they will treat you well.” Keith is proud of the strong relationships he’s facilitated between building officials and contractors in Campbell County. “We have a good working relationship with our contractors.”

Over the years, Keith dedicated much of his work to creating cohesion between the building codes in the city of Gillette and Campbell County, which comprises Gillette, Wyo. He says, “Since I started at the County, I’ve worked really hard to get the county and the city aligned with all the codes so that contractors don’t have to remember two sets of rules and regulations.” Keith’s diligent work paid off and he is proud to see “very few differences between the county and the city.”

Keith’s solid support system throughout his career has been key to his success. He credits Steve Anderson for being an inspiration throughout his years in Campbell County. “Steve was a great mentor and a very knowledgeable code person — he helped me understand and appropriately address the codes,” says Keith.

He is also grateful for his Code Council colleagues who have supported him over the years. Keith says, “Ron Piester, Code Council Vice President of Membership and Certification, has been a wealth of knowledge for me. If I ever need help with anything that I wasn’t quite sure of, I go to him.” Code Council instructor Patrick Vandergriff has also been influential to Keith’s success. “Pat is another guy that you can call and get answers from.”

After years of working with Code Council Board of Directors Member Jim Brown, CBO, CFPS, he and Keith developed a professional rapport that grew into a strong friendship. “Jim Brown has been extremely helpful. He and I talk daily and run situations between each other constantly.” Keith also praises Code Council Senior Vice President of Government Relations Sara Yerkes for her support and friendship over the years. “Sara is just a top notch professional!”

When asked about advice he has for the younger generation involved in the building industry, Keith reminds them of the importance of building comradery between contractors and building officials. “You have to remember that as the building official, you are not the king and you are there to help those folks,” he adds. “Be sure to build a good reputation for yourself because this is definitely a rewarding career.”

As he transfers his presidential power, Keith’s parting words of advice to new President Ken Rogers are to “listen to your membership,” as that is a core value of the Code Council and has been essential to Keith’s tenure as WCBO President. Keith recognizes that the resolution of every issue will not always leave everyone happy, but “at least they know that you are willing to listen.”

Although Keith has retired as the WCBO President, he continues to dedicate himself to his building code official position in Campbell County, Wyoming. The Code Council is proud to have Keith Bowar as active and influential member of the association and building safety industry.