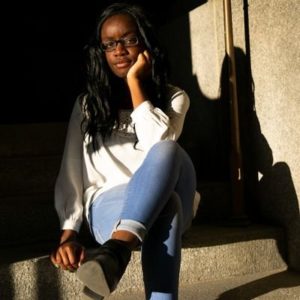 In this month’s episode of the ICC Pulse Podcast, recent Boise High School graduate Therese Etoka joins the International Code Council’s Whitney Doll to discuss her passion for building safety in her hometown of Boise.

Whitney Doll: When did you first realize you were interested in political activism and how did your background influence you?

Therese Etoka: I think I’ve always been interested in political activism, but when I was younger I was unsure of what to call it.  I have always been aware of injustice around me, whether happening in Idaho, other parts of the country, or back home in the Democratic Republic of Congo.  As an immigrant fleeing war and conflict in the Democratic Republic of Congo, I knew that life in the United Stated gave me the invaluable opportunity to raise my voice. Remaining silent would never resolve the various conflicts and issues at hand, it will only make things worse for the future. I believe my background from Congo really influenced me to step up, use my voice and use the platform I was given to speak out against those injustices.

Doll: That’s very inspiring. Can you share how you first got interested in building safety in particular and what caused you to lead the charge for code adoption in your community?

Etoka: I became interested in building safety while being a leader in the Climate Justice League, which is a group that I formed with a few other students in our Boise school district. We are advocates for climate change. The topic of the building codes arose when addressing public safety. We learned of the upcoming city council meeting proposing r the adoption of new building codes within Boise. This code adoption would ensure that future buildings were safe and sustainable. I recognized the importance of this code adoption because I’d witnessed the ongoing growth of Boise – in fact, it was listed in Forbes as one of the fastest growing cities in America. I believed it was important to adopt the new codes and set that precedent of ensuring safe buildings within our community.

Doll: I know you were already involved in politics within your high school as you were a student leader on campus, but I can’t imagine what level of courage it must have taken for you  as a high school student to go meet with your local city council. Can you walk us through a step-by-step of what your experience was like with the Boise City Council and what it was like to advocate for an issue in such a public forum?

Etoka: I remember the City Council meeting was scheduled to begin at 6:00 p.m. that night and I was a little nervous. This was my first City Council meeting and now I was planning to give a testimony and speak out about a passionate topic. I was unsure how everyone would respond.

The meeting ended up being much longer than I anticipated – it was originally scheduled to last from 6-8:00 p.m., but I actually left around 11:15 p.m. Overall, it was an interesting experience. I had to sit and listen to everyone’s testimony until it was my turn to present. I had to listen about many different issues throughout the community. As I was listening to other people give their testimonies, I look around the room and see how the mayor and other City Council members took different issues and how the public reacted.  Meeting attendees created a civil environment and everyone welcomed to great discussion. .

When it was my turn, I was a little nervous, but I went up and I said what I had planned to say which included my proposition and what I wanted to see with our upcoming building code adoptions. I remember looking at the City Council members, the President Pro Tem Lauren McLean,  our mayor and just talking with them. I was trying to get them to hear what I was trying to say. I remember that afterwards I got a smile from the mayor. It was a good feeling. It was a good experience just being out there and advocating for something that I feel is important. There aren’t many opportunities for people my age to really voice our opinion on something that affects our community. I was really grateful for the opportunity to do so.

Doll: So the end result of your advocacy from the Boise City Council was that they adopted the 2015 International Building Code. So congratulations. Are you planning to stay involved in building safety or code adoption advocacy?

Etoka: I will. It may not be my main issue or subject of advocacy, but as  I move to a different state this fall for college, I want to stay connected with the building safety. I want to learn more about the buildings of my college and to help to ensure that future buildings and remodels will have the least impact on our energy systems. But I also want to stay in touch and remain updated on what is happening in Boise. With all of the new infrastructure and construction and I just want to make sure that what we do, what we remodel and what we build continues to have the least impact on energy systems and that it’s reducing future pollution. I think it is really important that these codes are not just about buildings but also about building a community that is good for our future.

Doll: You mentioned you’re going to college in the fall. Can you tell us where you are going and what your plans are for the future?

Etoka: I am headed to the east coast to Connecticut College in New London, Connecticut. I plan on majoring in international relations with an emphasis on political science and minoring in French.

Doll: Sounds exciting. Sounds like you have a lot to look forward to this fall. Congratulations. Do you have any advice that you would like to give for other students or young people looking to get involved?

Etoka: I feel that  sometimes as young people, it can be  so overwhelming and  seems like  adults are making all the decisions and doing everything. But students have to realize that we also have our own voices. And even if we can’t vote, I mean I just turned 18 so I wasn’t able to vote, we  can still advocate, we can still canvas, we can still ask our peers and our friends who are of age to vote and get educated around. The people elected will  affect your future. There are many different ways to be involved. Whether you’re interested in women’s rights, human rights, climate justice or anything else, just look for groups in your community that are advocating for topics you’re passionate about. And if there’s not a group, form one. I was always looking for that kind of group that had the same kind of message and  values that I wanted but there wasn’t really one. So in the end, I ended up  forming one and then finding the place where I felt that I belonged. I found a  place to really advocate and push for the change that I wanted. I feel that it is really important that people know that we also have a voice. This is our future and what we do or do not do now is going to affect our future and our children’s future. I feel is really important to be active.

Doll: You have a very inspiring message. But I do have just one final question for you and we ask all of our guests this one if you could choose a favorite building maybe due to style of architecture or type of materials used in a fun story or some connection you have to the building. What would it be and why?

Etoka: There’s actually a few buildings but the one that I would choose is the famous Louvre Museum. I have never  visited but I think the architecture and  the way it is designed with the pyramid shape has always been something I look to. I also speak French, so going to a French speaking country and seeing that building is something that I would like to do. I want to check to see if the Louvre has its building codes up to code. . A lot of tourist visit and it’s really important that that building itself is safe and stable for visitors.

Doll: I think you already have another project in the works and I hope you get to visit someday soon.

The ICC Pulse Podcast is a monthly podcast that offers listeners the inside scoop on the International Code Council and the building safety industry. Episodes of the ICC Pulse Podcast will feature interviews with leading industry experts discussing a wide range of topics, including current events and new technologies. Click here to listen to the episode and be sure to subscribe on Apple Podcasts, Google Play and Spotify. Follow the International Code Council on Facebook and Twitter, and spread the word about our podcast using the hashtag #ICCpulsepod.

Email questions or suggestions to communication@iccsafe.org.