Pursuing a passion for code inspection 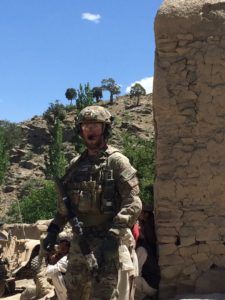 When Sergeant First Class Mike Reese decided to retire from the United States Army after 20 years, he wanted to find a way to put his experience to use in a new career. But after having traveled the world as part of the United States Army Special Forces, he didn’t like the idea of always being on the road in his new job.

“In Special Operations, I was working all the time, so work was always on my mind,” Reese said. “When I retired from the military, initially I had plans to do contracting work, but I started to sour on the idea of being gone all the time again.”

Reese was responsible for managing the logistics of his unit’s deployments, which included preparing everything for shipment, coordinating with various customs agencies and embassies, and making travel arrangements from their base of operations in Fort Lewis, Wash., to remote camps around the world – and then building the camp when they arrived.

Reese built barracks, hospitals, dining halls and command centers, always closely following the Army’s manuals and requirements for specific materials and construction standards. He was also responsible for overseeing the installation of supporting infrastructure such as electrical and sanitary systems.

Reese wanted to put that construction experience to use in the civilian sector, but at first he didn’t know how. And, he says, he didn’t really care where, either.

“After dragging my wife around with me for 17 years, I left it up to her to decide where we would go,” Reese recalled with a chuckle. “I didn’t care where we ended up because I was so used to traveling anyway.”

That’s how Reese and his wife ended up in Kansas near her family. Shortly after moving there, in August of 2016, Reese saw a job posting for a code services officer for Manhattan, Kan.

“I was interested in the concept of code inspection,” Reese said. “I thought to myself, I have a construction background from the military, I have a certain level of inspection-type experience, so why not try that?”

Brad Claussen, CBO, assistant chief of risk reduction and code service with the city of Manhattan, was one of the people who interviewed Reese.

“We were looking for someone to replace one of our long-time building inspectors who was retiring,” Claussen recalled. “Whoever we hired would have big shoes to fill.”

Reese immediately stood out because of his enthusiasm for the work and his engaging personality. “He was such an easy person to talk with during the interview,” Claussen said. “We could tell right away that he would be great at communicating with the people he would be working with.”

When Reese joined the staff of three building inspectors, two plan examiners and two fire inspectors who together serve a community of around 60,000 people, he immediately began absorbing everything he could about the code inspection process.

“I told him, don’t try to learn it all in a day, or a week or a month,” Claussen said. “But he buckled right down and got to work.”

Reese was also fortunate that the inspector he replaced, who was himself a Vietnam veteran, was able to stay on for a couple of months to help Reese transition into his new job.

“I think the two of them had a little bit of something in common,” Claussen said. “When [the retiring inspector] left, he was comfortable that everything was going to be in good hands.” 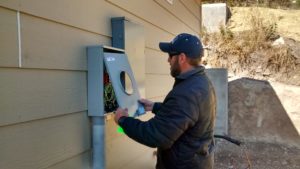 As a code services officer, Reese examines the structural aspects of a building during construction according to the International Residential Code (IRC), which Manhattan follows.

“I make sure everything is put in right and that the building is safe and has been built correctly,” Reese said. “We’re basically just keeping people honest.”

Because of his desire for honesty and fairness, Reese has quickly earned the trust and respect not only of his fellow inspectors but also of the contractors over whom he has oversight.

“Mike expects something to be done correctly, as we all do, but at the same time he’s good at working with the contractors in our jurisdiction,” Claussen said.

“He’s also willing to dive into the code book wherever and whenever he has a question,” Claussen added. “If he’s not sure of something, he’s going to ask.”

Reese credits his military training and experience for that care and attention to detail.

“In the military, if you have a task to do, there’s a manual to back it up,” Reese explained. “It’s familiar to veterans. In construction, you’re constantly referring to codes just like you used to refer to military manuals. There’s a certain amount of base skills that transfer over.”

“If someone was successful in the military, they’re going to transition well into this field without requiring a lot of handholding,” Reese said.

“The military offers people such a wide variety of skills and experiences. If you’re looking for someone with a broad background and a lot of life experience, I think it’s definitely a plus to look at our military vets and give them a chance,” Claussen said in agreement. “Sometimes they just need someone to give them a chance.”

Claussen believes that people who succeed in code inspection understand that it is a team effort, and veterans understand what it means to be part of a team.

“If you’re looking for someone who’s a team player, definitely consider a military veteran,” he said.

After being on the job for 18 months and earning his residential building and plumbing inspector certifications, Reese is busy studying for the electrical inspector exam. The knowledge he has gained on the job is helping him to remodel his house — to IRC recommendations, of course.

“You get to meet new people every day, and you’re always out in the community,” Reese said of his new career. “You get to be part of the progress that you see around you. And that’s an interesting experience.”

“If you are a self-starter and someone who can operate on their own, this is a job you can excel in,” Reese added. “It’s been a great opportunity.”