S.K. Ghosh honored for his dedication to seismic safety 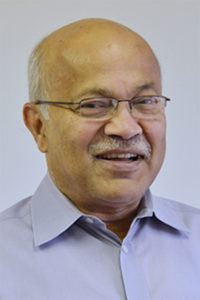 Celebrating the 40th anniversary of the Building Seismic Safety Council (BSSC) — one of the most important initiatives under the National Earthquake Hazards Reduction Program — the National Institute of Building Sciences (NIBS) recently recognized the leaders who have provided significant direction to the BSSC mission and contributed to its success.

Dr. S.K. Ghosh, Ph.D., president of S.K. Ghosh Associates LLC, which is a part of the International Code Council’s family of solutions, received the 2021 BSSC Excellence Award, which recognizes individuals who have made a significant difference in advancing seismic design and construction and improving the safety and economic viability of building systems. Whether it is for significant code change provisions or the advancement of engineering and building science, or a long time of outstanding service, the BSSC Excellence Award is bestowed to those driven to protect the health, safety and welfare of the public.

“Each award recipient dedicated time, hard work and expertise to our organization for the betterment of the nation,” said Lakisha A. Woods, CAE, president and chief executive officer of NIBS. “Their efforts and knowledge sharing have improved building performance, minimized the damage from earthquakes and saved lives.”

Dr. Ghosh is known internationally for his work in earthquake engineering. He specializes in the analysis and design, including wind and earthquake resistant design, of reinforced and prestressed concrete structures. He has influenced seismic design provisions in the United States for many years by serving on or chairing numerous national technical committees and advisory panels. Dr. Ghosh is an honorary member of the American Concrete Institute (ACI) and is a Fellow of the American Society of Civil Engineers (ASCE), the Structural Engineering Institute and the Precast/Prestressed Concrete Institute. He is a member of ACI Committee 318, Standard Building Code, and the ASCE 7 Standard Committee (Minimum Design Loads for Buildings and Other Structures). He is a former member of the board of directors of ACI, the Earthquake Engineering Research Institute and the Building Seismic Safety Council. He is a member of the board of governors of ASCE’s Structural Engineering Institute.

He has long been a provider of continuing education related to structural provisions of building codes to the structural engineering profession and the code enforcement community. His books and other publications on structural design are widely used by those in design practice. In addition to authoring over 200 papers and books, Dr. Ghosh has investigated and reported on structural performance in recent earthquakes.

Among his many awards, on the 50th anniversary of the Precast/Prestressed Concrete Institute in 2004, Dr. Ghosh was named one of 50 “Titans” of the U.S. precast/prestressed concrete industry. He was awarded ASCE’s 2013 Walter P. Moore Jr. Award for his contributions towards improving the consistency, accuracy and clarity of structural codes and standards throughout the U.S. and abroad.