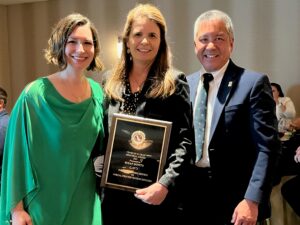 “Susan has supported our association, code officials, design professionals and the industry,” said Northern California Fire Prevention Officers President Ian Hardage in presenting the Charles H. Gray Award to Dowty. “[She] keeps us engaged and aware of opportunities to be involved, tools to help our industries, and continually supports our members and board of directors.”

In her work for the Code Council, she works in collaboration with California and Nevada municipalities, association chapters, members, stakeholders and all parties interested in advancing the mission of the Code Council to support the adoption and use of the highest quality codes, standards, products and services for the safety and performance of the built environment. She also provides support to code officials, design professionals and the academic community on the implementation and use of the International Codes.

“This is a significant achievement for Susan and is another example of how the Code Council’s talented staff is dedicated to serving our members, stakeholders and the industry,” said International Code Council Chief Executive Officer Dominic Sims, CBO. “Susan’s knowledge and expertise are key resources for the Code Council as she works with California and Nevada jurisdictions, chapters and members to enhance safety, affordability and resiliency in the built environment.”

Prior to her role at the Code Council, Dowty led an accomplished career within the public, private and non-profit sectors as a staff engineer for the Code Council’s legacy organization — the International Conference of Building Officials — and as a structural engineer and vice president with S.K. Ghosh Associates, a seismic and building code consulting firm. Her detailed work and strong experience in the administration, development and interpretation of building code provisions led to an appointment by former California Governor Arnold Schwarzenegger to the California Building Standards Commission from 2006 to 2010.

Over the course of her career, Dowty has played an active role in the development of structural provisions for the International Building Code, where she served as the Structural Committee Secretariat. She also has been involved in the development and delivery of training programs for code officials on structural provisions in building codes, as well as the development of a number of structural engineering publications. She served as the consultant for the reformat of the American Society of Civil Engineers’ ASCE 7-05 Minimum Design Loads for Buildings and Other Structures.

She has been a member of the Seismic Code Support Committee [previously known as the Code Resource Support Committee] since 2009 and was a member of the Building Seismic Safety Council’s Technical Subcommittee 8 (Nonstructural Components and Nonbuilding Structures) Committee from 2006 to 2009, where she also served on the Board of Direction from 2016 to 2018. In 2019, she was appointed to serve a three-year term — and has been re-appointed for another three-year term (2022–2025) — on the National Earthquake Hazards Reduction Program Advisory Committee on Earthquake Hazards Reduction where she helps play a vital role in the committee’s process. She is also a member of the Structural Engineers Association of California, previously serving on its board of directors, and is on the board of directors of the Structural Engineers Association of Southern California (2020–2022). For her service and promotion of the building code and code enforcement professions, she received the 2018–2019 Industry Achievement Award from the California Building Officials.