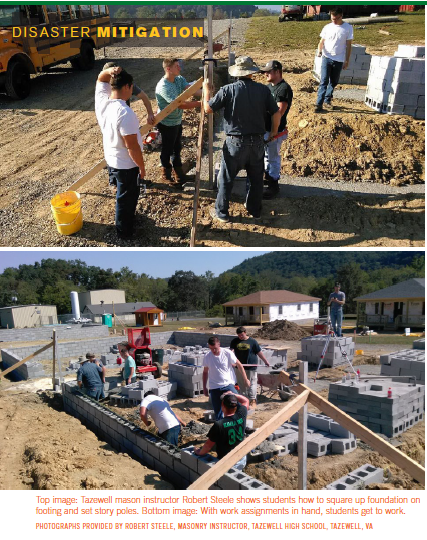 Disaster management can be described as the organization and management of resources and responsibilities for dealing with all humanitarian aspects of emergencies, preparedness, response and recovery in order to reduce the harmful effects of all hazards, including disasters. When disaster hits, neighbors are often an essential part of the team who show up to assist in the process.

On June 23, 2016, the skies opened up and a massive storm delivered 10 inches of torrential rain to West Virginia. This amount of rain in a 24-hour period quantified the storm as a 1,000-year event, according to the National Weather Service. West Virginia Governor Earl Ray Tomblin declared a state of emergency in 44 counties. As water receded, it was discovered that 23 people had lost their lives during the flooding. Citizens in the affected counties went right to work helping neighbors. Folks arrived from surrounding counties and states to lend a hand. Funding programs were set up and donations started arriving from around the country.

West Virginia businesses and community leaders partnered with SBP, a national disaster recovery nonprofit organization, to launch Homes for West Virginia. Local business-man Tom Crabtree, president of Homes for White Sulphur Springs, joined with other business leaders and began to clean up and build homes for the devastated families.

One of the partnership’s projects was the Hope Village community in White Sulfur Springs. The call went out for tradesmen and material along with funding to start the project.

On September 24 and 25 Robert Steele, a masonry instructor at Tazewell County Career and Technical Center, and principal Rob Gillespie took nine students from the high school’s masonry program to Greenbrier County, W.V., to build the foundation for a house that will be donated to a family that lost their home in the flood.

After I spoke with Steele and his students at Tazewell, it was evident the students learned several lessons during the construction project. They received real world knowledge in squaring up their foundation, setting corner pins, establishing story poles along with building corner leads and running block. As work proceeded throughout the day, the students realized the importance of time management. Completing a 600-block foundation from the footing up was no walk in the park. The students quickly organized their workforce so they could complete the foundation in 1 1/2 days, and their crew went to work.

As they mixed mud, carried block, laid block, installed anchor bolts, struck the head and bed joints and cleaned the block, a sense of pride was developing among this group. The group of 10—the students and Steele—had created something that will bond them together for a long time. When I asked the students what they thought of Steele’s idea, the response was unanimous among the young men. They agreed that when a neighbor needs help and you have the skills to meet the need, you do it. They said several families moving into the new homes came and thanked them for their work. It was truly inspiring for them to see what their trade and skill meant to these families. Isaac Collier, one of the masonry students, said after this project he is more determined than ever to become a mason.

The determination of the masonry students and the devotion of their instructor to their education helped them not only learn a trade, but learn that they can use the skills they possess to truly make life better for others.

The International Code Council, along with the Virginia Building and Code Officials Association (VBCOA)—the official sponsor of Tazewell High Schools participation in ICC’s High School Technical Training Program (HSTTP)—are grateful for such an outstanding group of young men. We look forward to welcoming them into the construction profession and encourage them to participate in code development. After seeing firsthand the destruction created by disaster, we support them in learning and leading the way for the next generation in disaster mitigation.

In closing let’s all remember the inspiring words Steele challenges his students with every day: “Teamwork makes the dream work!”

As noted by the letter of appreciation received from Crabtree after the foundation job was completed, these students were able to see firsthand how important it is to give back to the community and to help others in need. Read excerpts from the letter below.

A few days after the flood, I received a phone message from Robert Steele indicating that he and his masonry students had heard about Hope Village and would like to help by building a foundation for one of our homes. Shortly after Mr. Steele’s call, I was approached by representatives of the Greenbrier County, W.V., Board of Education who indicated that Greenbrier West High School would like to help by building a home with their carpentry class. The only problem was that they don’t have a masonry program in Greenbrier County, so we would need to find someone to build the foundation. Needless to say, I remembered Mr. Steele’s phone message and called him.

On September 24 a busload of students accompanied by Mr. Steele and Mr. Gillespie arrived in White Sulphur Springs to build the foundation on which Greenbrier West High School will build a home. They arrived early in the morning, in spite of an epic football game the night before that was played in partial darkness and ended with Tazewell on top by the unbelievable score of 69 to 62. The students and faculty worked long and hard on Saturday, slept well on Saturday night, and finished the foundation on Sunday morning. It was inspiring to watch their enthusiasm and attention as Mr. Steele led by example. He is an outstanding teacher, and your young men are outstanding students of their craft.

On behalf of the people of White Sulphur Springs, W.V., I would like to thank The Tazewell County School Board, The Tazewell County Board of Supervisors, Mr. Gillespie, Mr. Steele, [students] Tyler Wright, Kyle Lester, David Mitchell, Charles Abel, Isaac Collier, Joshua Smith, Patrick Cole, Elijah Dawson and Chris Solis for your astonishing gift to our community. These young men learned the joy of giving and the value of their craft in a lesson they will not soon forget.

I believe this generous gesture has created a lasting bond between our schools and our communities. Please know that if we hear of any misfortune settling on Tazewell County Virginia, the good people of White Sulphur Springs and Greenbrier County will rush to your assistance.