The late Jim Sealy, a founding father of the Code Council, honored with its Meritorious Service Award

Phoebe Lou Sealy said that years ago, architects generally had no use for codes, but her late husband, Jim W. Sealy — or JimmyWayne (all one word as they say it Texas) — was different. “One time, he was working on plans for a large mall, and there were no codes for the interior design. So, he went to officials at BOCA (the legacy Building Officials and Code Administrators International) to complain,” Phoebe Lou remembered. “They said, ‘You’re here to complain? Fine, join this committee, and help us figure it out.’” 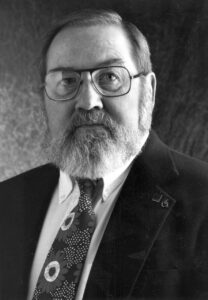 That started Sealy on the road to having an impact on building codes like few others have during his 50 years in the building industry. By the time he passed away on May 10 of this year at the age of 84, Sealy had amassed many of the major awards from the various groups with which he had served, including the National Institute of Building Sciences’ Mortimer M. Marshall Lifetime Achievement Award and the International Code Council’s Bobby J. Fowler Award, the building code administration profession’s highest honor.

Phoebe Lou got the word recently her late husband will be the posthumous recipient of the Code Council’s 2020 Meritorious Service Award, granted to an individual who has given unselfishly of time and talent in furthering the development of Code Council codes and standards. Sealy certainly did that, working with fellow Texan Bob Fowler — the first chairman of the Code Council Board of Directors who led the charge to consolidate three regional model code organizations into one association — for a quarter-century to develop one model code, and ultimately, one model code organization.

So respected was Sealy in matters dealing with architecture, building codes, fire and life safety standards, general construction, and accessibility issues, that he was called to testify as a professional witness 27 times over some four years; 14 times for the plaintiff and 13 times for the defense. But it was his work, along with Fowler’s, that got the building industry thinking there had to be a better way than working with three sets of codes from three legacy organizations, depending on what region of the country you were working in.

In 1975, the American Institute of Architects (AIA) put out a white paper recommending one common model code instead of the organization having to prepare documents for BOCA, the Southern Building Code Congress International (SBCCI) and the International Conference of Building Officials (ICBO), said longtime friend David Collins, now with the Cincinnati-based Preview Group Inc. “Jim and Bob Fowler were two of the people who carried that message throughout the 25 years it took to get that done,” Collins said. “His passion for codes and standards became his mission.”

Not only did Sealy buck the trend of architects eschewing building codes, but he also drew in young colleagues. “He was a mentor to a lot of the younger people, especially architects. He taught me a lot about codes as I watched him during those meetings,” said James “Tim” Ryan, chief executive officer for the International Association of Building Officials, who also met Sealy during those early 1980’s meetings on consolidation. “He would introduce himself by saying, ‘I’m Jimmy Sealy, an architect from the Republic of Texas,’” Ryan remembered fondly. “He just drew you in.”

Proud as he was of his Texas roots, Sealy took some ribbing for getting his degree from the University of Oklahoma, where he met Phoebe Lou. Lucky for them, she said, he had a great reason for attending Oklahoma instead of Texas A&M University, as he originally planned. “Jim found out that the famous architect, Bruce Goff, was teaching there,” she said. “Goff was a partner of Frank Lloyd Wright. Jim went to visit the campus, found Goff and wound up talking to him for four hours.”

Colleagues said Sealy took architecture very seriously, approaching a drafting board like a doctor perched over an operating table. “Jim had a feeling for the projects he was involved in, and the direction they should take,” Phoebe Lou said.

Although she accompanied him on as many code hearings as she could, and met colleagues — some like AIA President Soy Williams — who became family, Phoebe said her husband left the architecture and codes at the office. Instead, they shared myriad interests and hobbies: photography, art, just about all kinds of music (including an impressive Jazz collection) and birding. “We explored a lot of the Gulf Coast while birding,” Phoebe Lou remembered. “I think we walked just about every back road in Texas.” 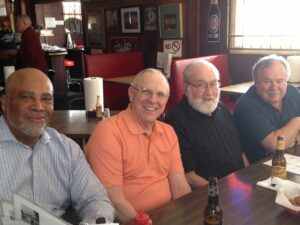 Longtime friend David Collins, now with the Cincinnati-based Preview Group Inc., said birding often was part of the side trips they would take during conferences and meetings. “I remember one day we wound up on a mountain, identifying birds,” he said. “That was a long hike.”

Henry Green, former president of the National Institute of Building Sciences and a past board president of the Code Council, said Sealy was a great friend, mentor and host. Sealy loved to show his Southern hospitality, Green said, whether it was at his Dallas home with Phoebe Lou, or while holding court at a local dive, affectionately referred to as “The Club,” over plates of greasy burgers, fries and onion rings. “He was the quintessential charming host, drawing everyone into the conversation at the table,” Green said.

“Sitting around their table talking and eating with other friends was kind of like being at the family dinner table,” said Williams, who said she still talks to Phoebe Lou often.

Phoebe Lou cherishes the memories and the friendships. She also chuckled at the memories of “The Club,” now razed for a truck stop. “When we mentioned it to some people, they thought we meant a country club,” she said. “One time, they brought us a cheeseburger, but when he opened the bun, there was no meat. We told the waitress. She grabbed the buns, went the kitchen, and came back with the cheeseburger. That’s the kind of place it was.”

Phoebe Lou said the Meritorious Service Award is wonderful. But she knows she would get too emotional if she were to accept it at the virtual Annual Business Meeting in November. So, she asked longtime friend Vel Hawes to accept on her behalf. “Living with Jim was a great adventure,” Phoebe Lou said, her voice cracking. “Everyone should have that type of adventure in their life.”