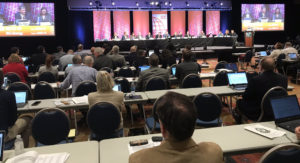 The 2019 Committee Action Hearings took place April 28 through May 8, 2019, in Albuquerque, N.M., to consider proposed changes to the Group B International Codes. The second in the 2021 code development cycle, the hearings saw action on more than 1,300 code change proposals and nearly 185 hours of testimony in two hearing tracks during the 11 days in Albuquerque.

Here are some of the biggest takeaways from the 2019 Committee Action Hearings.

Highlights from the IBC–Structural Committee

Highlights from the IRC–Building Committee

The following are proposals that were recommended for Approval as Submitted or Approval as Modified by the IRC–Building Committee.

Highlights from the IEBC Committee

Here are some dates and information to keep in mind.

2019 Group B Report of Committee Action Hearing is posted

The 2019 Group B Report of Committee Action Hearing from the meeting in Albuquerque, NM are now available. Click here for the results.

The over 1,300 code changes considered at the 2019 Committee Action Hearings have been captured on video. Click here to view the hearing videos.

Click here to see photos from the 2019 Committee Action Hearings in Albuquerque.

Mike Pfeiffer, P.E., is the senior vice president of ICC Technical Services. He oversees the Codes & Standards and Architectural & Engineering Services departments, which includes both the development and maintenance of the International Codes as well as ICC standards. He has been with the Code Council for more than 30 years, starting off with legacy organization Building Officials Code Administrators International. A registered professional engineer in the state of Kansas, Pfeiffer has masters’ degrees in civil engineering and business administration.