The 2018 Committee Action Hearings took place April 15–23, 2018, in Columbus, Ohio, to consider proposed changes to the Group A International Codes. The first in the 2021 code development cycle, the hearings saw action on more than 1,300 comments and nearly 100 hours of testimony during the 10 days in Columbus. The April hearings are the first chance to publicly review proposed code changes and provide feedback for the 2021 International Codes.

Here are five of the biggest takeaways from the 2018 Committee Action Hearings.

Fourteen code changes introduced three new types of heavy timber (Type IV) and corresponding increases in allowable heights and area. As approved at the Committee Action Hearings, certain occupancies have an allowable height of 18 stories, which exceeds the current limitation of six stories. Many of the code changes provide additional details to ensure both the structural and fire resistance integrity of taller mass timber buildings. All 14 code changes were approved.

Numerous code changes submitted to address the fire safety attributes of exterior walls, including cladding. One of the proposals was approved to re-organize the provisions. The majority of the other proposals were disapproved but it is highly likely that many will received public comments and will therefore be considered at the Public Comment Hearing in Richmond in the fall. Of particular interest, a proposal was approved that removed what were allowances for metal composite materials (MCM) to be unlimited in height without more rigorous testing. Typically MCM is installed with other materials such as foam insulation that would still require such testing regardless of these allowances.

Code change F263 was approved which requires that the owner of the construction project designate a fire prevention program superintendent who is responsible for performing daily fire inspections at the construction site. In addition, F264, which was approved, clarified the role and training requirements for fire watch personnel and now requires a fire watch both when the construction exceeds 40 feet above lowest grade and for multi-story buildings where any story exceeds 50,000 feet. Previously, it was based upon height alone. Approved proposal F268 addresses minimum fire flows for construction sites for Type III, IV and V construction.

A group of code changes were submitted to address flammability considerations of A2L and B2L refrigerants used for human comfort. These new types of refrigerants include the significant benefit on the environment as they are intended to reduce the global warming potential of refrigerants on the atmosphere. These were disapproved primarily due to the fact that the applicable ASHRAE standards are currently being updated, and the updates have not been completed.

As we prepare to move into the next phase of the 2018/2019 code development cycle, here are some dates and information to keep in mind. 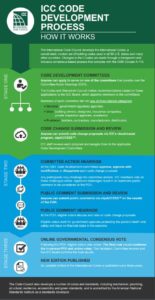 Click here to see photos from the 2018 Committee Action Hearings in Columbus.