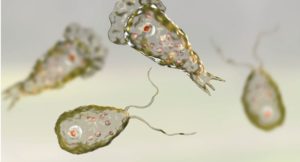 Naegleria Fowleri is a microscopic amoeba that grows in warm lakes, ponds, streams and other untreated fresh waters. (It does not grow in salt water.) In rare cases, this amoeba causes serious illness for swimmers, entering the brain and causing primary amebic meningoencephalitis (PAM), which is usually fatal. Since it was ﬁrst reported there have been a total of 145 cases in the U.S. Of these cases, 141 have been fatal. In 2013 a new drug was found to be an effective treatment if given early.

Is it a health threat in pools and spas?

No. In the time since the CDC ﬁrst began reporting on RWIs there have been no conﬁrmed cases in properly chlorinated pools or spas. The most recent summary of RWIs in treated venues published by the CDC did not report any illnesses caused by Naegleria in the 2000 to 2014 period. Naegleria is easily killed by chlorine. One ppm of free chlorine will kill 99.9% (a 3-log kill) of the amoeba in 9 minutes (CT=9).

One outbreak in a swimming pool did occur in one conventional pool and lasted from 1962 to 1965 in Usti nad Labem, Czechoslovakia. During this time period 16 deaths occurred due to infections from Naegleria. Over several years it was discovered the pool had a cracked false wall with a water-ﬁlled pocket that was not disinfected. The pool had been maintained at 80 to 86 degrees Fahrenheit. As the pool water level was raised for competitive event it ﬂushed the amoebae and organic matter from behind the cracked wall into the pool. Because the free chlorine level was maintained at 0.3 ppm the concentration was not sufﬁcient to kill the amoebae.

Naegleria fowleri life cycle has three phases: 1) the amoeba phase called a trophozoite, 2) a ﬂagellated phase and 3) an environmentally resistant cyst phase. The only phase that causes infection is the amoeba phase. During swimming the amoeba enters the nose and migrates along the olfactory nerve to the brain. Once in the brain the amoeba multiplies and causes PAM.

Naegleria has been detected in swimming pools with less than 1 ppm free chlorine in France and Australia. There are no reported illnesses from these pools.

Naegleria fowleri is one of 40 species of Naegleria but is the only one that causes illness in humans. It is one of the many microorganisms found in natural waters, particularly warm waters. The amoeba phase is sensitive to changes in the environment. Rapid drying kills the amoeba. In less drastic situations the amoeba converts to the cyst phase. There is no known means to control Naegleria levels in lakes and rivers.

Naegleria fowleri prefers warm waters and grows at temperatures up to 115 degrees Fahrenheit (46 degrees Celsius). The amoeba may survive at even higher temperatures for short times but is killed by refrigeration. The cysts can survive for weeks to months in refrigeration but appear to be killed by freezing. The cysts likely survive low temperatures in the sediments of lakes and rivers and then reemerge as temperatures elevate in the summer months. This may explain the geographic distribution in the warm Southern and Western states. (See map). Recent years have seen several incidents in the upper Midwest. 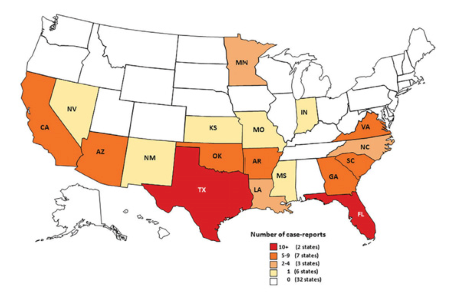 The risk of infection while swimming is very low, even in the warmer states including those with a history of infection. Exposure does not always result in infection. Clinical tests have shown that many people have developed antibodies. Antibodies are developed only after exposure. It is not clear why some exposures result in infection and others do not. Despite hundreds of millions of swimmers in untreated recreational water, there were only 34 cases in the US between 2009 and 2018. The CDC reports that there were 34,000 drowning deaths in the U.S. between 2001 and 2010.

Two recent U.S. cases have heightened awareness of this rare pathogen. In 2016, an 18-year old died after exposure to water at the U.S. National Whitewater Center outside of Charlotte, N.C. It is theorized that she was exposed when her raft overturned. At the time of the exposure, the facility used 200 micron ﬁlters on a portion of the water, low-pressure UV and hand fed chlorination when testing revealed coliforms. During a post-event investigation, the free chlorine in the lower portion of the river was 0.05 ppm and turbidity was 6.7 NTU. The temperature in the lower pool was 86 degrees Fahrenheit.

In 2018, a surfer died after exposure at the BSR surf facility in Waco, Texas. A joint investigation of the local health department and the CDC found Naegleria in sediment from one of ﬁve park venues but not in the surf resort. They also found non-Naegleria amoeba in four of ﬁve venues. At the time of the investigation the surf resort had no detectable free chlorine and was quite turbid (558 NTU). The health department concluded that the likely exposure occurred at this facility.

The amoeba of Naegleria fowleri is sensitive to chlorine. One ppm of free chlorine will kill 99.9% (a 3-log kill) of the amoeba in 9 minutes (CT=9). This low CT value veriﬁes that the infective amoeba of this organism will not survive in a properly chlorinated swimming pool or spa. The cyst, which is not the infective form, is more than four times resistant (CT=42). The resistance of the cyst is nearly identical to Giardia (CT=45) and there are no documented cases of Giardia when the pool contained at least 1.0 ppm of free chlorine.

The amoeba form is quickly killed by drying.

When in natural warm water, swimmers should avoid inhaling water. There are no known mechanisms to control Naegleria in natural waters.

Because this infection is so rare, the development of effective medical treatment has been a challenge. Prior to 2013, only three persons are known to have survived infection, two in the U.S. and one in Mexico. In that year, the anti-parasitic drug miltefosine was successfully used in two cases. The time between symptom onset and treatment appears to be the critical factor for full recovery. In one case, a treatment including miltefosine was used within 48 hours and the patient had a full recovery. In the second case, a similar drug treatment was used but not initiated until more than 5 days after symptoms. This person did survive but had signiﬁcant neurologic impairment afterward.

What does naegleria fowleri do to humans?

This article originally appeared in the July 2019 issue of AQUA Magazine and is reprinted with permission.