EDITORS NOTE: In the photos below, John LaTorra (left) is an ICC Board member and Chair of the Awards Committee. Ron Lynn (right), at the time of the photo was the 2009-2010 President of the ICC Board of Directors. His current designation is Immediate Past President. 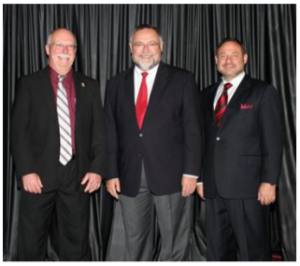 Terrence L. Cobb (center), Director of the Department of Codes and Building Safety for Nashville and Davidson County, Tenn., was presented the prestigious Bobby J. Fowler Award during 2010 ICC Annual Conference in Charlotte, N.C. The Fowler Award, which honors the memory of the first chairman of the Code Council Board of Directors, is given for contributions to the building safety and fire prevention industry that advance the Council’s goals to achieve a safer and sustainable built environment. Emphasis is placed on the recipient‟s focus beyond local concerns to issues and activities that span the globe.

“Bob Fowler was really the driving force that brought us together,” Cobb said of the 2003 Code Council consolidation. “I‟d like to thank each of you in this industry—this very special, underappreciated industry. (Former ICC CEO) Bill Tangye once said, „Protecting the safety of the public in the built environment is the highest form of public service.‟ I believe that and I know that you believe it, as well.”

Cobb, a Certified Building Official, has received several honors including Tennessee Building Officials Association Code Official of the Year, member of the Building Industry of Tennessee Hall of Fame, and as president of the Home Builders Association of Middle Tennessee led a team that set a Guinness world record for the fastest residential home built—five hours, 59 minutes and 59 seconds. The home was donated to the Nashville Area Habitat for Humanity. Cobb also hosts an annual golf tournament for charities that serve children with disabilities. 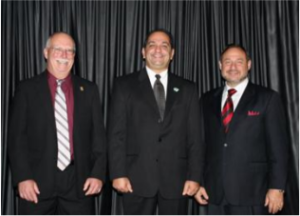 “When individuals buy a home, they can‟t see the foundation, nor can they see the plumbing or electrical or the nails in the walls,” Elbettar told luncheon attendees. “They rely on all of us to make sure they are buying a safe building. They expect to live, work and play in their built environment safely because of all of you.

“Your work is in prevention and is therefore immeasurable,” Elbettar continued. “You do it every day and mostly without appreciation. Nevertheless, let‟s remind ourselves of how much we impact peoples‟ lives, and how many we save in building safety. So thank you very much for this honor, but also pat yourself on the back for what you do every day.”

The Code Official of the Year Award was renamed in honor of retired code official and engineer Gerald H. Jones, who was instrumental in creating the Building Seismic Safety Council (BSSC) at the National Institute of Building Sciences (NIBS), chairing both the NIBS and BSSC Boards, and serving on the NIBS Multi-Hazard Mitigation Council. Jones served for many years as the Building Codes Administrator of Kansas City, Mo., and at Overland Park, Kan.

“Over 40-plus years in this profession, I was privileged to work with many giants,” Jones told attendees. “You‟ve heard many of their names before, and I am truly humbled and honored to be included.” 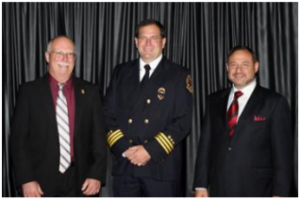 DeCrane was recognized for his efforts to increase the awareness and importance of codes to firefighter safety, and for his leadership of Vision 20/20 Strategy Five—an effort to develop a national strategic agenda for fire loss focused on firefighter involvement in code development.

“I am just a small part of the group that is involved here, and I think everyone in this room does not get involved in this arena to receive an award,” DeCrane told attendees. “But to be honored by your peers and colleagues truly is an honor.”

DeCrane has written numerous published articles and teaches classes about fire and building codes as they relate to firefighter safety. 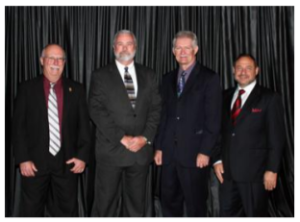 Fort Smith was honored for its efforts to educate citizens about the importance of building safety and developing partnerships through a Good Neighbors program to assist property owners. The department works with its local homebuilders association to distribute brochures and information about building, tornado and fire safety, developed a public service video to highlight common code violations, and provides public education through the city‟s Citizens Academy. This year, the department‟s Good Neighbors program brought 350 young people to the city to upgrade 30 properties. Bailey said the success of the program is due to the efforts of the staff of the Development Services Department. 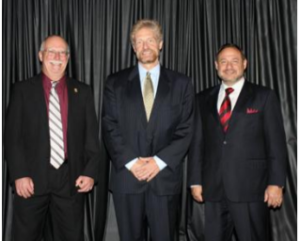 William E. Koffel, President of Koffel Associates, was the recipient of the Code Council Affiliate Award, which is given in honor of John Fies, Wilbur H. Lind and Alton Riddick, who demonstrated unselfish service to the original model code organizations. Koffel has been active in the Council‟s code development process and is known for his role in developing drafts of the International Building Code and International Fire Code. Koffel, a fire protection engineer who started his own firm 25 years ago, is a Past President and Fellow of the Society of Fire Prevention Engineers and is recognized globally in the field of fire protection.

“I‟m truly humbled to be listed with the previous recipients of this award, many of which, for 30 years now, I‟ve been watching and learning from,” Koffel said. “I see participation in the code development process as an education activity. I‟ve learned a lot from it, and I think that enables us to better serve our clients; and secondly, hopefully, we‟re providing information to you, the voting members, so that you can make better informed decisions when you cast your votes on the various code changes before you.”

Gibson Named Educator of the Year 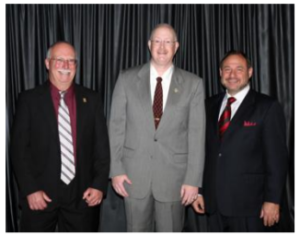 The Educator of the Year Award was presented to John Gibson, a full-time instructor and technical advisor for the Code Council, an online instructor for Red Rocks Community College, and a teacher at the United States Fire Administration‟s National Fire Academy. Gibson, who holds 40 professional certifications, previously was the Director of the Department of Permits and Inspections for Frederick County, Maryland, and is an honorary member of the Code Council and the Maryland Building Officials Association. The Educator of the Year Award is given in memory of Brent Snyder.

“Everyone who has been an instructor can probably identify with where I‟m coming from,” Gibson told attendees. “Number one, you‟ve got a semi-captive audience. Number two, you‟re given a microphone. And then what happens? You‟re told you only have a minute—I can‟t tell one of my good stories in a minute, as most of you know!”

Gibson thanked the multiple facets of his “ICC Family” for their support that leads to the development of education sessions, as well as the code officials who attend. In conclusion, he offered his favorite Irish toast: “To us, may the roof above us never fall in, and may we friends gathered below never fall out.”