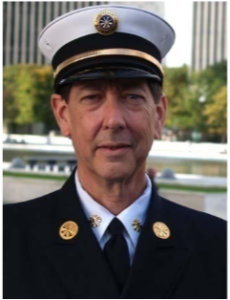 New York Deputy State Fire Administrator John Mueller has been named recipient of the International Association of Fire Chiefs (IAFC) 2010 Excellence in Fire & Life Safety Award (FLSS) sponsored by the International Code Council (ICC). The award honors those who have dedicated themselves to saving lives and property through the development of codes, fire-prevention practices and leadership techniques. The award is presented annually at Fire-Rescue International, scheduled for Aug. 24-28 in Chicago. Mueller is the fourth to be honored with the citation

“John has spent his career improving fire and public safety in the built environment to the benefit of New York State and the country,” said ICC CEO Rick Weiland. “His crowning achievement is the implementation of the safe cigarette law in New York. The statute was the first in the world, and led to the same standard for fire safe cigarettes across the United States. John is active at our code development hearings and chaired the International Fire Code Committee during the past two cycles.”

Mueller’s nomination states fire fatalities attributable to smoking materials have decreased about 33 percent over the four years since the safe cigarette legislation took effect, and suggests other than smoke alarms no other fire safety enhancement has produced results as impressive. He also is commended for organizational- and coalition-building skills.

“I remember that his department was a pioneer in computerizing their fire prevention inspection processes by using hand-held computerized devices to remotely access their office database. I will be forever impressed by his gracious willingness to share that process with my department. It made quite an impression on me,” said Deputy Chief Joe Pierce of the Dallas Fire Department and Chair of the FLSS Section.

The International Association of Fire Chiefs represents the leadership of over 1.2 million firefighters and emergency responders. IAFC members are the world’s leading experts in firefighting, emergency medical services, terrorism response, hazardous materials spills, natural disasters, search and rescue, and public safety legislation. Since 1873, the IAFC has provided a forum for its members to exchange ideas and uncover the latest products and services available to first responders.