How damage determines a tornado’s rating: From Fujita to Enhanced Fujita 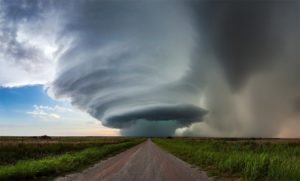 It is nearly impossible to measure the actual wind speed inside tornadoes as they can destroy just about any unprotected weather instruments placed in their path. While ingenious storm chasers and engineers have devised vehicles and instrument packs that can withstand a tornado, a measurement system for estimating the intensity of tornadoes after their impact is used instead: the Enhanced Fujita Tornado Intensity Scale (or EF-scale for short).

The original Fujita Tornado Damage Scale (or Fujita-Pearson Scale) for rating tornado intensity is named after Dr. Theodore Fujita, a University of Chicago severe storms research scientist who came up with the scale in 1971 in collaboration with Allen Pearson, head of the National Severe Storms Forecast Center (currently the Storm Prediction Center). Dr. Fujita’s scale, which ranges from F0 to F5, classified tornadoes by the type and severity of damage the tornado inflicted on human-built structures and vegetation.

The official Fujita Scale category was determined by meteorologists and engineers after a ground or aerial damage survey, ground-swirl patterns, weather radar data, witness testimonies, media reports and damage imagery, as well as photogrammetry or videogrammetry. At that time, there were very few actual measurements of tornado wind speeds that could be related to the damage, but Dr. Fujita used available data — with a lot of educated insight — to devise approximate wind speed ranges for each damage category.

The Fujita Scale had many problems arise when trying to evaluate areas. It was converted into the EF-scale to better correlate wind speed and damage to certain structures.

The EF-scale is a set of wind estimates based on damage.

Numerous damage indicators are used by the National Weather Service to determine the rating. There are 28 damage indictors. These include residences, commercial structures, schools, professional buildings, metal buildings, poles and vegetations.

Each damage indicator has degrees of damage. The survey team matches the observed damage to the degree of damage and estimated wind speed.

When surveying an area, the pattern of damage, not how much, helps to determine if it was a tornado.

A tornado is not confirmed (and does not have a rating) until the National Weather Service has surveyed the damage.

The Fujita Scale was updated in 1973, taking into account path length and width. In the United States, starting in 1973, tornadoes were rated soon after occurrence. The Fujita scale was applied retroactively to tornadoes reported between 1950 and 1972 in the National Oceanic and Atmospheric Administration National Tornado Database. Dr. Fujita rated tornadoes from 1916 to 1992 and Tom Grazulis of The Tornado Project retroactively rated all known significant tornadoes (F2–F5 or causing a fatality) in the U.S. back to 1880.

Below is a brief description of the Fujita Scale. 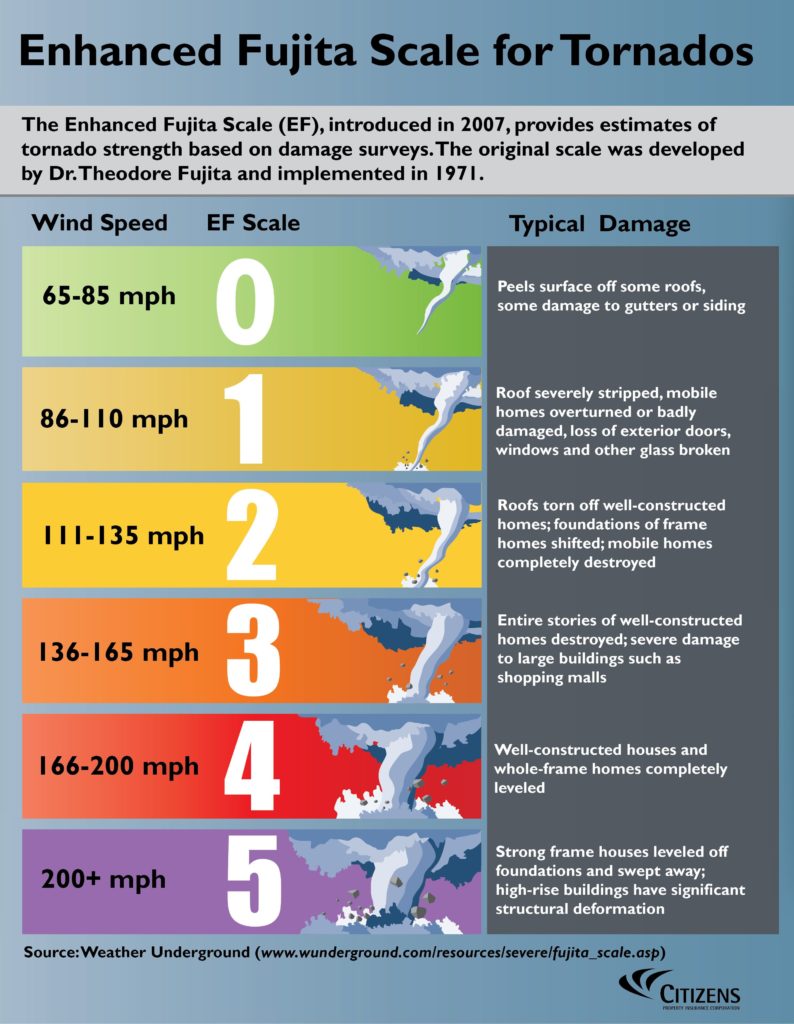 In subsequent years, structural engineers and meteorologists examined damage from many tornadoes. They use knowledge of the wind forces needed to damage or destroy various buildings and their components to estimate the resultant wind speeds. The engineers and scientists eventually determined that the original F-Scale wind speeds were greatly overestimated (too high) for categories F3 and higher. In particular, homes are not built so strongly that 250 to 300 mph winds are needed to destroy them. In some areas, building codes may only require that roofs withstand 70 mph winds. Once the roof is blown off, walls have less support and begin to fail. In other cases, the house frame may not be properly bolted to the foundation. It then begins to slide off the foundation, perhaps partly lifted by strong upward winds in the tornado.

By the early 1990s, even Dr. Fujita recognized these shortcomings and recommended adjusting the assessments. Though each damage level is associated with a wind speed, the Fujita scale is essentially a damage scale, and the wind speeds associated with the damage listed are not rigorously verified. The Enhanced Fujita Scale was devised by a panel of meteorologists and wind engineers convened by the Wind Science and Engineering Research Center at Texas Tech University. On Feb. 1, 2007, the Fujita scale was decommissioned, and the more-accurate Enhanced Fujita Scale was introduced in the United States.

The meteorologists and engineers who designed the EF-scale believe it more accurately matches estimated wind speeds to the severity of related damage caused by the tornado and is an improvement on the F-scale on many counts:

Below is a brief description of the Enhanced Fujita Scale.

According to the National Weather Service, the EF-scale is still a set of wind estimates based on the resulting damage, but uses three-second gusts estimated at the point of damage based on a judgment of eight levels of damage to 28 indicators — including damage to 23 different types of structures such as barns, mobile homes and schools and five additional objects like trees, towers and poles. Wind speed estimates are then provided for each structure and type of damage. The three-second gust is not the same wind as in standard surface observations. Standard measurements are taken by weather stations in open exposures, using a directly measured, “one-minute mile” speed. Guidelines in the original scheme lumped together homes, schools, mobile homes, vehicles and trees in one short description of damage for each F-scale category.

The National Weather Service is the only federal agency with the authority to provide “official” tornado EF-scale ratings. An EF-scale category is assigned based on the highest wind speed that occurred within the damage path. When tornado-related damage is surveyed, trained National Weather Service personnel identify and compare the appropriate damage indicator from more than one of the 28 used in rating the damage. The construction or description of a building match the damage indicator being considered, and the observed damage matches one of the eight degrees of damage used by the scale. The tornado evaluator then makes a judgment within the range of upper and lower bound wind speeds, as to whether the wind speed that caused the damage is higher or lower than the expected value for the particular degrees of damage, which helps to better estimate the range of wind speeds the tornado likely produced. From that, a rating (from EF-0 to E-F5) is assigned. This is done for several structures not just one, before a final EF rating is determined.

A PDF file explaining the development and makeup of the EF-scale is available here.