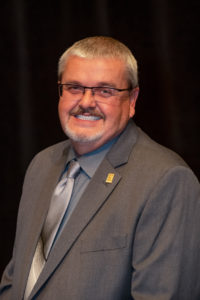 After graduating from his vocational high school in 1984, Ron Hampton, a native of Ashland, Ky., entered the workforce as a carpenter. Since the beginning of his career, Hampton has been an active and dedicated member of the Carpenters Local Union No. 472. Throughout his membership in the union, he has served on a number of committees and served two terms as treasurer.

In 1997, after 13 years in the carpentry trade, Hampton decided to extend his career path to building inspection. He was hired as a level one building inspector in the Code Enforcement Division for the city of Ashland. Over the years, Hampton worked his way up the ranks and earned the title of chief building official.

In 2005, Hampton accepted an opportunity to work at the state level as a field inspector in the Division of Building Code Enforcement, Department of Housing, Buildings and Construction for the Commonwealth of Kentucky. For more than two decades, Hampton has applied his expertise to help advance building safety in Kentucky.

As an established professional, Hampton continuously looks to pay it forward and mentor members of the new generation entering the industry. His advice is new building professionals is to “reach out to your more experienced and mature coworkers and building officials — don’t be afraid to get involved.”

In addition to his mentorship, Hampton has displayed his leadership and dedication to building safety through participation in a number of committees. He holds 34 Code Council certifications and four Kentucky Building Inspector certifications. Hampton was also the recipient of the 2003 ICC Community Service Award and he has been a member of the Code Administrators Association of Kentucky (CAAK) since 1998, serving on its board of directors from 2001 to 2016. He is also the past president of CAAK.

Excited to serve on the Code Council board, Hampton looks forward to continue mentoring and already has his eyes set on running for re-election at the end of his current term. His plan for the future also includes considerations for retirement from the state government, which will open up Hampton’s schedule for a return to his entrepreneurial endeavors, thus reinstating his former code consulting company, H.D. Hampton, Inc. Regardless of his status, Hampton plans to remain as involved as possible in the building safety industry. “I love to be involved and when I am, I’m all in!”