The American National Standards Institute (ANSI) approved the RESNET/ICC Standard 850-2020 — ANSI/RESNET/ICC 850-2020 Standard Calculation and Labeling of the Water Use Performance of One-and Two-Family Dwellings Using the Water Rating Index — which sets the technical specifications for the inspection, testing and labeling of a home’s water efficiency. The development of this standard was the culmination of a partnership between the Residential Energy Services Network (RESNET) and the International Code Council (ICC) dedicated to improving the performance and affordability of resi 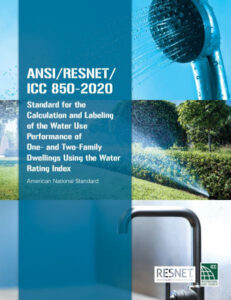 The release of this standard comes at a time when water resources are becoming increasingly strained in many parts of the country with the cost of water prices increasing faster than that of energy prices. Water price increases are not based solely on the availability of water, but also are significantly impacted by the costs to upgrade aging water infrastructure and water utility rate structures. The potential for water cost savings through water efficiency measures is available in nearly all regions of the U.S.

“In response to the strain on water resources and increased costs, the Code Council and RESNET recognize this important need and came together to create the RESNET/ICC 850 standard,” said Code Council Executive Vice President and Director of Business Development Mark Johnson. “The market needed a consumer-friendly index for comparing the savings that different home-efficiency practices could provide. We know that the costs of water and sewage services are rising at rates higher than inflation and these costs are important drivers of housing affordability.”

To address the issue of strained water resources and increased costs, RESNET created the HERSH2O water efficiency rating system, which builds off of RESNET’s nationally recognized Home Energy Rating System (HERS) Index, which is the gold standard for rating the energy efficiency of a home. HERSH2O is a system for rating whole-house water efficiency that includes both indoor and outdoor uses. With the average family spending more than $1,000 annually on water costs, HERSH2O provides a simple, easy-to-compare rating on a scale from 0–100+ (where lower numbers mean less water use). The HERSH2O Index was developed as part of a partnership between RESNET and the Code Council.

Jonah Schein, national program manager for homes and buildings at the Environmental Protection Agency’s WaterSense program said, “WaterSense has supported the HERSH2O initiative from the beginning. We see this as a great opportunity to leverage the rating infrastructure of all of the individual raters who have a great background in building science in the building industry to give them tools and education to be a positive force when it comes to water efficiency in the built environment. Moving forward, we hope that any HERS Rater out there can turn to HERSH2O and provide their clients and builders with an easy-to-understand metric of how efficient that home is performing regarding water.”

“At KB Home, water efficiency is a standard with every home built,” commented Jacob Atalla, vice president of sustainability of KB Home. “With this HERSH2O rating, we now have quantitative ways to measure water efficiency and be able to communicate it to homebuyers. It’s a step toward educating the consumer and for the builder to do better going forward.”

The ANSI/RESNET/ICC Standard 850-2020 will also serve as the technical requirements for RESNET’s HERSH2O system. The national roll-out of HERSH2O will be announced soon with additional information available at RESNET HERSH2O.

Following the approval of the Technical Guidelines by the RESNET board, the standard development process began. The RESNET Standard Development Committee (SDC) 1100 is responsible for the development and maintenance of Standard 1101, an ANSI standard.

The SDC 1100 was chaired by Jacob Atalla of KB Home. Jonah Schein of the EPA’s WaterSense Program served as the vice-chair. Members of the SDC are:

RESNET Executive Director Steve Baden added, “RESNET owes a debt of gratitude to the International Code Council and members of the SDC 1100, and for the countless hours that energy efficiency and water efficiency professionals volunteered on the RESNET working groups that developed the draft standard.”

The print publication is available for pre-order through the Code Council’s online bookstore.